I start the day feeling off, and it doesn't get any better. Nothing serious, but by 7pm I still have quite a headache and feel unnaturally tired. I wouldn't have flown at all today if I was on my own, but I figure with John along to save the day it'll go fine. And of course it does... 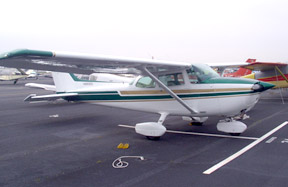 The plan for today is to do the Napa (KAPC) LOC RWY 36L approach in 05D (right), three times around as with the previous lesson's Concord work, and do some holds over Scaggs Island VOR (SGD) in between the approaches. Things are complicated by the presence of a typical broken Bay Area summer marine layer, which means we have to get real clearances this time, and I get to spend a small amount of time in "actual" (not that I noticed much, with the hood on). As with many of the lessons so far, nothing goes horribly wrong, but nothing goes completely right either. The good news is that I didn't have any trouble "seeing" the holds or the approaches, and even when I momentarily forgot about the reverse sensing on the outbound course to the procedure turn I realised what I'd done wrong fairly quickly. I could even anticipate the next step or leg without having my brain explode. On the other hand, my flying was typically sloppy and what Richie Benaud would have called "agricultural", but it wasn't awful. With one exception I was able to cope with the radios (the exception being a particularly complicated-sounding set of instructions that I didn't write down and promptly forgot about a third of as I was preparing to read it back).

We return to Oakland IFR the entire way (SGD, V87, REBAS, vectors), and do the Oakland VOR/DME RWY 27L approach to a full stop. Again, I do OK until the very end, when I let the airspeed and trim get away from me and I lose too much altitude way too quickly; John gets me to look up early. At least I wasn't miles from the centreline.

The real lesson today was -- again -- just how important it is to be able to internalise the relationship between throttle, airspeed, pitch, and trim, and to be able to greatly reduce your workload by knowing well ahead of time exactly what prop and trim settings will give you a desired sink or climb rate. And to be able to estimate what rates are needed for each segment of the approach just by looking at the approach plate. They don't even need to be particularly exact -- just decent rules of thumb. All very easy on the ground, but under the Cone of Stupidity, well, I just don't seem to be able to put two and two together (and when I do, it rarely comes out as four). I'm slowly getting a better feeling for 05D's characteristics, but nowhere near smoothly or accurately enough to pin the vertical bits of the approach the way John does under the hood when I'm observing. Practice, practice, practice, I guess...
Posted by Hamish at 6/17/2004 11:18:00 PM
Email ThisBlogThis!Share to TwitterShare to FacebookShare to Pinterest