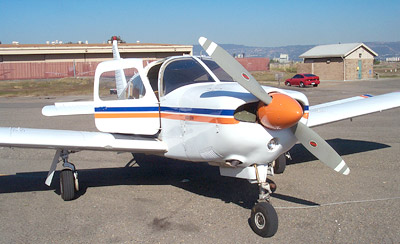 The aim today is to do three things: refamiliarise myself with 29J, a beautiful 1966 Piper Pa-28R Arrow I haven't flown for a long time; see what flying a complex retractable is like when under the hood; and to try Concord's LDA RWY 19R approach as a typical LDA approach.

Overall, things go fine the entire evening. I flew the approach several times last night on my On Top and know what to expect, and, with a little coaching from John, I get it more-or-less OK each time I try it, with no real conceptual issues at all. It's harder than I'd like trying to keep on the LDA close-in, but that's likely to come with practice. I didn't get fooled by the reverse sensing outbound on the localiser, either, which surprised me. The revelation here, both on the approach and earlier under the hood, is just how much more stable 29J is as an instrument platform than 05D (a 172) or the Elite. It just holds its heading and altitude better, with far fewer inputs needed from me, and I don't feel like I'm constantly fighting plane or sim in addition to trying to cope with the approach. Even the landings -- in a plane I haven't flown for months, and that lands a lot faster and heavier than a 172 -- go OK, and I don't forget to put the gear down or how to use the mixture / prop controls like I feared I might (and I'm sure John feared I would :-)).

As we'd discussed earlier, John gets me to do the first approach without the hood, the next under the hood, and the last approach with me doing the radio while John does it under the hood. This works really well -- it gives you a good idea of what's happening the first time around without having to also cope with flying under the hood, and the last time around gives me great radio practice (John generally does the radio at the moment at my request -- I'd guess this won't last more than another lesson, as it's not too hard. I just like not having to worry about that too, at the moment).

On the last approach, with John under the hood, I look around at the last few minutes of Just Another Boring Bay Area Sunset from 3,000' AGL -- the deep purples, blues, and reds streaking the sky, the lights of the City and the Diablo Valley, the sunset reflected off the sloughs and rivers in the Delta, the tongue of fog coming in through the Golden Gate.... There's a small stream of C5A's and C141's a few miles ahead of us in the pattern at Travis. Even from this distance they look huge, slow, graceful.

The main lesson today is -- again -- remember to fly the bloody plane even when you're also obsessing about the approach. Several times I let the plane get away from me (not dangerously, just sloppily), and feel deeply irritated at one point when I just can't seem to simultaneously cope with the finer details of prop / mixture / manifold pressure, and keep the approach within PTS standards. John has to prompt me more than I'd like towards the end of each approach. It's no excuse to say your brain's about to explode and you just can't always remember the finer details of your mental pre-landing checklist (mixture, flaps, trim, rinse, shampoo, wash, etc.) -- you just have to be able to cope with this in real IMC conditions. I guess I don't do too badly, but I'm glad I got to fly 29J at this stage. I'll probably use it for more instrument lessons (plus it has an INOP ADF, which can only be a plus).
Posted by Hamish at 6/10/2004 10:28:00 PM
Email ThisBlogThis!Share to TwitterShare to FacebookShare to Pinterest