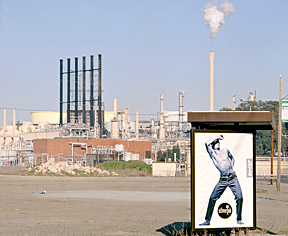 Years ago I used to do real-time process-control work in a large refinery complex on the western edges of Melbourne, in Southeastern Australia. I spent a lot of time working late at night on the cracking towers -- those tall multiply-lighted towers that always seem to have steam and flames coming out of the top and that have endless veins of shiny tubing wrapped around them. The noise was indescribable, even with industrial-strength hearing protectors and earplugs (you could always feel it through the soles of your boots...), but the view was astonishing. The lights, the flames, the holding tanks and Horton spheres, the groups of towers and tubing, everything rose up out of the darkness for miles around -- the original City Of Lights as far as I was concerned.

So when John says "look up!" during the final approach segment just past Concord VOR on the CCR VOR RWY 19R partial panel approach and I see cracking towers and lights a mile or so ahead in the sunset, I'm temporarily mesmerized. Another City Of Lights! Then I think: hell, we're doing 90 knots straight at those towers. And they're only a few hundred feet below us... why am I so far off course? (And will they send F-16's to protect the refinery complex from our little Cessna?) Well, of course, I'm not so far off course -- take a look at the CCR VOR RWY 19R approach plate and notice the 375' obstruction just a mile or so off the centreline abeam the CCR DME 1.5 stepdown fix (where you should be at 640') . It's the refinery tower (one of many in the area). I am flying partial panel, which makes this almost excusable, but it's a sobering lesson in the consequences of sloppy flying and / or how just easily a partial panel non-precision approach can go to hell without the heading indicator to help you as you cross the VOR. John had warned me that the CCR VOR RWY 19 approach, with its dogleg over the VOR and the closeness of the VOR to the airport and final approach course, would be a real challenge partial panel. And he's right. I make a sharp left to intercept the final approach course, get back under the Cone Of Stupidity, and a few seconds later at the MAP I look up and do a normal touch and go on 19R.

The first time around the approach -- without the AI, but with the heading indicator -- had gone fairly well, but this time around with no heading indicator I find it very hard to track the VOR inbound or outbound so close to it. I never really get properly established on the procedure turn (approach doesn't help by asking me to keep it tight and close-in for a Cherokee further out for the LDA approach) or at any time after that; I end up not crossing the VOR overhead but a good distance to the west. In this case I just don't chase the needles enough, which is ironic, I guess.

After the touch-and-go, John asks if he can do the approach; I (of course) say yes, but only if he'll do it partial panel as well. It's an education watching him do it (into Yet Another Boring Bay Area Sunset over the Delta...), but even he doesn't quite cross the VOR overhead. Still, he didn't head straight for the cracking towers, either, and his final approach course heads straight for the threshold.

The fourth time around, partial panel again, I do OK, but this time I have the added help of the refinery towers in the back of my mind, and it suddenly seems easier to cross the VOR (in both directions) and track inbound and outbound without going completely off course. So we head back to Oakland for the ILS RWY 27R, which goes well -- much better than last time -- and as always, the descent into the dark thin stratus layer is cool and worth removing the hood for.

A good lesson, and this time I feel ahead of the plane and the instruments pretty much all the way except for the first partial-panel approach. I just need to trust the needles a bit more, I think, and master the magnetic compass. We started the evening with another instrument takeoff, which could get addictive -- it's quite a rush taking off under the hood, and, as far as I can tell, for the second time running I didn't send any runway edge lights flying or scare anyone nearby -- and from that point on, my altitude and airspeed control went well. I can blame a broken press-to-talk on my side, which relieved me of having to do the radio work (yes!), but even apart from that it felt better than last time.

John's starting to make me think seriously about the cross-country now; Arcata and Ukiah seem like good places to aim for to me, especially given Arcata's endless summer stratus layer (we want as much actual as possible for this). We shall see..
Posted by Hamish at 7/29/2004 11:04:00 PM
Email ThisBlogThis!Share to TwitterShare to FacebookShare to Pinterest