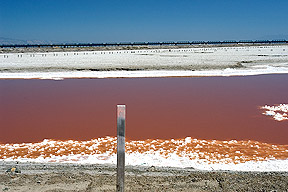 If you fly out of Palo Alto, you know the "Right Dumbarton", a VFR departure for getting to points north and east below the SFO Class B. It takes you out over the Dumbarton railway and road bridges across the salt pans and over towards the east bay coastline. I fly it most times I visit Ye Olde Airporte Shoppe to get back to Oaktown, and I drive through the same Dumbarton Bridge area a couple of times a week visiting Santa Clara for one of my contracts. It's an astonishing place, salt pans, power lines and pylons, discarded junk, bizarrely-coloured water in brackish ponds and sloughs, the curves and straight lines of the bridges, the soft Bay light mingling with the suburban desert glare from the salt... and I spend the afternoon riding my mountain bike around the area, taking photos for a series I'm doing on the area. So by lesson time this evening, I'm tired and sunburned, and probably not the sharpest tool in the toolshed.

At the end of the last lesson, John had simply said that this week we'll do an approach into Watsonville (KWVI), and that I should plan for it, using a departure procedure from Oakland if possible. This seems suspiciously easy -- it took all of two minutes to discover that the Nuevo 5 departure with the SHOEY transition (NUEVO5.SHOEY) dumps us onto exactly the right radial for the VOR/DME approach into Watsonville (the DME arc approach, the only one around here) -- so I turn up for the lesson suspecting that I've missed something obvious and that John's going to spring some sort of surprise on me. But no, there's no trick, just a long two+ hour flight ahead of us down the coast and back over supposedly broken coastal stratus. I know I'll be flying over the Dumbarton salt flats on the way back, but I won't see them this time, of course, in the darkness under the Cone Of Stupidity....

We file a real IFR flight plan using duat.com, do the usual instrument and radio checks, the runup, etc., then sit in the runup area off 27R waiting for a clearance from Clearance. The controller's doing both Clearance and South Field ground simultaneously, and the on-air effect is a series of long unbroken streams of words in a mostly one-way conversation (we can't hear the other side of the ground transmissions) with the occasional break to talk to the rest of us waiting for clearances. The GA side of the field -- North Field -- is relatively calm tonight, but it's a Sunday evening rush hour for South Field (the main commercial and freight side of Oakland Airport), and there's a typical jam trying to get into and out of the way-too-small terminal gate area. We keep hearing rapid-fire sequences of things like "SouthWest 981 you can't take gate 21, there's company there already..." or "Alaska 567 you've got about thirty seconds to start push back or I'll have to hold you for at least another ten minutes", or "Now who the hell is that pushing back! Stop right where you are!" (OK, I made the last one up, but it's pretty representative of what was actually being said). It'd be funny if we weren't sitting there waiting. And waiting. And waiting...

And then it comes:


Blimey. A poetry slam on speed. I get it all down correctly (I had a good idea of what was coming) and then wait another minute or so for him to call us and let me read it back. In the meantime a flustered SouthWest cockpit flunky's having trouble reading back a complex clearance and the controller's juggling more gate / pushback disasters (or, as he'd probably put it, "situations"...), and the entertainment continues.

After all this, the departure itself goes fine, and we follow the Nuevo 5 DP pretty much to the letter except for a couple of vectors for traffic. At one point as we pass some 5,000' over South San Francisco deep in SFO's Class B with me under the hood, I reflect that people would kill for the view I'm paying to block out right now -- the tongues of fog over the Golden Gate and the hills on the Peninsula, the sunset over the Pacific. You know, Just Another Boring Bay Area Sunset. Nothing else to report except a really stupid mistake on my part: the controller gave us a (long) vector to the DME arc from near SAPLY and instead of turning the heading bug I turned the bloody HI card itself. John catches it as I'm doing it; we level out, reset it to the magnetic compass, then proceed back on the vector. Urgh. I would probably have caught it a few seconds later myself, but I spend the rest of the flight cursing myself for this. For years I've had an iron discipline that I use my right hand to turn heading bugs, left for the card (which mirrors the respective sides of the knobs on the instrument in all the planes I fly). For some reason I broke that discipline, with no real effect except embarrassment tonight, but doing something like that on a real approach might kill you if left unnoticed.

Just before we departed, Watsonville was reporting clear skies, with a forecast for scattered clouds at about 1500' and unlimited visibility both before and after our ETA. By the time we're fifty miles out, the WVI ASOS is telling us that there's a 600' overcast. The minimums on our VOR/DME-A approach are 1300'. We debate whether to just shoot it to minimums and go missed without doing the planned circling, or try the localiser or do something else at Monterey or Salinas. We decide to do the original approach. Which we do, to minimums, and it's a reflection on the typical thin stratus coastal layers around here that we descend to minimums over an impenetrable cloud layer without getting into any actual ourselves. We go missed, then head back VFR to Oakland with NorCal.

Even though I've done this approach on both John's Elite and my own On Top, I screw up the entry to the arc in a moment of blank-minded confusion, and although the rest of the approach is OK (especially the altitude and airspeed control) I start thinking the thing with the HI wasn't going to be an isolated incident tonight. I start wondering what else will go wrong. It doesn't take long: after we go missed and talk to NorCal, John vectors me in the general direction of Oakland, then says "direct Oakland when able". OK, we're picking up OAK VOR (I verify the morse), dial in the "to" heading, and start flying it. Over the next few minutes the needle keeps moving left, and I slowly turn the plane more and more to the left, thinking it's a weird wind... just as I'm flying almost due west for what should be a northerly course, John cuts in and tells me to return to my orignal north(ish) heading. I suspect I've done something wrong, but it's nothing obvious: neither of us can see anything wrong with the VOR reception, but for the next few miles the needle deflects to the left. Then it starts behaving again. We suspect there's some sort of un-NOTAM'd anomaly here, or we were just too low, but it was a good lesson. I should have started being more vocally suspicious when I was so far off the course I knew would be OAK direct.

After a long flight under the hood over San Jose, Moffet, Dumbarton, and sundry other invisible-to-me bits of suburbia, we fly the ILS in to 27R at Oakland. Not much to report here except that I held it all together pretty well until the last 100' or so above the DH when I started chasing the needles rather than watching the heading. Never went near full-scale deflection, but it sort of spoiled it anyway....

It's been a long day.
Posted by Hamish at 7/11/2004 11:12:00 PM
Email ThisBlogThis!Share to TwitterShare to FacebookShare to Pinterest