A Friday that starts with less than three hours' sleep after working until 2.30am on a contract in Santa Clara; by 7pm I'm exhausted. But I also think it's worth flying this evening to keep my hand in and because we had to cancel last week; I don't want to backslide too much. This time we'll head out towards Point Reyes VOR (PYE) and do some partial panel airwork, then shoot the VOR RWY 32 approach into Santa Rosa (KSTS), the VOR/DME RWY 14 back into the same airport if we have the time, then head back to Oakland for the ILS into runway 27R. It's a typical luminous Bay Area evening, but there's some lurking coastal summer stratus that may cause us to have to get a real clearance on the way back. 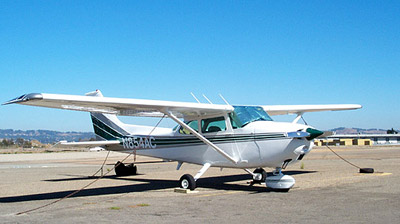 This time we're in N854AC, and startup is normal (at last!). John plays Clearance Delivery and gives me a clearance something like "Cleared to Santa Rosa. Radar vectors to REBAS, then direct Point Reyes VOR. Climb and maintain 2000'; expect 3,800' within ten minutes. Departure frequency 135.1. Squawk 0355." No trouble -- I'm getting much better at hearing clearances like this and writing them down accurately. Well, when I'm expecting them...

I go under the Cone Of Stupidity at about 200' AGL and everything's routine until just after REBAS. John reaches over and covers the AI and then the HI. Hmmm, I know it was on the menu, but I have no real-world experience of sustained partial-panel flying, and don't really know how I'll cope. The very limited amount of partial panel work I did with Dave Montoya for the PP-ASEL didn't really prepare me for much more than getting out of emergencies.

Partial panel work is hard. Partial panel flying typically involves losing either the AI or the HI, or both, often due to losing the vacuum system. It's hard enough to fly IFR without these instruments that the first thing you should do is inform ATC that you've lost the relevant instruments or systems, and, if you're in IMC, declare an emergency. ATC will attempt to route you towards VMC or help with gentle vectors to an airport with (e.g.) an ILS (on the theory that the ILS will obviate needing the AI, for instance). If you're in VMC, you're not likely to get into any real trouble, but following vectors might be difficult.

For me, losing the AI doesn't seem like such a huge deal this time -- at least in one of our 172's, where the AI's are so small and irritating to use at the best of times -- but losing the HI (DG) is a real pain. When you lose the AI, you still (usually...) have the turn coordinator to help keep the wings level, and, as I've observed before, my normal scan has typically relied a lot on the TC for this in any case because the 172's AI is so ... crappy (it'd be different on larger planes with better AIs or flight directors). But without the HI, my workload gets more intense: you have to use the whisk(e)y compass for heading information, and, at the best of times, this is a confusing and cantankerous instrument. I won't go on much here about the failings of the normal magnetic compass, but in real-world use unless you're flying straight and level and not turning or accelerating, it rarely shows an accurate heading. Frankly, this is the first time when it's brought home to me just how useful the old OSUN (Overshoot South Undershoot North) mnemonic you learn all those years ago doing the PP-ASEL is -- when turning just by magnetic compass, it's a huge factor in rolling out on the correct heading. Timing your standard rate turns is also now suddenly a matter of life and death (or would be in a real emergency) -- and being able to quickly calculate the timing needed is a difficult skill under the Cone Of Stupidity (not that hard, really, but with everything else going on it all mounts up). Added to this is the obvious point that the magnetic compass reads "backwards" in comparison to the HI. Yes, I "know" this (I spent my youth mucking about in boats), but it's just another of those things that gets momentarily lost when everything else is going to pieces.... 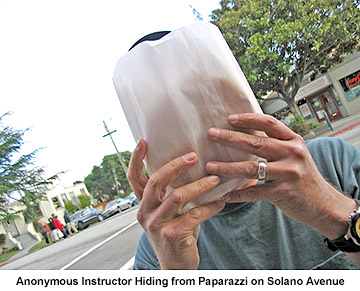 What's harder to simulate on a real flight is how to recognise failing (rather than obviously failed) instruments before they cause too much damage or disorientation (it's all about cross-checking and a certain feel for what's real and what isn't, gained by long experience, I guess). That's where the Elite's going to come in handy...

(As a side note, the FAA has just introduced new PTS rules to cope with new glass cockpit systems where not only is system or individual instrument failure almost impossible (famous last words), but quite impossible to test. Doesn't help me in a little 172 with steam gauges, but it's the thought that counts, I guess).

So John gets me to continue partial panel direct PYE (not too hard, since the VOR provides positive heading guidance), then hold north on the 360 radial, left turns, all partial panel. Under the cone of stupidity it takes a while to work out this means a parallel entry, but that's the least of my problems, and although I probably don't break every damn regulation and protected airspace, I have several brain-exploding moments dealing with the damn whiskey compass on the hold. Timing is everything. Oh well. I'll learn...

The DME arc and VOR RWY 32 approach that follow, under conditions of full and partial panel at different times, go OK, with one moment of confusion here: on removing the Cone Of Stupidity on short final into runway 32 I look up... and I can't see the bloody runway. Just a bunch of undifferentiated city lights and a slightly darker patch where local knowledge tells me the airport should be. Am I that far off course?! John sits there impassively as I mutter "where the hell's the runway?!", then pointedly clicks the press-to-talk seven times. D'Oh! PCL ("I knew that!!"). The runway's suddenly right in front of me. A good micro-lesson. As we're going missed after a touch-and-go on 32, John decides it's time to head back (full panel) to Oakland -- it's been a long workout already, and by the time we get back we've logged more than two hours in the air.

Nothing much to report about the rest of the flight, except that, as seems to have lately become SOP at NorCal, the controller vectored us way too high into the localiser of the OAK ILS 27R. Since we were on a clearance due to a broken layer and actual on the approach at the time, this was a real issue. We fudge it a bit, and the resulting approach doesn't kill anyone.

So what did I think went well and what badly this time? Basically, as usual, nothing went horribly wrong, especially given the lack of sleep. I could have done a better job tracking the localiser on the ILS into Oakland, but that'll come with practice (I still have trouble internalising the tiny (two or three degree) course corrections needed for this). I lost it with the radios twice: once when the Center controller started mumbling something about equipment problems at NorCal, which made me forget the original heading and altitude assignments as I tried to decipher the unimportant bits. The other time was as we were being vectored to the ILS for Oakland -- the sector was busy as hell with July 4 commercial traffic, and the controller spat out long clearances with barely a pause for minutes at an end (it was an impressive performance, I have to admit), and I completely missed the details of the "4AC cleared for the ILS 27R approach..." call. John picked up the debris... And learning to cope with a missing HI wasn't such a smooth experience; I'll need much more practice with my On Top or the Elite.

But I seem to be getting a lot better at the actual flying bits -- altitude control was pretty decent the entire flight (even on the ILS glide slope back into Oakland), and I'm getting a much better feeling for the realities of the vertical profiles for real approaches and how to set them up smoothly -- and even though the approaches and holds are still rough in execution, they're not difficult to follow or to keep myself ahead of the plane.
Posted by Hamish at 7/02/2004 11:04:00 PM
Email ThisBlogThis!Share to TwitterShare to FacebookShare to Pinterest