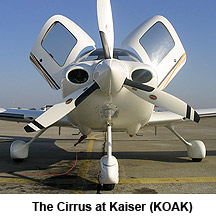 A couple of early evening hours over the Central Valley acting as safety pilot for John in the Cirrus SR22 (John's trying to get as much practice in as possible for his ATP next week). A bunch of approaches (Modesto, Stockton, Oakland), sundry holds, etc. in warm hazy Central Valley autumn conditions. A lot to be learned just by watching...

Given my problems over the last few weeks, the most impressive lesson this evening was watching John smoothly recover from a mistake he made on the GPS approach into Stockton: instead of sitting there dumbly like I probably would have (making things worse), he identified the problem, quickly worked out the cause, then calmly called approach with a confession that he'd screwed up and requested a slightly different clearance. No problem -- and the rest of the approach went smoothly (as expected...). 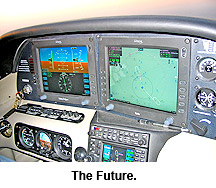 Flying this plane is a lot like flying a video game -- which is probably just the way it should be for instrument flying. The glass displays are large, and -- for the most part -- easy to understand. They include the usual control instrumentation (on the left hand panel), and a large Avidyne display on the right for everything from GPS course guidance (fed by the dual Garmin 430's below the panel) and terrain depiction through TCAD and strikefinder displays to engine status and flight checklists. I didn't think much of the right hand panel layout details, but the overall effect was a dream after 05D's or 4AC's steam gauges. At one point near Stockton I said that I could see a solid line of thunderstorms way out over the Sierra; John turned the display to the strikefinder, and, sure enough, there was a series of strikes well to our northeast. Cool! On the other hand, the TCAD display missed some serious traffic crossing our course at our altitude -- which is predictable, I guess. The nav and control displays sure look like they should make flying in actual or under the hood easier -- or at least a hell of a lot easier than the tiny little AI's and associated gubbins in our 172s. 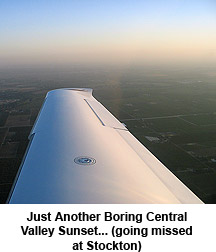 The controls feel stiffer than a 172 or the Arrow, especially in roll, but nothing felt too odd in the short time I handled the plane. The sidestick system doesn't feel natural to me (particularly from the right seat), but it's not something that would cause any real problems with practice. Performance is predictably in a class above either the Arrow or a 172 -- we cruised easily at 175 knots ground speed on the way back, and climb rates were really impressive. And the kick when John pushed the throttle forward on takeoff each time was quite the thrill...

Sitting inside it was somewhat like being in a luxury SUV -- leather seats, a lot of space in the cockpit, cup holders (!), new car smell, the seats feel higher off the ground than the Arrow or a 172... and it drinks fuel just like a large SUV (more so, actually). Plus the engine is smoother and actually quieter than on either of those planes (inside the cockpit, at least). And this particular plane (which belongs to a friend and student of John's) came with Bose ANR headsets on all four seats.... How the other half flies, I guess.
Posted by Hamish at 10/02/2004 08:11:00 PM
Email ThisBlogThis!Share to TwitterShare to FacebookShare to Pinterest