Once Upon An Oakland Winter's Night...

A typical Oakland winter's night: temperature 12C, dewpoint 11C, wind calm, thin scattered cloud at 20,000', altimeter 30.32. A quick jaunt out to Concord (KCCR) for the LDA 19R approach (twice around the block) then back to Oakland for the ILS 27R. The aim tonight: to gently get me back into the swing of things, both IFR and VFR, and to do a club checkout in 2SP, the club's new(ish) 172S that I haven't seen yet, let alone flown (it was added to the fleet when I was in Australia). It's been about 6 weeks since I last flew, and I don't feel too confident about even my basic VFR flying and radio skills, let alone my ability to setup and fly an approach. But I can't wait to fly...

And the results are gratifying: as usual, I don't kill anyone or break any bits of the plane, and modulo a few of the usual recurring Death Grip problems and some rusty radio work during the first 30 minutes or so, I fly mostly to PTS standards and feel pleased with things VFR and IFR (the first time around the CCR LDA 19R approach was about the best I've ever done it). Cool! 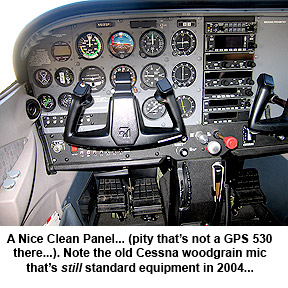 2SP turns out to be a very nice 2001 172S that the owner (and the club) does not let students use for primary training. The checkout's a bit of a non-event -- yes, there are thirteen fuel sump drain points to be individually checked on preflight (at least three of which spray fuel everybloodywhere all over face and hands (as I discover), and yes it's got a fuel injected 180 hp engine that can be a little difficult to start -- but there's nothing about actually flying it that's much different from 4JG (and of course, unlike Lou's Arrow, it has fixed gear and prop so it doesn't require a complex endorsement).

2SP's panel is fairly conventional (with individual instruments that are much nicer than the corresponding ones in most of the other club aircraft -- even the ADF looks like something out of the 90's rather than something from WWII), but augmented by an IFR-certified KLN 94 GPS unit. I don't really get to use the GPS on this flight, mostly because I didn't have time to download the manual from the website, but it seems to have all the right bits in all the right places, and looks fairly decent, if a lot less visually gratifying than the Garmin 530. Predictably, learning the KLN 94 interface and procedures will take a few hours (especially under the Cone Of Stupidity), but after watching John use it as a backup for my steam gauge instrument approaches, it doesn't seem to have any odd quirks or surprises. I'll have to download the manual and absorb it properly for the next 2SP flight.

But the really novel thing (for me) about 2SP is the KAP 140 single axis autopilot installed -- it's simple, easy to understand, and works a dream. John has me do almost the entire second time around the CCR LDA 19R approach with the autopilot coupled, switching between heading and approach mode as appropriate (with reverse sensing on the outbound leg before the procedure turn), and the results are an eye-opener. The ability to concentrate on maintaining altitude and monitoring the approach performance while not having to spend half your brain power keeping the plane stable is a godsend (hey, this is how the Big Boys do it!). Learning how to safely use an autopilot like this (and the various gotchas that come with it...) has to be a plus -- if nothing else so you can use it when the stress levels are up on a real IMC approach into unfamiliar territory. In any case, the PTS says that if I do the checkride in a plane with an autpilot, I must be able to show that I know how to use it properly (which strikes me as more than fair enough). Yes, some people are going to complain that I'll overuse it or that my own wing-leveling / heading control skills will wither, but like GPS, you have to be able to take advantage of new, proven, technologies where appropriate, and you just have to work to make sure you don't lose the other fundamental skills.

Overall, this plane flies nicely -- it's quite a bit more stable than our other 172s at all speeds (even stabler than 4JG can be at lower speeds), and although it costs proportionately more to rent, the quality of the instruments and the availaibility of a decent GPS and autopilot make it a natural for IFR cross countries. As I said, it's a tossup between 2SP and 4JG at the moment...

It rained for a few days earlier in the week, and the ground's still saturated. So with the non-existent temperature / dewpoint spread and the drop from the daytime temperature of about 16C to 10C later in the evening, by the time we return at about 21.30 there's a thin layer of light ground fog developing over the airport. It's eerie -- from 100' up, on the approach, the air is crystal clear, the forward and downward visibility almost unlimited; on the ground, forward visibility is in some places only a few hundred metres. As we taxi back from refueling at Kaiser, the fog swirls thinly around us across the taxiways and aprons; by the time I leave the clubhouse 30 minutes later, the fog's become thick enough to be a real danger in places -- even though you can easily see the stars above. The layer's probably only a few metres thick. It's easy to see how tricky this effect -- very common in Northern California, especially the Central Valley, at this time of year -- could be on landing.

Once again I have to bow to the inevitable -- my contracts (etc.), combined with my earlier bronchitis, are going to delay things even further. I may be able to restart properly early January; until then, I can probably fly only once every couple of weeks. We shall see...
Posted by Hamish at 12/09/2004 10:31:00 PM
Email ThisBlogThis!Share to TwitterShare to FacebookShare to Pinterest