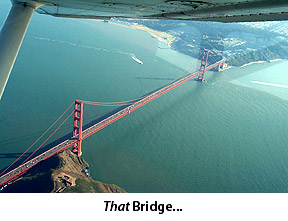 Two leisurely unplanned VFR joy rides in one day, the first real VFR flying I've done in months. Light relief, basically. A meandering daytime cross country over the Golden Gate then up the coast to Jenner, then across the coastal range to Santa Rosa (KSTS) and back in 2SP with Barb, an artist friend of mine, then a nighttime cross country to Monterey (KMRY) and back in 4AC with Boyan, a fellow pilot who's flown with me to Santa Barbara and other places as a rideshare.

The weather's perfect, sunny, calm, clear, and warm, the company's great, and it's all a pleasant diversion from constantly thinking about approaches, holds, headings, etc. Santa Rosa is (predictably) a zoo, and we're cleared to land number six behind a bunch of student pilots while still several miles out. There's even a Jet Provost in the pattern somewhere (but I never actually see it). We slot ourselves into the pattern as smoothly as we can. I count it as something of a triumph that while Tower is continually issuing commands and (quite good-naturedly) chiding a bunch of different pilots for not following instructions or making the wrong entry (etc.), we get the bare minimum of attention and are cleared for take off again ahead of a bunch of other planes waiting around the runway entry who'd checked in earlier than us. Sometimes I think it's my accent... 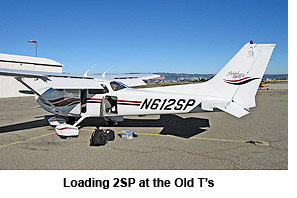 Later, I fly back PIC from Monterey in the right seat, trying to polish a skill I learned a few years ago when John gave me a couple of informal lessons in flying from the right seat (basically, at the time I was curious, but I also think it's useful if you're with another pilot who decides they want you to fly and you don't want to have to land just to change seats, or you're ferrying a plane with a bad push-to-talk switch, etc.). It's not hard, just a little odd at first. I do the ILS back into Oakland (but not, this time, under the hood); from the right seat it's a little harder than usual to see the DG and the airspeed indicator, but it doesn't go too badly, and even if I'm not under the hood it's good experience. The landing goes fine. It's good to do this sort of thing sometimes...

Coming back from Monterey we use my GPS 195 handheld to check progress; just before South County (E16) Boyan sets it to go direct Reid Hillview (KRHV). We've both done this flight dozens of times, and we both know exactly where RHV is, so this is basically just for fun. But when Boyan hands me the unit, it's telling us RHV is about 20nm away, magnetic bearing 330 -- even though we can actually see RHV dead ahead (mag bearing about 030). It seems to think we're about 10nm to the east of where we actually are. We check the satellite reception page -- no anomalies there. A sobering experience -- if we didn't have local knowledge, or were relying solely on the GPS, we'd be heading straight for somewhere like Woodside (OSI) at this point instead of RHV and Oakland. A minute or two later I can actually see RHV's rotating beacon dead ahead -- and the 195 is still telling me to make a 40 or 50 degree left turn on course. A few minutes later it's better, and we don't see any more problems, but I'm not sure what caused the problem -- I've never seen this unit go bad like that before, and there was no indication whatever of any problem, and no NOTAMs for GPS outages in the area. Hmmmm.
Posted by Hamish at 12/18/2004 09:32:00 PM
Email ThisBlogThis!Share to TwitterShare to FacebookShare to Pinterest