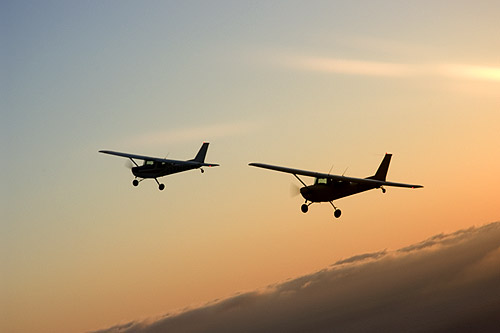 I get to combine work and play by doing some formation shooting in Ginny Wilkins's 172 (with Ginny as pilot...) for the club and for Alameda Magazine with Dave Penney's twin Texas Taildraggers, 31V and 36B over The Bay, Marin, and the Golden Gate. Dave piloted 31V, Ben Freelove piloted 36B (with Gabe Schlumberger as co-pilot and second photographer).

The full (unedited) web proofs from the shoot will be up here for a few weeks (maybe longer). Note: these are lo-res web proofs only, and haven't had proper sharpening, colour balance, cropping, etc., work done on them, so don't get too critical. And yes, the shots suffer from way too much glare in some cases, but there's a couple of shots there that'll survive editing (this was my first attempt at air-to-air photography as opposed to in-air aerobatics photography. I have a lot to learn...). And an hour in formation over the Golden Gate in the warm early evening Northern Californian spring sunshine -- all VFR! -- revives something of the sense of flying I used to get in 36B or the Decathlon...
Posted by Hamish at 3/13/2005 08:18:00 PM
Email ThisBlogThis!Share to TwitterShare to FacebookShare to Pinterest