After an evening doing the Jaded Tourist Thing on the Boardwalk, Muscle Beach, etc., and a great dinner on Main in Santa Monica, it's back to reality. Or what passes for reality in that capital of ostentatious public self-absorption, Venice Beach....

7.30am Saturday, bright sunlight, a cool breeze, the Boardwalk and beach overrun by early-morning joggers and dazed stragglers from last night, cyclists, rollerbladers, little clumps of homeless people sprawled across the grass, dogs, sun-drenched dirt, cigarette butts planted in the sand, an army of dark glasses and shorts, vendors setting up their stalls along the boardwalk, the 737's and 777's silently launching themselves out over the Pacific off LAX a few miles to the south, Santa Monica pier a mile or two to the north, the Santa Monica mountains looming behind the pier and the Malibu coast in the haze... and I'm standing on the beach feeling badly sunburned and marveling at the perfect weather.

We'll do today VFR the entire way, I guess, up the Malibu and Ventura coastlines, past Santa Barbara a mile or two offshore, up the Gaviota pass over Solvang and over Santa Maria to San Luis Obispo for lunch. Then what? I'm not 100% sure, since FSS is reporting some confusing and unusually quickly-changing weather over Oakland and the Big Sur area (showers, overcast, etc.). I'll leave that part until after lunch. Right now I just want breakfast.
* * * 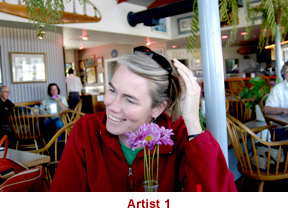 We return to Supermarine at about 11 am and drop the car off. Once again, Supermarine treats us -- two badly-dressed poverty-stricken artists and one really badly-dressed wannabe pilot -- nicely, and we get to sit in the leather-chair and glass-table Executive Pilot Lounge picking apart the ideological underpinnings of the large-format glossy mags artfully arranged around the coffee tables in front of us (hey! this watch is only $12,000! Let's order one!!), while the ground staff tow 2SP out of storage onto the ramp and refuel it (we're clearly not quite the target market for the glossies, unfortunately. Or fortunately. I dunno). We don't do a lot of planning this time -- as I said, it's straight up the coast, and as long as we're clear of the LAX Class B and the various restricted and prohibitted areas, we'll be fine. But there are several of the latter, and it really pays to be careful here -- especially near Vandenburg AFB and the Diablo Canyon nuclear power plant. Nothing unusual or onerous, but I really don't want to have them roll the F16's at us.

There's some sort of fly-in at Santa Monica this morning, and ground is directing planes to an overflow transient parking area while trying to marshal the rest of us as best he can. We taxi to the runup area, then sit there waiting maybe ten minutes for departure, then we're off into the sunshine with the right shoreline departure. 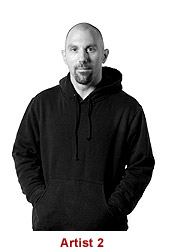 Predictably, the next hour or so up the coast and inland to San Luis Obispo is beautiful, a privileged view of the Malibu, Ventura, and Santa Barbara coastlines from about 3,000', the typical Southern Californian mixture of sunshine, blue skies, blue-green seas, rugged islands, jagged mountains ... and suburban sprawl. Even Malibu looks overrun. My passengers are mostly silent as they just look out and watch. We pick out the old Getty museum in Malibu below us. Not quite the same scale as the new version over the 405 (one of my fave LA sights is the Getty shrouded in fog late at night from below on the 405), but still impressive in context. Barb flies a significant portion of the leg under my command; Scott just sits in the back waiting for a chance to have his next cigarette (this is payback for all those times I've hung out in his studio enveloped in a cloud of smoke watching him paint or construct another piece :-)).

We land at San Luis Obispo into the usual stiff headwind and confess to ground that we don't really know where to park for the restaurant, The Spirit Of San Luis. Ground cheerfully directs us to the (really obvious) parking spot right in front of us (D'Oh!) and wishes us bon apetit. We're all hoping it's better than the caff at Santa Maria -- we're hungry, dammit. And once again I need coffee. And Scott needs that cigarette....
* * *

The Spirit Of San Luis turns out to be one of those great little small-town airport institutions -- good California food, cheerful staff, a healthy mix of locals, travellers, and fly-ins, a nice view of the airport and surrounding areas, and better coffee than most such places. As with the Arcata trip I just have to try the fish and chips. Not bad -- not as good as the Arcata version, but still definitely recommended. Barb tries the fish and chips as well; Scott has a hamburger from which he carefully removes anything resembling salad. We spend a relaxed hour or two over lunch (including dessert...), then stagger back to the plane. I realise I haven't a clue how to get it refueled, but a short walk across the apron next to the Gulfstreams and Citations to the San Luis Jet Center sorts that problem out (yes, another Executive Pilot Lounge where we're actually made to feel welcome, and where a fully-uniformed G5 or Citation pilot about my age walks up and asks me -- earrings, torn black jeans, broken shoes, funny accent and all -- what's the weather really like out there? in a friendly and interested way; we talk a few minutes about the weather and the joys of flying along the coast VFR... what's the world coming to?! Maybe we are in Kansas).

We depart VFR for the north after an FSS briefing that tells me the weather's basically now OK all the way from here to Oakland. The departure's an eye-opener -- the terrain in the immediate vicinity of the airport explains all the various departure procedures and approaches. Lots of small (less than 5,000') jagged-topped hills and rugged ridges in all directions except the northwest. I'll bear this in mind the next time I'm down here on the ILS...

The flight back to Oakland goes smoothly -- nothing much to report here except we see the same brightly-coloured blimp we saw approaching Santa Maria now tied down below us at Hayward (KHWD) as we approach Oakland (that must be a slow trip...), and the subtle change in light along the East Bay hills as we descend over Fremont (the quality of natural light in the Bay Area is one of the things that attracted me here in the first place; Ed Ruscha (speaking of Artists, this time with a Capital "A"...) has a mordant little riff about it in a NYT Magazine interview a week or two ago which struck a chord with me).

Some five hours after departing Santa Monica, we're back on the tarmac at Oakland, taxiing to the Old-T's. I'm even more sunburned now, and I can tell from the fidgeting in the back that Scott's just dying for another drag.
* * *
After being handed off to Oakland tower, we hear the controller give a mild on-air admonishment to an out-of-town pilot for doing something potentially dangerous. The controller's familiar to me, a decent and accomodating kind of guy (at least on air), and it should end there with the pilot's mea culpa (sincere or not). But the pilot decides to fight back, and for the next few minutes he escalates the exchange to the point where he's given a number to call and basically had the riot act read to him. Throughout the entire exchange the controller keeps his cool and sounds polite, if at times a little exasperated; the pilot sounds sarcastic and combative. I don't know what's going through the pilot's mind, but rule one around here at least is just own up to the mistake (even if it may not have been entirely your fault) and get on with it. Oakland tower's pretty forgiving, at least in my experience, and in six years of flying out of Oakland I've never heard it get that bad on-air. I once accidentally busted Hayward's Class D while still with Oakland's South Field tower; tower asked me if I knew where I was -- I looked around and thought, uh oh!, I know exactly where I am (in deep shit) -- and I just apologised and said (with my best Australian accent) that I hoped I hadn't caused an international incident or anything. Tower laughed and basically just said please don't do it again...
* * *
I logged about 7 hours total time for the trip; somewhere over the Malibu or Ventura coast I reached the big 500 hour mark (about 20% of which are taildragger hours). Woohoo! OK, so most of the aviation blogs I read are written by people with billions of hours logged, and this really isn't much of a milestone, but hey, it's been fun so far...

Posted by Hamish at 6/18/2005 10:45:00 PM
Email ThisBlogThis!Share to TwitterShare to FacebookShare to Pinterest

I will add your site to my page. keep the updates coming!!

Clint -- thanks! I enjoyed reading your Outer Marker too, and will add it to my blog lists as soon as I can remember my blogrolling password...

And as someone who got his complex sign-off in an old 180HP Arrow which has now been sold (meaning I can't fly it any more), I'm envious of your flights in the "Skarrow"...