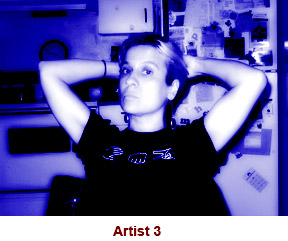 A nice VFR flight up the coast in perfect California VMC with Artist 3, a friend with a sculpture studio near my own studio in Oaktown, and with whom I'm collaborating on some arty-farty photo and web projects. We'd originally planned to fly to Crescent City (KCEC) together from Hayward (KHWD) in 8TA to pick up one of her glass castings from a foundry up there, but that flight -- which would probably have involved a fair bit of real IFR in IMC, with an ILS to near minimums in the persistent coastal stratus at Crescent City -- has to be postponed because the foundry isn't ready, so instead we potter up the Marin and Sonoma coasts past the Golden Gate, Bolinas, Point Reyes, and Jenner, then inland to Santa Rosa (KSTS) for a break. The weather's perfect, Artist 3 discovers that she enjoys flying, and we spend an or hour two gossipping about (amongst other things) Artists 1 and 2 (and Artist 4, who hates flying, and Artist 5, who I think I've offended, and who'll probably never fly with me). Yes, it's a small, inbred world I inhabit.

We stop again at Napa (KAPC) on the way back and discover that the apron's chock-a-block full of shiny business jets, expensive-looking piston twins, and a fleet of aerobatic Yaks. We never find out what the occasion was, but I've never seen the ramp at Napa that full before. We grab the last available transient parking spot after a mad dash across several lanes -- just like parking in The City, including successfully heading off a likely competitor in a Cherokee with some deft shortcuts -- and park between a couple of Bonanzas. Inside the terminal's airport shop we browse the kitschy flying toys and knicknacks, and debate whether to buy anything; in the end we just sit around in the cool air for a few minutes and watch the people come and go at Jonesy's (not quite our cup of tea, but never mind, it's famous, dammit!). Then it's back over the beautiful colours and shapes of the lower Delta to Hayward.

Not the 600 NM IFR trip I'd obsessively planned all week, but a nice flight anyway.
* * *
During pre-flight I somehow manage to slip while checking the seatbelts, and bash my forehead against the door frame. It's painful, but I don't think much more about it until Artist 3 looks at me a little oddly and says I have blood all over my forehead. Hmmmm. I wander back into Cal Air's office and get a similar (but rather less blase) response from Linda behind the desk. Turns out I've cut my forehead fairly impressively, and a couple of bandages later I look like some sort of beaten up homeless guy (especially since I'm limping slightly from an earlier injury and am wearing my Worst Clothes Ever). I spend the rest of the day making up stories about how it happened. It's amazing how much a small almost-painless shallow cut on the forehead can bleed...
Posted by Hamish at 9/25/2005 10:52:00 PM
Email ThisBlogThis!Share to TwitterShare to FacebookShare to Pinterest

You have some good-looking artist friends. And this one isn't accompanied by a big artist dude who looks ready to snap me in half!

Yeah, Artist 3's a keeper :-). Plus she's got some works in a show opening this week in San Francisco, too, so she's definitely smart and talented :-).

And you're definitely right about flying with friends who don't know much about flying -- it's a very different mindset, and a lot of fun.