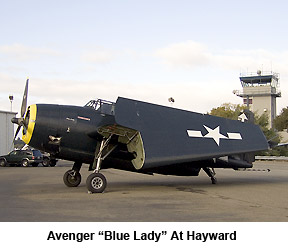 A good sustained workout under the Cone of Stupidity in night VMC: a short IFR flight to Stockton (KSCK), a few times around the ILS 29R and VOR 29R approaches there, a bunch of holds on the associated published misseds, then IFR back to Hayward (KHWD) for the LOC/DME 28L. An attempt to keep comfortably current (as opposed to just legal), and, once again, to master the intricacies of the KAP 140 autopilot under the hood.

It starts with a short 10nm VFR hop from Hayward to Oakland's Old-T's to pick up Boyan, my safety pilot and sometime flight-share partner at the AAC clubhouse (yes, I'm still a member). Once he's on board we call Oakland clearance to see what they'll offer us in response to my filed KOAK V244 ECA KSCK (a route I've filed and flown many times in the past): "Cessna 0SP cleared Stockton airport via the Nimitz 2 departure vectors for victor 244 then as filed." Hmmm -- that Nimitz 2 has me a little surprised -- I know it exists, but I'm not familiar with it at all, and due to the endless problems over the last two or three years with OAK VOR, it's never been issued or available. Until now. I read the clearance back, thinking "no problems, I'll just grab it out of my bag...", and proceed to get Boyan to find the appropriate plate. One look at it makes me wonder what clearance is thinking: although I've put "DEPARTING OAKLAND RWY 33" in the remarks of my flight plan, and even though I actually said explictly as part of my call to clearance that I'll be departing 33, they've issued me a DP that's not applicable to runway 33. D'Oh! The DP itself is trivial -- basically a heading and a VOR radial -- but it makes no sense for departures off 33.

I contemplate calling Deliverance back and querying it, but I have a better idea: I'll call ground, where I just know from past experience what's going to happen. Sure enough: "0SP taxi 33, and, uh, I've got an amended clearance for you: on departure, left turn heading 310 then vectors for V244". Oakland clearance never seems to connect the dots here with the runway 33 thing; Oakland ground always seems to be the one to stitch things back up properly again. I stifle the urge to make some sort of snarky reply, and read the new clearance and taxi instructions back. A few seconds later there's a familiar voice on frequency: "Hamish?" "John!". In the next minute or so I hear ground giving taxi instructions to John and his Caravan. Once again I blame my accent.... 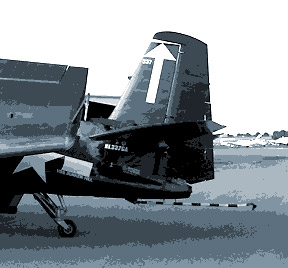 We get cleared direct JOTLY (the LOM at Stockton) a couple of minutes after departure, and the rest of the flight itself is a lot more fun than I'd expected, even if it didn't turn out to be the autopilot workout I'd anticipated. I'd really planned to do about half the flight continuously with GPS and the autopilot to see if my brain exploded under the hood with the effort to make all these damn things work together under a real (changing) workload, but I unexpectedly enjoyed hand-flying the plane so much that the only time I engaged the AP was on the first (vectored) ILS approach into Stockton (just to prove I could do it), and during the en-route bits when I needed to look at charts, etc., or I was getting bored. I really hadn't expected to look forward so much to donning the Cone Of Stupidity, but I caught myself several times impatient to put the hood back on after departing or the latest touch-and-go. Not quite how I felt this time last year during the whole instrument training experience :-).

Nothing much else of note in the flight itself except the long string of Southwest and United 737's heading for Oakland's 29 being vectored in front of and above us on the way back into Hayward (and my constant worries about the resulting wake turbulence), and the ghostly feel to Hayward after the tower closes at 9pm. You cancel IFR on the ground through Oakland tower at that hour (as we discovered), which isn't too hard, but in this case I decide to cancel on the change to CTAF -- I guess I just don't fly IFR into enough uncontrolled fields to make IFR cancellation on the ground a reflex thing, and don't want to cause an incident or anything.

One other thing: 0SP has a working Stormscope. It's not exactly obvious how it's supposed to work (I'll get the manual next time I take 0SP out), and not as useful around here as it might be in stormier climates (we get maybe two or three thunderstorms a year here), but a nice touch anyway. Can't help thinking 0SP started its working life in Florida or somewhere like that....
* * * 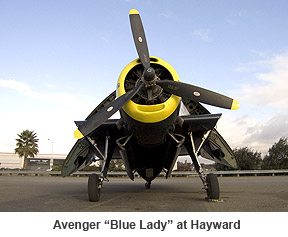 Wandering across the ramp to get to 0SP on the green ramp, I almost literally stumble into this huge old warbird just outside the Cal Airways office. It's a taildragger with a tailhook, folding wings, and a greenhouse-style cockpit; as Boyan says later when he sees it: "You could stand up in that cockpit!" -- it's much larger in real life than it looks in the photos here...

I have absolutely no idea what it is -- it's too big for any of the carrier-based WW II fighters I know about -- and there's no one around to ask. Bloody impressive -- the sort of thing you're more likely to see in Oakland, but it's pleasing to know that it happens in Hayward occasionally as well.

[Later edit -- I returned the next day and took the photos here. The plane's a TBM Avenger, "Blue Lady", and has quite a history, apparently -- HR].
Posted by Hamish at 11/10/2005 10:22:00 PM
Email ThisBlogThis!Share to TwitterShare to FacebookShare to Pinterest