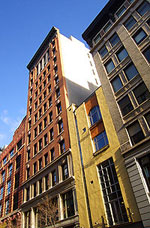 No GA in CA for me, again, for a while — I'm in New York, on assignment in our Chelsea office (hip digs, to be sure — see left…), surrounded by the media types I secretly want to be when I grow up (ah, Fashion. Life's tough, eh?!). But while there's no GA, the Expressway Visual 31 approach into La Guardia — while listening in to ATC on United's channel 9 from a window seat in the first class cabin — now that's flying: after having been asked to keep up our speed all the way from SWEET (?) intersection through reporting the tanks in sight to the sharp right over the expressway, the resulting short swooping approach over Shea Stadium and tight full reverser sound-and-fury landing in the 757 from Denver's quite the experience. No, that's what I want to do when I grow up.
Posted by Hamish at 10/24/2006 09:33:00 AM 4 comments
Email ThisBlogThis!Share to TwitterShare to FacebookShare to Pinterest

Get In And Go!

One of those "Just get in and go..." flights: a brilliant warm sharp utterly cloudless autumn evening, a somewhat impromptu VFR flight in one of Cal Air's older 172SP's to… who cares?! In the end it's a quick hop over the hills from Hayward (KHWD) to Livermore (KLVK) for some night pattern work ('round and 'round…), then a leisurely slightly-longer hop out to Sacramento Executive (KSAC) for no reason at all except that I enjoy the sights of the Delta at night from 3000' (the lights of the various cities and towns, the roads traced in red and white, the reflections on the dark sloughs and canals, the 2,000' towers near Locke), and because it's a lot of fun just … arriving … without a flight plan and without obsessing about altitude, heading, final approach fixes, missed approach points, etc. Light relief, I guess. At Sacramento we swap seats and Boyan (my usual flight share partner) flies us back to Hayward VFR with flight following, and I get an even better view of the view. Mesmerising.

OK, so my landings weren't as good as they should have been, and I was a bit rusty on the VFR side of the radio work, but I didn't break anything or kill anyone. A lot of fun.
Posted by Hamish at 10/18/2006 11:07:00 PM 0 comments
Email ThisBlogThis!Share to TwitterShare to FacebookShare to Pinterest

It's Fleet Week, and the Blue Angels are in town. Not only that, but this year Fleet Week coincides with the Red Bull Air Race here in San Francisco. Lots of TFRs, but who cares? It's aerobatics paradise, and the sight of the Blue Angels practicing twice a day over Downtown and Fishermens Wharf (and I mean over — a lot of the maneuvers are done above the City rather than over the Bay), and passing the building I work in a few hundred metres away, a few hundred feet AGL… well, what a sight. And the sound's astonishing, it's loud enough to regularly set off car alarms in the streets around us, it reverberates around the canyons between the buildings, it creeps up on you suddenly in the back alleys 'round here. And it's all free!
Posted by Hamish at 10/06/2006 11:08:00 AM 0 comments
Email ThisBlogThis!Share to TwitterShare to FacebookShare to Pinterest
Newer Posts Older Posts Home
Subscribe to: Posts (Atom)