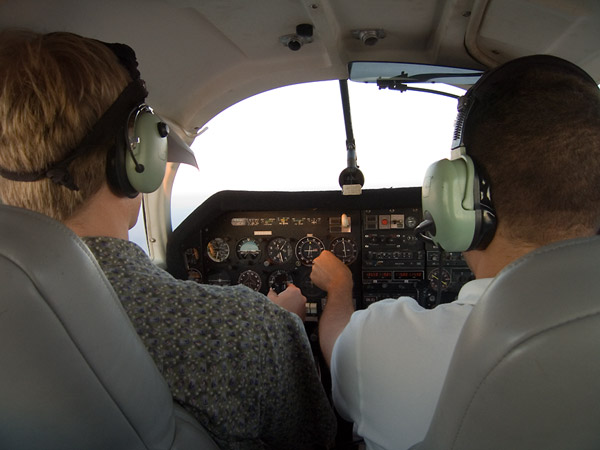 I wake up stupifyingly early, maybe 7am, and have a quick breakfast at Javarama in Alameda. I'm not sure how today's going to sort itself out (or, indeed, if anything's going to be sorted out today at all), but I suspect there's going to be a fair bit of traveling involved if Alex has been successful with the alternator. Strangely, I feel physically pretty damn good, maybe a little too sunburned, but not especially tired or anything. I potter about my studio trying to blog the earlier bits of the trip, but since I don't know how the story ends yet, my heart's not really in it. I read email. I walk around the block for exercise a couple of times. I browse the blogs of the other Usual Suspects. I just know it's not worth actually doing anything sustained yet…

Sure enough, at about 11.30 Alex calls and says he's got good news — the alternator's been repaired. And could I drive to Sacramento to pick it up … right now? Sure, I think, I could actually enjoy doing that, especially if we can get 75T back this evening. And that's his plan, so at about midday I drive the 90 miles or so through the oppressive Central Valley heat to the electrical repair place way out the other side of Suburban Sacramento. I meet someone I'll call "Mike" in the repair place (he's been told ahead of time that I exist, apparently), and this rather engaging, odd, wild-haired older guy goes over the paperwork and tells me what happened. He's worked on quite a few Cirruses before, apparently (mostly at MacLellan), and he's impressed that Alex managed to get 800 hours out of the alternator — the ones he's familiar with don't usually last unrepaired more than about 500 hours, if that (I'd already heard similar things from other people). Plus he's never seen one of the older belt-drive alternators like this — they're mostly geared nowadays. Still, the alternator's ready to go, and the paperwork's properly signed sealed and delivered, and I call Alex and discover that he's arranged to fly the club's Mooney back to Skyblue at Camarillo (KCMA) with me and a student of his at 18.00. I'll ferry 75T back after he and the Skyblue A&P install the alternator. I'm up for this, too, so after a few minutes of electrical shoptalk (yes, I was an electrical engineer in a previous life, albeit in electronics rather than electrics) I drive the ninety miles back through the heat and traffic to Oakland. 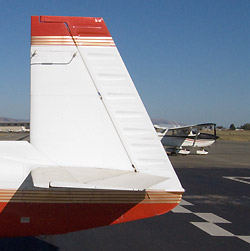 An hour or so later I park at Hayward (KHWD) outside CalAir. I check out the keys for the Mooney, and go out to start preflighting. Although I have a complex endorsement and a bunch of hours in an Arrow, I'm not checked out by the club to fly the Mooney, but I might as well get acquainted with it ahead of time, and besides, I'm curious — I've never actually flown in one before.

The club's Mooney turns out to be an older version, with an absolutely classic of-its-time panel full of ADFs, LORAN, ancient radios, etc. No GPS. No DME. An autopilot that looks like it's entirely mechanical, or at least uses tubes for guidance. A confusing array of switches. A weird panel layout. Yes, this plane would be, umm, fun to fly IFR… luckily it's forecast clear VFR there and back. Not really my cup of tea, the Mooney, but I guess you can see why they have devoted fans. They're supposedly fast and efficient. We shall see….

Alex and his student Eric turn up around 18.00, and after the usual formalities and procedures, we're heading off into the wild blue-turning-yellow-and-purple Southern Californian yonder. Alex has arranged with Skyblue for one of their A&Ps to be around when we land (original ETA 8pm, which we're not likely to make). I'm in the back seat, which isn't as bad as I'd expected. The intercom isn't working for me in the back, but other than that, it's just enough space for someone of average height and average weight (i.e. me). The Mooney seems to fly nicely, if a little stiffly, and it's surely not the slowest plane I've ever flown in. For much of the next two hours or so Alex has Eric under the hood as part of his instrument training, and we track down towards Camarillo pretty much the route we'd do for an IFR flight plan; we get flight following with vectors for the firefighting TFRs, and I just sit in the back and watch the usual beautiful California landscape go by. Around Santa Barbara the smoke's as bad as it was for me a couple of days ago, but it's basically clear VMC away from the smoke.

We land at Camarillo and taxi to Skyblue. The next hour or so is taken up with reinstalling the alternator. As the Boys are putting the finishing touches on the alternator (photo above), I realise I'm bloody starving. I had a croissant for breakfast about 14 hours ago and a minimalist lunch at about 11.30 before driving to Sacto, and, well, dammit, it looks like more junk food for me this evening. I discover a packet of Kettle chips in the bottom of my backpack (I sort of suspected I'd be late and hungry today…), and I find the yogurt health (ha!) bars I'd stowed in my flight bag yesterday. Not too bad. They'll keep me going another six hours or so.

After a bunch of testing and paperwork, Alex flight tests the alternator and electrical system in the pattern for a while, then we're good to go. We discuss the plans for the return trip. We'll get flight following back as a loose flight of two, with me leading and navigating, and Alex in the Mooney doing the radios and squawking appropriately. We'll use the air-to-air frequency to communicate between us. Both Alex and I have done formation flying before, and as long as he stays a reasonable distance away from me, I'm up for this. Especially since I have the nice GPS for navigation, and it's good to have the Mooney around in case I have to land at King City or somewhere equally out of the way on the way back if the alternator fails again.

After refueling the Mooney we depart Camarillo at about 22.00. It's an almost moonless night, very dark, but the area's fairly well-known to me, we have flight following (with, again, vectors around the TFRs just to be sure), and both the GPS and the autopilot in 75T work wonderfully. Alex has Eric in the Mooney some distance behind me second guessing my course and doing VOR radial versions of my course and cross-checking my GPS distances and estimates with Eric's manual versions (I picked a course that would make it easy to follow along with VORs — what's the fun in Camarillo direct Hayward?!). About the only surprising thing about the return flight is that the Cirrus consistently seems to out-perform the Mooney, even with my rather conservative power settings. At somewhere around 2500 RPM / 23-25 inches MP the Cirrus slightly outclimbs and outcruises the Mooney, at least during this trip. This doesn't seem right to me, but the Mooney's quite old, and the Cirrus surely can't be called slow, even if it doesn't have quite the speed demon image that the average Mooney's supposed to have.

Nothing goes wrong with the electrical system, or anything else, for that matter, and we land back in the cool still air of Hayward sometime after midnight. It's good to be back. I park the Cirrus in its new spot on the Green Ramp and meet up with Alex and Eric at CalAir for the inevitable paperwork. I finally get home about 1am.
* * *
A few hours later I'm woken suddenly and violently by a fairly major tremor epicentered close to where I live in Oakland. It's been that sort of day for me now, a couple of days in a row…

Posted by Hamish at 7/20/2007 08:59:00 PM
Email ThisBlogThis!Share to TwitterShare to FacebookShare to Pinterest

Not sure which model Mooney that is, but the older ones (with the non-standard panel) won't have the HP to hang with a Cirrus. However, in my M20C, the O-360 gives me 140 kts on around 9 gallons per hour, making it a very efficient traveler. There aren't any certified planes in the same price range that I would trade it for. I have a standard 6 pack & IFR GPS, and will take it anywhere (within sane reason).

The later models (J & above) should true out around 200 MPH, but I've never flown one.

I'm not too sure which model it was (all Mooneys look alike to me :-)), but I can't help thinking it was probably just our lack of familiarity with that particular plane, and (perhaps) a mild rigging or tuning issue. Nothing serious, but it was a little surprising....

You were obviously flying an older Mooney. A newer Mooney blows the Cirrus away. My Ovation trues at 194 kts at 9,000 feet. It uses the same engine as the Cirrus SR-22 but the Mooney is derated to 280 hp while the Cirrus uses the full 310 hp.

The Cirrus SR-22 is not a fast plane when compared to the long-body (late model) Mooneys or the Columbia aircraft.