I can still smell the smoke from the big brush fires above Santa Barbara as I cross OHIGH intersection on the Fernando Five (FERN5) arrival. 145 knots ground speed; 9,000' MSL. Beautiful rugged country below me in the post-sunset, hints and glimpses of dark-tone mountains, canyons, and chaparall. It's mid evening, getting dark, and there's the usual LA area haze as well as the smoke, but you can see bright smudged hints of the city in the distance. Southern California Approach tells me to expect vectors for the ILS. I cross CANYN intersection, still at 9,000', then turn to UMBER intersection over Filmore VOR. SoCal has me descend (rapidly) to 6,000' immediately after Filmore. I can hear SoCal Approach vectoring a Hawker onto the localiser a few miles in front of me, and a Citation on the arrival behind me; I'm the slowpoke in the middle. I'm almost immediately vectored with a sharp(ish) turn towards the localiser and asked to slow down for the aircraft in front of me. There's one for the books, I think: we small GA pilots are usually asked to keep as fast as possible on the approach because of the faster traffic we mix with. Cool! I briefly wonder what the Hawker thinks about being overtaken by a mighty Cirrus, but I suspect SoCal have the same staffing issues that NorCal has, leading to botched spacing and ad hoc vectors with newbies at the scopes….

In front of me and off to my right LA's now a blaze of light smeared across the hills and mountains, and my brain keeps misplaying the old Doors lyrics as "City at night, city at night!" over and over (no, I'm no Doors fan (understatement), but LA and the Doors have History, you know). It's beautiful, and the smoke and haze and warm air has everything on the ground shimmering or slightly veiled. I can easily pick out the Van Nuys (KVNY) runway 16R lights as I turn towards the localiser (I have a certain amount of local knowledge here so I know exactly where it should be in relation to the 405 and the other main landmarks down there). I'm cleared for the ILS RWY 16R, and a few seconds later I've joined the localiser, and a little while later I'm on the glideslope. This is a steeper than usual glideslope (take a look at the terrain around here…) and the final approach segment is also rather long — roughly 8 miles with an intercept altitude of 4,300 MSL (for a runway at roughly 800' MSL), but otherwise it's a pretty straightforward approach.

Tower clears me to land after the Hawker, and 16R floats up towards me in the darkness in that very familiar unreal videogame-for-real intense concentration way I find so enjoyable. After a book-perfect approach I'm over the threshold and a few seconds later I'm on the ground in the muggy warmth surrounded by lights and aircraft. I'm told to exit 16R at November, and that's what I do, with the Citation not far behind me on final.

So that's Van Nuys One Six Right in real life, I think. Cool! It's tempting to say it's a special thrill, a really distinctive experience, but really, it's the views of LA and the approach and descent into the airport environment at night that's the thrill, and Van Nuys may be the busiest GA airport in the US, but it isn't proving any harder to cope with than my native Oakland (KOAK) or Hayward (KWHD) — I've been trained well. At least that's what I'm thinking until I fluff the ground call on exiting 16R at taxiway november and hear the mortifying and very public "75T, you're still on tower frequency…". D'Oh! I taxi to Skytrails, park, and a few minutes later (thanks to the excellent ground staff at Skytrails) I'm on the 405 in a little rental car bound for the hotel in Santa Monica.
* * *

This is another of those always-wanted-to-do-it trips, and a combination of a break in jobs and having seen One Six Right a few weeks ago gives me a good excuse. Unfortunately there's not enough notice to drag the Artists (or anyone else) along with me this time, so I go alone. An IFR flight to Van Nuys via San Luis Obispo (KSBP), an overnight stay in Santa Monica, and a leisurely VFR trip back up the coast (lunch at San Luis Obispo maybe) all seem like a good idea to me, and I have the time (if not really the money), so I organise, plan, and arrange things over a few days, and at around 16.30 I'm sitting sweltering in the club's Cirrus on Hayward's Green Ramp getting my clearance to San Luis Obispo from Hayward Clearance. A few minutes later I'm departing on the familiar dogleg route ("runway heading until 400', left turn heading 160, radar vectors for ALTAM, V244, Manteca VOR (ECA), V113, Paso Robles VOR (PRB), direct", and there's really not much to say about this leg of the trip except this time at least I remembered to put on some sun screen, and the ground below and airways all seem very familiar nowadays.

I stop for fuel and food at San Luis Obispo, and spend a pleasant hour or so eating decent American Diner food watching the planes out on the ramp and runways at the Spirit Of San Luis restaurant at the airport. This is one of those unusual airport cafes where the food really ain't bad, and where locals go to eat with no intention of flying. It's an almost ideal place to stop and eat if you're flying GA to LA from the Bay Area. 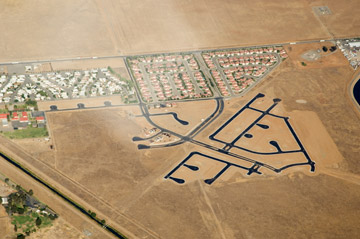 I watch the coastal stratus coming in from the west towards the airport and reflect that I'd be in a hell of a hurry to eat and leave if I were VFR. But I'm not, and by the time I pick up my clearance from Tower ("Cleared to Van Nuys airport via the CREPE3 departure, Morro Bay transition, San Marcus VOR, V386, OHIGH, Fernando Five arrival…") the clouds are overhead, and VFR would not be strictly legal (you could depart "VFR" east if tower looked the other way, I suspect). As with the last time I departed here for LA, I wonder how long that clearance will last, especially since it seems to be taking me straight into the firefighting TFRs inland from Santa Barbara. Sure enough, immediately I switch to departure (in a few moments of actual IMC before breaking out), Santa Barbara approach calls me and says "75T, bad news, got a new clearance for you, advise ready to copy…". The new clearance is basically just vectors to San Marcus (RZS) around the TFRs, then as before — so nothing too difficult.

In the distance towards Santa Barbara I can see what looks like an unforecast thunderhead above the pervasive smoke layer in front of me, but with a shock of recognition I realise it's an enormous billowing smoke cloud reaching way up into the flight levels and spreading horizontally like an anvil. The smoke will be the dominant visual element all the way to around Simi Valley — there's a large fire down there out of control, and the TFRs extend up to 15,000' 24 hours a day for firefighting aircraft. I can see Santa Barbara and the Channel Islands and most of the coast line fairly clearly, but almost everything inland for what looks like 50 or more miles is buried under the smoke layer. The layer reaches to about 7,000' by my estimation, and it's making for a beautiful sunset, I have to say, all reds, yellows, purples and pinks. Just Another Boring Southern California Sunset, I guess.

About this time approach reports that they've lost my transponder return, but they sound unconcerned (he says it's probably just terrain or antenna geometry, and he's got me on the primary anyway), and for a short while I get to do IFR the old school way, reporting a couple of waypoints and estimating waypoint ETA. The GPS units sure help with this, and I can't help reporting my next waypoint ETA with the spurious accuracy the 430's giving me, down to the last second. I'm sure that impressed the controller… in any case, after about 15 minutes the transponder return magically re-appears and I proceed as planned towards OHIGH for the Fernando Five arrival…
Posted by Hamish at 7/17/2007 10:00:00 PM
Email ThisBlogThis!Share to TwitterShare to FacebookShare to Pinterest