The Duchess Of Oakland 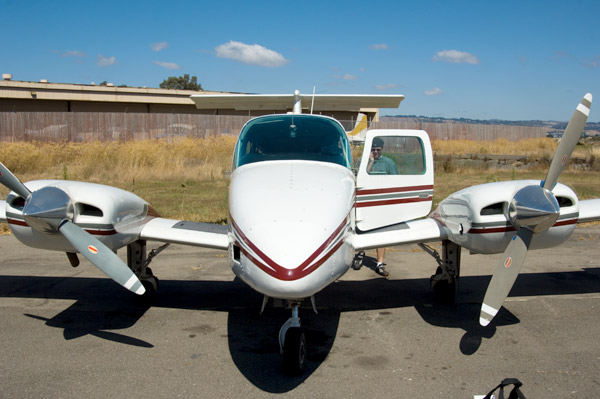 John calls me early this afternoon and asks whether I want to come along while he continues the left engine break-in on the Oakland Flyers Duchess. Well duh! I drop the work I'm supposed to be doing on a website for a friend (one of the Artists — sorry, Scott) and rush to Oakland's (KOAK) Old T's, where John's preflighting Duchess 15Q (above) in the tundra in front of Oakland Aircraft Maintenance (the shop that's helping with the break-in). 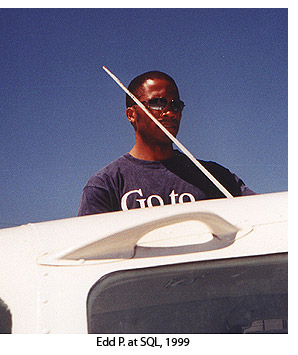 I've actually flown in Duchesses before, most memorably during my initial PP-ASEL training, with Edd ("short for 'Eddy'") P., a colleague of mine at the time who let me "fly" large parts of a relaxing flight along the coast and Peninsula, San Carlos (KSQL) to Salinas (KSNS) and back again while he maintained currency. I couldn't log that flight, of course, but I did learn the basics of how to keep the Duchess stable, upright, and on course, all at the right altitudes (there's a punchline in there somewhere).

This time the agenda is for a quick VFR flight down to King City (KKIC) and back, with some strict limitations due to the engine break-in: keep below 4,000'; keep both engines 24"/2500 RPM or lower except on take-off; throttle back to 18"/2300 RPM periodically for a few minutes; and don't lean the left engine (the refurbed one) at all. Nothing too onerous (I probably missed a few), but given the history with this particular rebuild (don't ask), it's crucial that we get this right. Sounds good to me, and I load my everything-plus-the-kitchen-sink flight bag into the plane and get into the right seat (John will fly left seat for this one, not his usual seat at all, of course). About the only potential fly in the ointment is the fact that NorCal's Oakland radar head is out for repairs (or whatever), and Oakland's normal Class C services are NOTAM'd inop today, meaning things like flight following and instrument approaches are iffy at best. In the end, this isn't a factor at all, but combined with unusual local parachute jumping NOTAMS and the aerobatics typically done out of King City (think "Sean Tucker", for whom Ben, my old (young) aerobatics instructor now flies…), it'll pay to keep our eyes especially well-peeled (or some such metaphor). 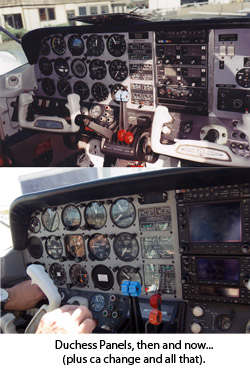 The plane looks and feels well-maintained and looked-after, and from the right seat the cockpit looks familiar, similar to the Duchess I flew all those years ago, except for the nice Garmin 530 / 430 panel on the right. Unlike the first time, this time pretty much everything on the panel and all the controls, etc., are familiar and make sense to me, and I feel well at home.

So after a careful startup we taxi towards 27R, and I program the 530 (VPCBT, KRHV, SNS, KKIC) while John does a careful runup. And then we're on our way…. Apart from a lot of bumps between Oakland and San Jose in both directions, the flight's uneventful, and I end up flying from the right seat enough to log a couple of hours dual, including a bunch of fun steep turns somewhere between Salinas and King City. This is a nice plane to fly, but as John notes, there's quite a difference between the roll and pitch sensitivities: you could roll this plane 30 degrees easily with a flick of the wrist, but in the pitch axis it's really quite a lot less responsive. Even so, the pitch trim (manual and electric) seems overly twitchy. But the ailerons feel a lot more natural than the Cirrus's, which may just be a reflection of that particular Cirrus (or it may reflect the spring-loaded system in the Cirrus that I'm really not sure I like all that much). A prominent missing feature that it'd be nice to have in this plane is an autopilot: I've become somewhat convinced that for single pilot IFR flying in serious sustained IMC, a good basic autopilot is essential (it doesn't have to be able to do much more than keep a heading or even just keep the wings level, if you ask me). Other than that, this plane is an instant hit with me — the steep turns are easy (I lose altitude and steepen the turn a little too much a couple of times mostly because being in the right seat I concentrate more on the horizon and flying by the seat of my pants than on the instruments I can't quite see over on the other side of the panel. "Welcome to my world…" as John says), the Garmins make casual IFR flying a lot more pleasant, the forward view from the cockpit is easily the best I've seen in a low-wing plane, and it basically just felt like a straightforward and safe aircraft.

We turn back a little before King City (we don't need to land, just do about two hours' tach time in the air), and shoot the ILS 27R back into Oakland, with John flying (no cone of stupidity for this, as I can't act as safety pilot on a twin).

Back on the ground at Oakland we do a magneto test again before refueling, and the results aren't promising — although the engines have been smooth and well-behaved in the air, back on the ground the left engine's running rough during the runup on single mags, and since we can't do the standard lean-it-and-rev-like-hell plug clearing on the new engine, it'll have to go back to Oakland Aircraft Maintenance for plug-pulling or worse.

I help refuel (to 40 gallons each side) and get a lesson in why, although this plane rents for "only" (ha!) about $120 per hour dry, it's never going to be my choice for pleasantly pottering about the Bay or Valley: we end up putting in about $200 worth of fuel, and that was nowhere near topping the plane off. In this case, at least, Oakland Flyers will reimburse John the expense (we hope), but it's still a shocker. And yet, and yet… learning to fly this thing and getting a multi rating would be a really enjoyable experience, and probably not too hard. But keeping current, especially to club rules, would be prohibitively expensive, and I'd probably want to get the multi add-on for IFR, and then there's the increased renter's insurance… and all this is yet another slippery financial slope I could really do without. We shall see.

Back in front of Oakland Aircraft Maintenance, Eric and his crew wander out and look the plane over. Apart from the rough-sounding left, there's a slight oil leak on the right cowl from the prop, and John and Eric agree it should be looked into. Eric's pessimistic about the left engine — he thinks it's probably one of the magnetos rather than the plugs, and he'll work on it on Monday. The good news is that the left engine barely used any oil during the two hours of use, and the actual break-in appears to be relatively successful. With (maybe) a new mag (or just a plug cleaning) and (probably) a new seal for the right prop, the Duchess should be in good condition to return online sometime next week. 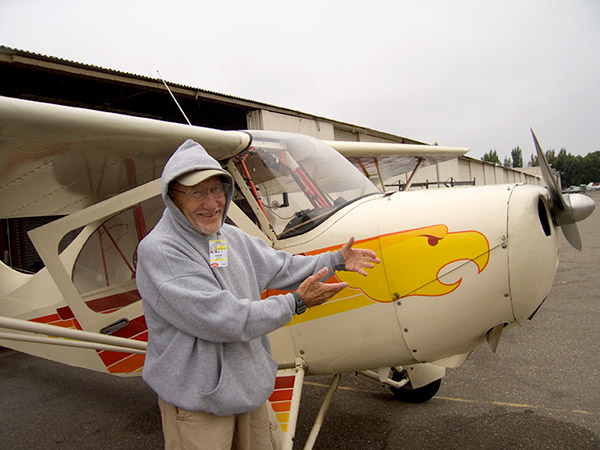 Earlier, as I'm walking across the ramp at the Old T's, I see Lou Fields's Thunderchicken in front of a hangar, and wander over to see if Lou himself is there as well. I haven't seen Lou for a while now, but he's still the same — he seems happy to see me; I'm definitely happy to see him, and we talk a while about the Thunderchicken (Lou's jokey name for his '46 Aeronca Champ, above, with Lou in front) and Oakland gossip. The champ's got radio problems, apparently; I say I'm surprised it's got any radios at all, but as it's based in Oakland, I guess it has to. He has a portable GPS in the cockpit — he wouldn't fly the thing without it, as he's said several times, but there's a panel-mounted radio in there too, somewhere.

It's always pleasant talking with Lou — as I've written elsewhere, over the years he's watched me get my private license, then let me rent his Arrow to get my complex endorsement (and later just to fly around for fun), he had some usefully-pithy advice when I was having trouble learning to do good wheel landings in the taildragger, he had similar things to say about my aerobatics training (until a few years ago he still taught aerobatics, and he got on well with Ben, my then-aerobatics instructor), and, until some health problems cropped up, he was slated to be my DE for the instrument rating a couple of years ago. He's been a constant background presence in my life at Oakland's Old T's, and I've always been grateful for his help and his sense of humour. Lou flew off carriers in the Pacific during WW2 and for many years after that, including Korea, and is something of an institution around here.

Posted by Hamish at 9/15/2007 08:20:00 PM
Email ThisBlogThis!Share to TwitterShare to FacebookShare to Pinterest

Lou is SOMETHING of an institution? What, pray tell, do you have to do be become a ful-fledged Institution?

People keep telling me British understatement doesn't work in the US, but I don't see it… :-)

I hope Lou is doing OK, he is definitely THE man, an old, bold pilot, he signed me the full workout on my SEL, MEL, IFR ratings way back...

I flew with Lou back in 1991 and he taught me aerobatics. What a great man. A gentleman I will never forget. And what a great instructor!