How Many Pilots Does It Take To… 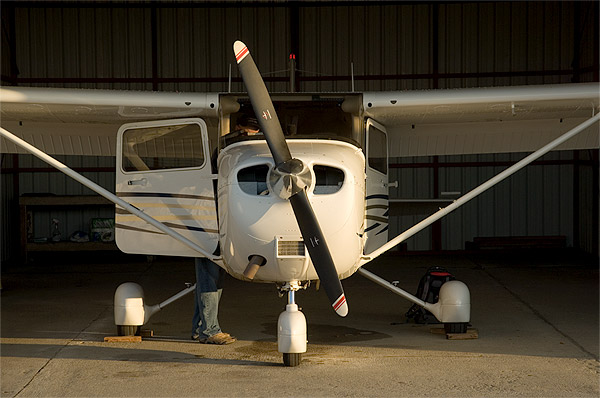 Cessna 051 Being Pre-Flighted In The Hangar

I feel like a complete idiot. I'm standing in the fading light and early Autumn cold outside Oakland Flyers, trying to get the external lockbox open so I can retrieve the paperwork for my evening flight in Cessna 051, the G1000 / WAAS equipped 172 I've booked for a short VFR trip to Livermore (KLVK) and back. I know the combination for the lock. I've opened it before. But nothing I do will get the bloody thing open, and I can't fly until I get the paperwork out (it's one of those shocking and little-known insider secrets that planes don't fly without the correct paperwork).

In desperation I call John to see if someone's changed the combo or something. John turns out to be on the way to this very spot for a flight with Evan H., one of his students, in another of the club's 172s, so I wait a few minutes until he turns up. He can't get it open either; neither of us can no matter what song and dance or imprecations we make. Evan turns up a few moments later, and the combination of the three of us trying subtle and not-so-subtle variations on the usual theme doesn't work either. Just as someone makes the inevitable joke, Evan manages to get the bloody thing open (with exactly the same combo and sequence of twists and turns we've all been using for the past fifteen minutes). And of course, inside the lockbox is… nothing. The powers that be at Oakland Flyers have forgotten to leave 051's paperwork out for me.

Luckily, John's got a key to the (locked up, gone-home-for-the-day) office, and we eventually find the folder and paperwork inside. While doing this I ask what the others were planning — an IFR practice flight to Mather (KMHR) and back, apparently, as part of Evan's training to get his IFR rating. They're taking one of the crappy old non-GPS non-glass 172s, the only thing they could get on the day. I suggest we could swap planes, since I'm really only flying for VFR landing and circuit practice today, but it turns out I'm not technically checked out in the other plane (it has a few quirks to do with the fuel system that require a separate but minor checkout). So I suggest I'd be happy to share 051 and back seat for at least half the trip, as long as I get some flying and an approach and landing in, and the costs are shared appropriately.

And so that's what happens…. 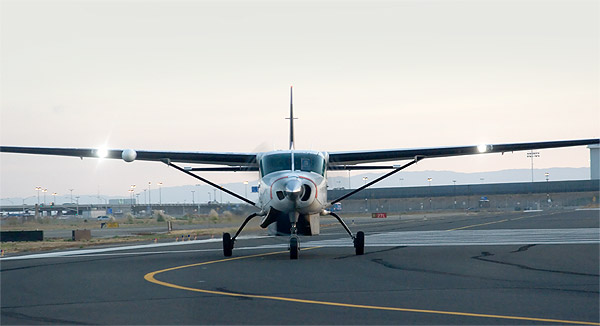 FedEx caravan Bearing Down on 051 Next to 27R, KOAK

IFR training's a lot easier when done from the back seat. I watch and listen as John and Evan go through the paces, a simulated SALAD 1 departure from Oakland and a simulated clearance along a plausible route to Mather, interrupted by an ad hoc hold John threw at Evan somewhere out towards OAKEY intersection. Evan handles it all pretty well, and the (night, VFR) practice approaches into Sacramento Executive (KSAC) and Livermore (KLVK) are basically smooth and well-flown. I kinda enjoy passively following along and monitoring things, and predicting or guessing what John's about to say in response to Evan's actions or some interesting indication on the panel. Evan's basic IFR skills seem to be very sound, but he's not so familiar with the glass panel or the autopilot, and there are some typically head-exploding moments over the Delta. But he copes better than I did at the same stage in my training….

We do a full stop in the dark at Livermore to refuel the plane (it's a good 80 cents a gallon cheaper here than in Oakland, where it's above $5 a gallon now), and to let me take the left seat for the quick flight over the hills back into Oakland. I plan on a VFR departure under the cone of stupidity and a quick stab at the RNAV (GPS) 27L approach with LPV minimums, if ATC and the G1000 will cooperate. The ATIS for Oakland mentions a broken layer at 1,100 feet (the usual Bay Area summer evening coastal stratus), so we'll need a popup clearance in any case, and I'd like to get more familiar with the G1000 LPV setup. The whole thing shouldn't take more than twenty-five minutes, max. What could go wrong?

Not much, really, in the sense of any sort of emergency or incident, but we hadn't planned on the absolute mess that was NorCal Approach's 125.35 sector that evening, with all sort of overheard botched radio calls, vectors for spacing, misunderstood instructions, etc. (none of it by us, of course :-)). Not knowing what's coming, we depart into the night and I go under the hood, and John plays ATC and vectors me until we're high enough for radar contact and to not have to climb for the approach. We call NorCal, and after a couple of attempts get through with our request for the approach and clearance. The controller sounds irritated and overloaded, and estimates at least a ten minute delay before he can slot me in. In the meantime, he wants us to maintain VFR and loiter roughly where we are until he can fit us in (not quite his words, but more-or-less his intent).

John vectors me a bit more, then throws me an ad hoc hold that throws me: as transcribed from my kneepad, "hold northeast of a point 4 miles from JUPAP waypoint on the 025 bearing, left turns, 3,700 feet…". Now it's my turn to have the head-exploding moment, and I scramble to visualise what the hell it all means (if I remember correctly I had the presence of mind to ask "nautical or statute miles?!" at some point as a diversionary time-waster). Just as I work out what he's asking me to do (as we're rapidly approaching the holding fix, something I only woke up to at the very last second), NorCal barks a vector at me for joining the ILS. I try to query this, but the controller's got other things on his mind, and so I follow the vector, hoping he heard my request for clarification on the RNAV vs. ILS 27R thing. In the meantime we can hear a bunch of misunderstandings and missed calls on-frequency, and things start mentally heating up. We're definitely not the only traffic being held in the area, and it sounds like there's a whole series of spacing, ummm, "issues" being worked out with varying degrees of patience by controller and pilots. Not an ideal flying situation, but this sort of thing is great real-world practice, and a good occasion for snarky remarks from John, Evan, and myself. And I can't help noticing that there seems to be more than the normal helping of British accents out here tonight, earlier as well as now. It's not just me with the funny accent….

Eventually the controller gets back to me and gives me a quick vector to JUPAP (the RNAV approach IF) without mentioning the approach. We lumber towards JUPAP with me wondering what's next. Should I turn at JUPAP for the approach? What's on the controller's mind here? The frequency is a continuous traffic jam of requests and commands, and I'm just not going to be able to ask. I decide to turn, as, as John says, it's going to keep me out of the ILS for Oakland's runway 29 a bit further across from us, which has to be a plus from ATC's point of view. Just before JUPAP I unexpectedly get instructed to do a 360 for spacing. Just one, I wonder? As we complete the first I manage to ask whether he wants more and he just basically grunts "051 keep circling". I feel a little exposed, sitting there at 3,700' right off the main ILS and RNAV approach centrelines, but there's not a lot we can do: we can't go VFR because of the stratus, and at least we're in the system.

After a couple of orbits we're hurriedly vectored for, and cleared for, the RNAV approach. Immediately I join the approach the controller asks me for best possible forward speed (he's sandwiched us between a couple of jets, as he reminds us several times), and asks what speed we can do. The "120 knots" I give him isn't really enough, as he'll keep implying over the next few minutes, but hell, it's all we can safely do, really, and it's all I'll give him. The actual approach flying bits go fine (this is a very straightforward approach), but there's no vertical glideslope coupling yet with the G1000 and the autopilot; however, since the LPV glideslope's pretty easy to get right by dialing in a suitable vertical speed on the AP, the rest of it's easy. I'm told the G1000 / AP combination will properly couple "in the next release". Yeah, I've heard that before.

After being switched to Oakland tower I'm immediately cleared for landing … on the wrong runway (it must be catching). But the controller's good-humoured and rather laid-back, and after clearing this up I hand-fly the last part of the approach under the hood to about 150', with John watching like a hawk. It's always nice to be able to hand-fly an approach to below the minimums without any major deviations…. Nearly forty minutes after departing Livermore we're back on the ground at Oakland; Livermore airport is roughly eighteen nautical miles from Oakland airport.

Back at Oakland Flyers I file my paperwork and discuss the flight with John and Evan. A lot of fun, really. I should do this sort of thing more….
* * *
I know I've said this before, but 051 is the only airplane I've ever rented that's actually kept in a hangar. The climate around here is benign enough that outdoor tie-downs are just fine for most small planes, and the cost of a rented hangar here is high (and, more importantly, the waiting list for one is years, if not decades, long). The hangar itself is a pretty standard Port-A-Port thing, but the whole opening and closing the door thing is quite a process, and always reminds me of an old drawbridge / portcullis in Heath Robinsonesque (Rube Goldbergesque) style, with a lot of clanking and bits of wood and iron that don't seem to fit together quite right (when I was a kid in Britain I remember something like this in real life in Cornwall or Devon somewhere, I think). No matter what I do, I end up injuring one of my fingers or jamming the door or getting something wrong each time I use the thing; this time, not only do I manage to get grease all over my hands while cranking the door closed in the darkness after the flight, but I ding my thumb with the latch release mechanism. Hmmm. There's got to be a better way… (but it's nice that there's a hangar for this plane). 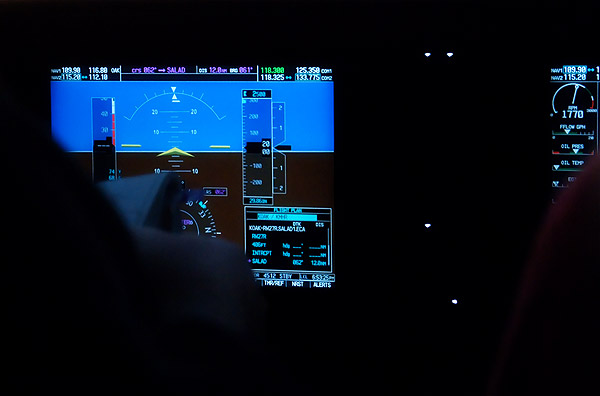 Posted by Hamish at 9/27/2007 10:33:00 PM
Email ThisBlogThis!Share to TwitterShare to FacebookShare to Pinterest

It's usually zero sum on a flight like this, but if you plan it right, it can probably save a little. My main motivation is really to have a safety pilot along for IFR practice….

Heh...Port-a-port hangars. Yeh, they're a ton of fun (we have the Arrow in one). A friend calls it the origami style T-hangar.

Nice writeup on the approach. Sounds like it was a nice learning opportunity.

Sounds like a great trip. I did the first 10-15 hours of my IR training with another pilot. Not really as an exercise in saving money but more to share tips and learn from other people's mistakes. Also to have some congenial lunches together. It's a nice way to train if you get the right people.