Flying To A T… 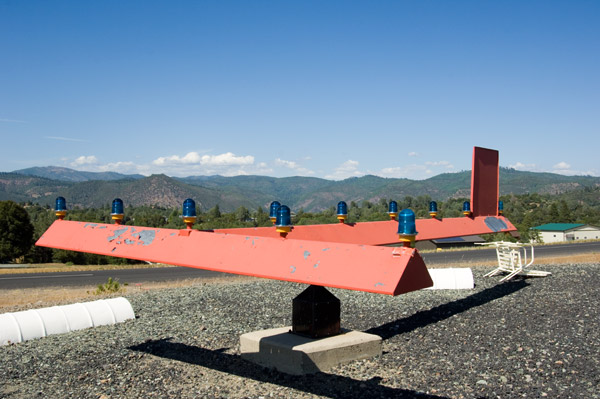 The approach starts going a little awry just as it always does returning to Oakland at rush hour: after having successfully requested the practice ILS 27R back into Oakland (KOAK) from way out over the Central Valley with NorCal approach, with me under the Cone Of Stupidity and E. in the right seat as safety pilot, the closer we get to Oakland the more irritated and stressed the controllers sound, the more overloaded the frequencies are. Approaching GROVE intersection on the localiser at best forward speed and on vectors for the localiser, and several thousand feet above that leg's minimum altitude, a new voice on NorCal's frequency suddenly barks out "83Y! Right 360 for traffic; break; XYZ! heading 180, vectors for traffic, traffic is a Cessna at 2 o'clock, 5,000; break; ... ", and for hardly the first time I get to do a loping 360 right next to the extended ILS while under the hood, without a clue what's about to happen next. I can hear a series of re-adjustments going on for traffic on the ILS, and start wondering whether I'm about to be sent back out past SUNOL (the initial fix for the approach) for twenty minutes holding while NorCal sorts out what sounds like a few close calls with spacing.

As with the last time (that I can remember, at least), although I was implicitly asked to do only one orbit, I'm not sure whether to rejoin the vector onto the localiser or keep doing a 360. E. can see conflicting traffic barreling down the localiser about a mile away slightly below us; the frequency is absolutely jammed with traffic being vectored, cleared, acknowledged, and generally shepherded, and I haven't a hope in hell of getting through to the controller before the 360's complete. So I head back towards the localiser after the 360, after making damn sure E. can't see any conflicting traffic (I also take off the hood for a short time to do my own checking), and a few seconds later, just as I'm about to turn onto the localiser, I get cleared for the approach. Someone else (a Citation, if I remember correctly), is cleared for the same approach a few seconds later behind me. Too bad I'm nearly two thousand feet too high for the leg I joined, and that that leg ends in a mile or two with the glideslope intersection point coming up way too quickly….

Ah, home! I've grown to love this sort of thing. It's a challenge. And it's a nice VMC day, so I disengage the autopilot and decide to try to hand fly the plane the rest of the way, or at least until I can get the plane below the glideslope so the autopilot can couple properly (it won't couple to the glideslope from above). That's a shame, though, since part of the whole point of this approach for me was about keeping current with keeping on top of the G1000 and autopilot. Oh well — maybe next time. I get handed off very early to Oakland tower, and maintain best forward speed and a huge sink rate while trying to avoid ripping the wings off or exceeding any recommended airspeeds. In the ensuing rush I deliberately delay checking in with tower while I set the plane and instruments up a little more to my liking. Tower calls me after a short time sounding concerned — I hadn't checked out of NorCal's frequency and hadn't checked in to tower. Well, I had checked out from NorCal, but the frequency was so busy I was probably stepped on. Tower sounds a little short with me, but it's me that's flying, not him, and his frequency is a lot less crowded than NorCal's, so I just apologise and tell him we're fine. We get cleared to land number three a long way out from the runway.

I really never make it down to the glideslope until only about a mile out from the threshold, and have to hand-fly the plane the entire way to the ground. Good practice at real world IFR flying, of course, but if it had been IMC, I'd probably have gone missed a short time after joining the localiser: I really don't like the idea of plummeting like a rock in IMC with the terrain and traffic around Oakland. In any case I look up at about 400' (I'm worried about the traffic around us in the pattern); we're more-or-less right on the centreline and at the right altitude, if a little fast, and the landing's fine. We exit 27R at golf and breath again.
* * * 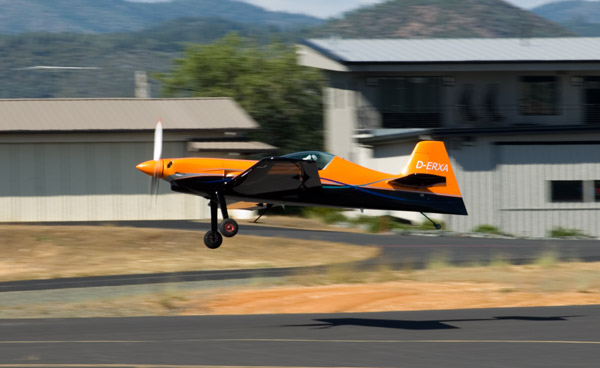 After having whined about barely flying in the past few months, I get to make a second flight in several days. Woohoo! This time it's another flight with E., one of John's students, and this time there's really no set agenda or purpose.

Since E.'s still working on the last stages of her instrument rating, I mentally plan a few alternatives: an IFR training flight to somewhere like Stockton or Sacramento with E. flying a bunch of approaches under the hood, a quick seat swap and me flying back and doing an approach into Oakland; or maybe a longer IFR flight to somewhere scenic like Monterey or Ukiah, with E. flying the outbound leg and approach under the hood, and me returning. Or something else — I don't know. The weather's clear Northern California VMC almost anywhere we're likely to fly, so that (for once) won't be a factor; even the evening stratus isn't forecast to return until around midnight. In any case I do a bunch of work with DUATS and such and am prepared for almost anything (except a trip to LA or Reno or Vegas :-)). We have 83Y, one of the club's G1000-equipped Cessna 172's, out for the afternoon.

So when E. gets to the hangar after I've preflighted 83Y (I got there early), my mind's fairly blank, and I let her chose what we'll do. The result turns out to be one of the more enjoyable flights I've done for a while: a nice VFR cross country to Pine Mountain Lake (Groveland, E45) and back, with my under-the-hood approach the only even vaguely IFR bit. E. flies out; I fly back, which suits me just fine: Pine Mountain Lake airport's a fun fly-in location with a slightly-challenging location, pattern, and runway, and it's nice to watch someone else discover the joys of heading out over the Tuolumne river canyon and back in the pattern towards the little scar on the ridge that's the runway….

At the airport itself we get out and wander around for a while. I particularly want to visit the wind T that's sitting up on the little hill next to the runway, a particularly nice spot for a picnic or planespotting. I'm also motivated by Aviatrix's posting from a while ago about the rarity of wind T's (amongst other things) — that post had reminded me of the airport and made me want to see it again sometime — and it turns out that E.'s never seen one before, from the air or up close like this. So we clamber around in the warm sunshine for a while exploring the place, and also meeting some locals, who seem uniformly friendly and approachable. Pine Mountain Lake's like that — small and friendly, and the airport's an integral part of the town (it's also one of those airports where houses with hangars are next to the runway). They're having an air show on 21 June; pity I can't attend. We get to see a couple of aerobatic Extra EZ's taxiing and taking off in formation (one of them German-registered); apparently the pilot in the orange Extra is someone famous in the aerobatics world, but I missed who it was. There was some excitement as what looked like a powered glider approached, engine off, and landed; this turned out to be the first Pipistrel Sinus (what a name — its sibling is the Virus) I — and everyone else standing around — had ever seen. An interesting looking plane, very much a long thin rather bendy glider wing attached to a light sports body, and very quiet even with the engine on. Quite a contrast to the Extras…. 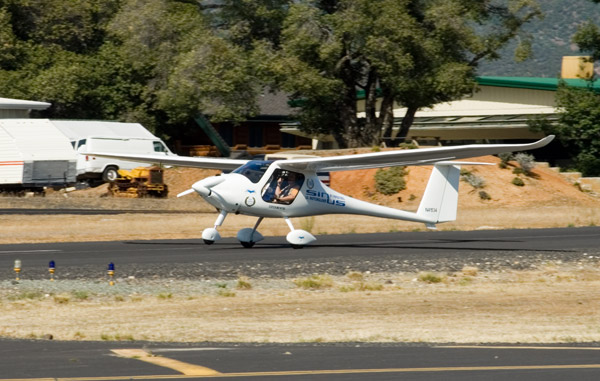 Posted by Hamish at 6/04/2008 08:52:00 AM
Email ThisBlogThis!Share to TwitterShare to FacebookShare to Pinterest

Actually, the orange Extra isn't an Extra at all. It's an Xtreme 3000, a new aerobatic design from Germany. The one you saw is one of only two in existence, and the only one here in the U.S.

I saw that aircraft on the ramp at an aerobatic competition at Paso Robles last weekend. The plane and pilot were not competing, but had stopped in to say hello. I'd heard that Wayne Handley was flying the Xtreme 3000 a bit, so perhaps that's the famous person you were referring to.

I can't say anything about its flying characteristics, but without a doubt it's the sleekest looking aerobatic monoplane I've ever come across. I think it may unfortunately suffer from the same problem Extra Flugzeugbau is having, namely that dollar is so weak against the Euro that Extra 300s and Xtreme 3000s are 50% more expensive for Americans to buy than they were just a couple of years ago.

Aviat will benefit because a Pitts is way cheaper for a European to buy, but Extra will be hurting because most of their market for aircraft is here in the U.S.

Ron — thanks for the comment. I guess I should have done a bit more Googling around before calling it an Extra: you're absolutely right, it's the Xtreme, and it's quite a plane (the other aerobatic plane in formation with it looked more like an Extra). Yes, the name "Wayne Handley" rings a bell, but I can't be sure — we got distracted by the arrival of the Pipistrel motor glider at around that point (quite a contrast to the Xtreme).

And that's an interesting point about the economics; I just wish I could afford any sort of plane, let alone an Xtreme. I think I'd even settle for a Husky right now :-).