People sometimes describe themselves as being "on autopilot" when they mean they're figuratively sleepwalking through a situation, but after crossing Roanoke VOR (ROA) inbound for EXUNE, the initial approach fix (IAF) for Roanoke's LDA RWY 6 approach on autopilot, I can't help thinking that's a really silly usage. Whenever I fly a coupled approach with an autopilot in IMC I spend my entire time probably more awake than if I were flying the approach by hand: as John once remarked sometime during my instrument training, you really have to treat autopilots like wayward students and keep a paranoid eye on them every second of the approach. Otherwise you might sleepwalk your way into the ground. So I'm not sleepwalking, I'm concentrating intensely on the G1000 screens in front of me, with a workload that's greatly increased by my using the unfamiliar Garmin GFC700 integrated autopilot coupled to the G1000. I've really never seen this combination before, and learning on the fly probably isn't the smartest way to cope. Never mind; damn the torpedoes, I guess. I can always fly by hand if things get too complex, and I have a strictly minimalist need-to-know approach to the G1000 and associated autopilots when I fly single-pilot IFR anyway. In any case, as always with this unit, I'm curious to see how it flies the course reversal (this part — along with automated holds — always seems a miracle to me).

Of course the G1000 / GFC700 works flawlessly around the hold, and I head back to EXUNE and then RAMKE for glideslope capture. Somewhere before RAMKE as the G1000 switches to localizer mode and I'm looking for the glideslope to couple, I sense that something's wrong: I've been dead on track for the localizer according to the GPS version of the approach, but the switch to the localizer comes with a sharp deflection indicated on the CDI and a smooth right turn by the autopilot to compensate. OK, I think, maybe there's a mild alignment issue here and it'll sort itself out; in the meantime, the glideslope comes alive properly and couples. A few seconds later I'm still well to the left of course according to the G1000's CDI, but the magenta GPS course overlay is now receding to my left. Something's horribly wrong, and I know it. I don't know what's wrong, but I blurt out that the localizer seems to be broken and I'll go missed.

Well, I'd go missed in real life, anyway; in this case, John clicks the mouse and suspends the sim. We're both puzzled by what just happened: the sim seems to think the localizer's way out to the right, while the GPS has it basically correct when cross-checked with the other fixes. After a quick discussion we think it's probably because the sim doesn't understand LDA's and thinks the localizer is aligned with the runway, which, being an LDA, it isn't (never mind that this LDA has a glideslope too, which is pretty special). We abandon the attempt and set up for the Bishop KBIH RNAV (GPS) Y RWY 12 approach, starting somewhere before the RBRTS initial approach fix.

A useful lesson, if unintended: cross-check, cross-check, cross-check. Unlike with the Air New Zealand case highlighted on John's blog, the GPS makes my job easier: a graphic display of inconsistency that's much easier to interpret than the basic DME / OBS / ILS gear in the Air NZ plane; and much as I hate to admit it, I probably trust GPS (in something like the G1000 implementation, anyway) nowadays at least as much as I trust a localizer. Trust, but verify.
* * *
A few weeks ago John had mentioned that California Airways had a new FAA-certified G1000 C172 sim available for rent; it's loggable, it's cheaper than flying the Real Thing, and since I'm a member of CalAir (although not particularly active since the long(ish) freeway drive to Hayward (KHWD) is a real pain compared to the local jaunt to Oakland (KOAK)), I leap at the chance. The sim's in one of the rooms at CalAir's new premises across from the Hayward Toys-R-Us on the eastern end of the airport, and it turns out to be a full physical panel full physical controls thing with a large HDTV screen in front of it for terrain, all coupled to X-Plane and full G1000 emulation. Not bad, and, as far as the panel and instrument operation go, very realistic (even down to the operation of the wet compass and the annoying lack of approach plate clip on the yoke). Everything seems pretty familiar about it except the new autopilot buttons and the flight director software that comes with it for the G1000. The control behaviour isn't particularly realistic for a C172, but it's definitely better than with most sim controls I've experienced. The seat is realistically Cessna-GA-ish in being quite inscrutable and clumsily difficult to set up for this pilot's absolutely average physique — top marks for realism there.

The basic plan is to do a handful of varied approaches to get used to the GFC700 autopilot and to keep current on the G1000. I'm supposed to study up for the GFC700 beforehand, but I blow it and turn up with only a vague idea of how it's different from (or the same as) the autopilots I already use. Flying blind, I guess. John gives me a quick rundown on how it all works, and we start with a couple of easy approaches: the Oakland KOAK ILS RWY 27R and the KOAK RNAV RWY 27L (LPV minima) approaches. I can do both of these in my sleep, but the autopilot and flight director are novel, so I hand-fly the ILS (with a missed to REBAS, which is unrealistic in real life) and fully couple for the RNAV. No real problems here — but no sleepwalk, either — but as with any sim, it's harder to fly than a real plane, and difficult to land accurately (my sim approaches tend to end with a victory roll at decision height over the runway because that's actually easier for me to pull off as a lapsed aerobatics type than landing the damn sim nicely).

We move on to Aspen (KASE) for the LOC/DME-E approach, mostly because it's justly famous as a difficult and occasionally lethal mountain approach with a backcourse established solely for the missed, and a long visual segment that's a source of trouble. Plus, of course, I've always wanted to fly this in real life; I can't ever afford that, so a certified sim will have to do. In any event, the approach goes fairly smoothly except for the final segment where I have trouble lining up to land (again, I'm going to blame the sim's unreal control feel for this…) and we have to reset things so I can do the missed smoothly. The backcourse is easy to intercept by hand, and after a short run along it, we stop the sim and set up for the next approach, the Roanoke (KROA) LDA RWY 6. Which is where things go wrong…

By now I've sort of got the G1000 / GFC700 combination under control, but as John notes, I'm having trouble estimating the sink rate needed to get down to appropriate segment altitudes or for the ILS glideslope capture, and I tend to be too gentle with the descents, meaning I miss the target altitudes or join them a little later than I should. This seems odd to me — in real life I don't have much trouble with this — so it may just be an artefact of the unfamiliar autopilot controls and coupling: in all my previous coupled flying with the G1000, the autopilot (usually the King KAP 140) has to be told what to do separately, and things seem simpler to keep on top of; here, I suspect, I'm still a little too unsure of how to command the autopilot to do what I need it to do, and I'm reluctant to force the plane down as fast as I should with the unfamiliar gear. It's all good practice, anyway, and the associated flight director on the G1000 is great for hand-flying the plane (as long as you're on top of setting it up, which is much the same as setting up the autopilot) — we don't have this setup on the G1000 C172's I fly, but maybe one day it'll all come in handy in Real Life. The flight director is to an HSI as the HSI is to one of the old HI's: magic!

The final approach is the RNAV approach into Bishop, my fave Owens Valley town (I've been visiting there at least annually for twenty years). The approach goes well with John emulating an imagined Bob Channel-like CTAF at Bishop; I actually land the sim this time in the teeth of typical Owens Valley wind without breaking anything, and without departing the runway in search of elk or tumbleweed or (this being Bishop) LADWP trucks.
* * *
So I get to log a handful of approaches and learn a lot about what can go wrong and what can go right with them and the associated equipment, and to do it all in the safety and comfort of CalAir's upstairs aerie (plus, of course, it's cheaper, by some way, than actually flying). I really like the G1000, and I think I really like the G1000 + GFC700 combo, but I probably need to do a little more reading of the associated literature before I do this in real life. In fact, I probably need to start reading the literature — flying the combo blind was a challenge, but my head didn't explode, and with a great deal of prodding from John, I didn't fly things too badly; I still feel good about recognizing early on that the LDA wasn't right at Roanoke, but that's the beauty of simulation: I'm sure in real life I'd have been a little slower on the uptake, but it's given me one more real-life(ish) item for the mental checklist.
Posted by Hamish at 12/19/2008 02:19:00 PM 2 comments
Email ThisBlogThis!Share to TwitterShare to FacebookShare to Pinterest 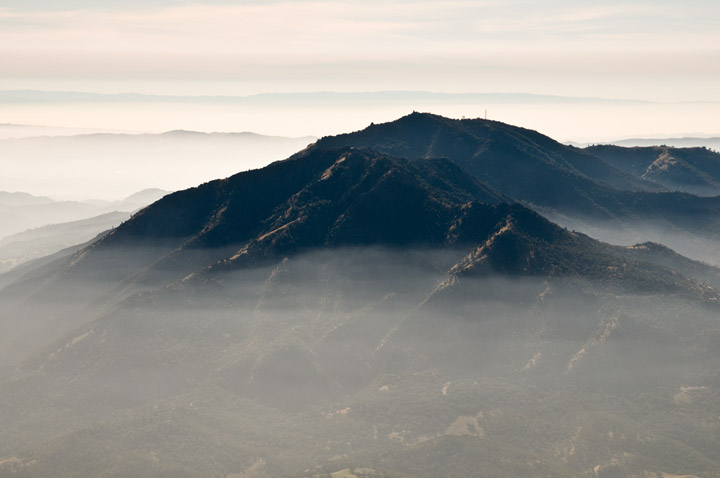 It's not so much that I haven't been flying, it's that I haven't been blogging (well, not here, at any rate). Too much work and not enough money or time to sustain the habit the way I'd like, unfortunately. But I did get to do an enjoyable IFR currency flight with Evan to Sacramento (KSAC) and Rio Vista (O88) and back a month or so ago, with me under the hood for a little under one and a half hours, and Evan for a little less. There was really quite a lot to blog about from that flight, including an occurrence of the sort of botched hand-off and ATC miscommunication we're seeing more of in NorCal as more trainees seem to be coming on line, and a truly classic GPS Moment on my part just past the initial approach fix on one of the KSAC approaches (I'm actually getting pretty good at doing the "damn the torpedoes" thing nowadays); but otherwise, all I have to show here are some pix taken during the flight (the top one's of Mt Diablo from the northeast; the other's of the wind farm to the south of Rio Vista in the Delta; click on an image to see a larger version). More next time, for sure… 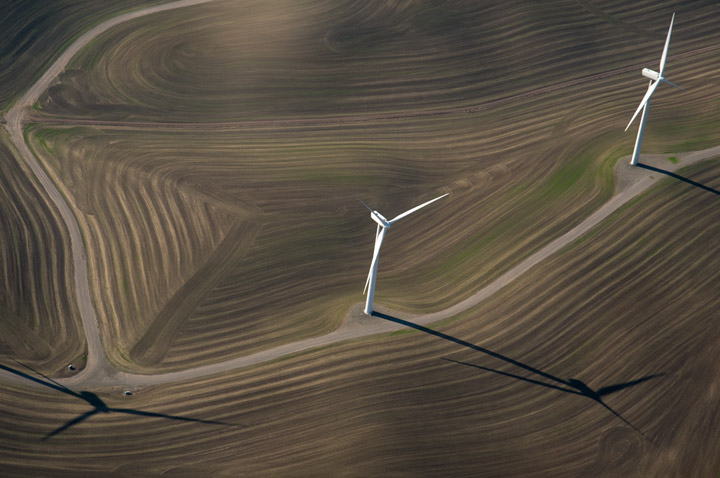