Lights On, Nobody Home

It's a perfect night for some VFR flying, and we're taking good advantage of it: the Bay's spread out 3,000' below us, San Francisco and Marin to our left, Berkeley and Richmond below us, Concord and Walnut Creek to the right, and Vallejo, Benecia and Napa in front of us. It's a calm night, and relatively warm for a winter's night (no scraping the ice off these planes, that's for sure…), it's a good break from preparing for my photo exhibition, and for me it's the end of the longest period without being in the left seat of an actual airplane as PIC in the decade since I got my license (I blame money and too many other damn things going on in my life at the moment). Part of the point of flying tonight is to get me back into VFR (and club) currency (I'm easily IFR current due to sim work), and to start the WINGS thing for BFR currency (I'll explain this in a later posting). We decide to head out VFR for Napa (KAPC) for general VFR practice and night landing work, something I'm looking forward to a lot, as I don't fly VFR much nowadays, and any night flight in clear weather over the Bay is just magic.

Somewhere over Richmond we can see Napa's rotating beacon in the distance, but not much else. No runway lighting, just the rather dark airport area surrounded by urban light that's in more-or-less the right place for Napa. We get the frequency change from NorCal Approach and pick up Napa's ATIS. It sounds a little odd for the still, clear, calm night, but I don't think much of it — nothing too odd, just windier on the surface than I'd have expected. It's claiming runway 24 is the main operating runway, which is plausible, but I'd have expected 18R given the time of day. Then John (sitting in the right seat as instructor this evening) notes what I'd missed: the ATIS is something like six hours old. None of the ATIS's around here are ever more than an hour old unless there's something wrong; I should have picked this up, but the weather's so benign and ATIS didn't have anything terribly interesting to say that I basically heard what I wanted to hear. Coupled with the total lack of runway lighting in what's supposed to be a towered airport with a tower open until well after we'll be finished our practice work there, things seem a little odd. I look up Napa again in my Blue Book, wondering whether they've changed tower hours. Nope. There were certainly no NOTAMs about early closing on DUATS or Forelfight when I'd checked just before startup. We switch to tower frequency — it's deathly quiet, which isn't all that unusual, I guess. John remarks that maybe they've had to leave early and forgotten to switch ATIS to the standard after-hours ASOS re-broadcast on ATIS frequencies (which usually contains a small announcement about the tower being closed until the morning).

In any case I try calling tower to see what happens. No response. I'm suspicious of the lack of runway lights — I can't help feeling I'm missing something, maybe we're heading for the wrong place — so John suggests I treat them as PCL's (pilot controlled lighting), and I dutifully click the lights on from maybe eight miles out on Napa's tower / CTAF frequency. Voila! The runways come into very clear view against the dark background. I still think it's odd that the tower's apparently out, but never mind, on with the show. I broadcast our position and intentions on tower frequency as though it were a CTAF, and continue inbound for runway 24. At maybe five miles out I try to contact Napa tower once again, mostly out of a sense of duty, and because it'll be the last chance before hitting Napa's class D airspace if indeed tower's actually open. Miraculously, this time there's a response. A very quiet, crackly response, and one that I couldn't read at all, but a response. I assume it's another aircraft on CTAF, and transmit accordingly. This time I can just pick out the response, and, mirabile dictu, it's Napa tower. Sounding like they're using a hand-held and just woke up, but never mind, it's still Napa tower. She instructs me to join a left pattern for 18R, clears me for touch and goes, and tells me to make a standard right closed pattern for further work. This all sounds more normal to me. She tells us the wind's calm. ATIS still says it's quite windy; ATIS is still hours out of date.

As we join the pattern for 18R, and still the only aircraft on frequency, John asks Tower about the ATIS and the lights. The controller doesn't comment on the PCL Thing, and claims that the ATIS isn't nearly six hours old, and that it'll be updated again in a few minutes. Hmmm, okay….

We do a bunch of practice landings, short approaches, etc., over the next twenty minutes or so, and the controller's generally on-the-ball and competent (Napa Tower usually has good controllers in it which is one reason I really enjoy doing practice work there), and except for the terrible quality of the radio she's using, we forget the earlier confusion until the bloody runway lights go off suddenly as I'm on short final. Dammit, I think, and quickly click the lights back on from the left seat as I cross the threshold. What's going on? I don't bother asking this time.

We decide to depart back to Oakland, and get routed straight out over the Bay, as usual. On the way out, a mile or two off the departure end of 18R, we monitor ATIS. It's now something like seven hours old, still claims runway 24 is in use, and still claims that it's really quite windy. And that it's early afternoon locally.

Hmmm, is all I'll say here.
* * *
Later, after a bit of fun airwork over San Pablo Bay, we head back to Oakland for some more landing practice — touch and goes, full stops, short approaches, etc. — on 27L. Nothing that I can't do without a bit of coaching from John, and overall a lot of fun; as I've said, it's a beautiful clear still night, and there are few things around here more visually interesting than a large airport at night.

So after an hour or two of flying, we put the plane back in the hangar and debrief. Just as I'm locking up, I somehow walk straight into the wing strut and nearly knock myself flat. Not unconscious, but painful, at least. I guess it's a sign of how little I've flown this plane lately that I just didn't think about the strut. Oh well; days later my head still hurts where it's bruised….
* * *
Earlier, as we're taxiing next to Oakland's 27R for runup and departure, we hear a Citation cleared for takeoff on 27R, and a few seconds after it roars past us we hear an on-air request from another pilot (in a Caravan) for the Citation's tail number. The controller gives it out with a crisp professional-sounding flourish. The back story here is that Oakland's North Field, especially runways 27, have stringent noise reduction policies due to the good burghers of Alameda settling just across the water under the departure ends of those runways, and that policy is pretty clear about not using 27R for turbine departures in these circumstances. ATC can't forbid these departures, even if they're pretty good at spelling out on-air the policy when someone asks for a "forbidden" departure, and it's basically up to the rest of us to try to bring pressure to bear so that anti-social departures don't end up closing the entire North Field. Departing 27R instead of the South Field's 29 is surely somewhat quicker if you're taxiing from Kaiser (the main FBO), but the costs to the rest of us (not to mention to Alameda…) make this a deeply unpopular act with some of us locals…. Not sure how this played out in the end, but I can't help noting that a rather well-known local who routinely did screamingly-loud departures off runway 33 straight out over San Leandro Bay and Alameda in a Citation came to a very sticky end on the other side of the country in that same Citation. Nothing to do with the departures themselves, of course, but the attitude may have had something to do with it.
Posted by Hamish at 1/29/2009 10:32:00 PM 6 comments
Email ThisBlogThis!Share to TwitterShare to FacebookShare to Pinterest

And Now For Something Completely Different… 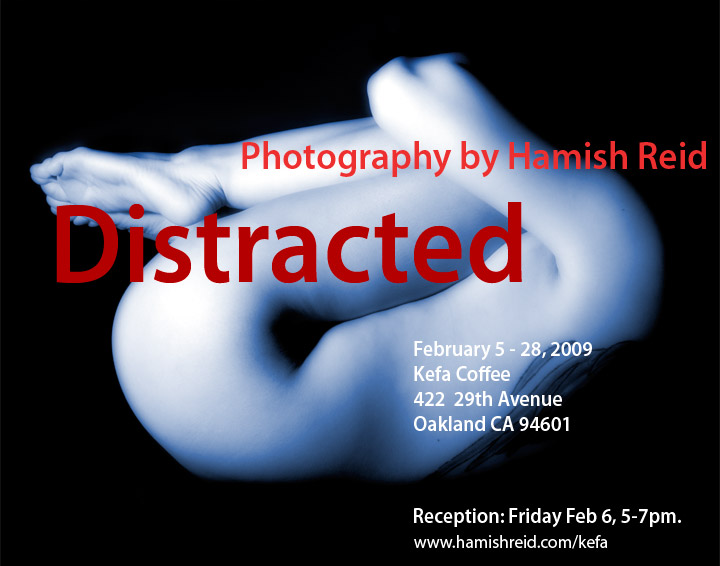 I haven't been flying much lately, in some ways because of this — a show I've got coming up next month that I've spent way too much time preparing for (if I see another mat I have to cut or frame I have to glaze I think I'll scream). If you're in the Bay Area on Friday Feb 6, you're invited to the informal opening reception 5-7pm at Kefa Coffee (a nice local coffee shop / cafe near my studio in East Oakland). Details here…. I'll probably be the only person there who doesn't look like an artist (well, I guess I don't look like a pilot, either, for that matter).

(I might actually escape to get to do some flying in the next few days; we shall see…)
Posted by Hamish at 1/25/2009 10:05:00 PM 2 comments
Email ThisBlogThis!Share to TwitterShare to FacebookShare to Pinterest
Newer Posts Older Posts Home
Subscribe to: Posts (Atom)