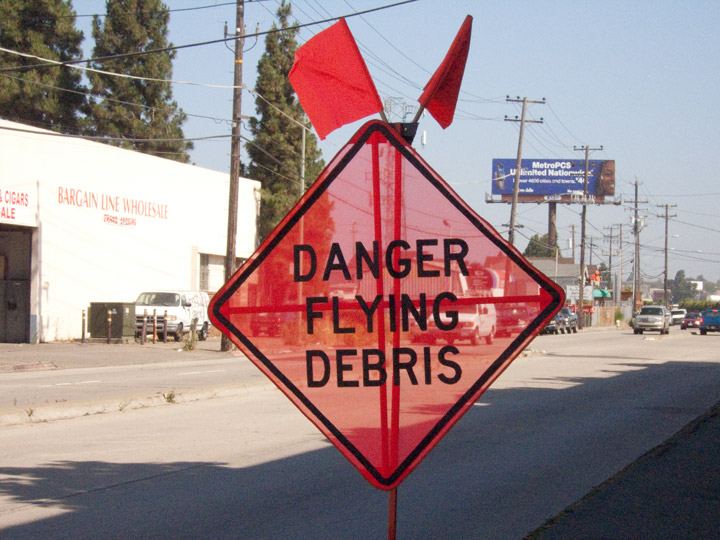 There's this weird sign just outside my studio window this morning. I'm not too sure what it could really mean in the context of my neighbourhood in Lovely Industrial East Oakland (we're not quite under any of the normal VFR or IFR departure or arrival paths for Oakland airport (KOAK), a few minutes' drive to the left down the road in the picture), but it kinda felt appropriate for this blog. I haven't been able to keep it up to date nearly as much as I'd like lately, mostly due to a relentless product release schedule at my day job and plain laziness on my part, so it's mostly just debris at the moment. I doubt that it's dangerous debris, but you never know.

Yes, I've been flying, most memorably a great flight down to San Luis Obispo (KSBP) and back with Evan H. a few weeks ago for the legendary hundred dollar hamburger, sharing flight duty and getting quite a lot of real and under-the-hood IFR flying in (well, Evan got all the real IMC; I had to make do with the cone of stupidity for a couple of hours). A lot of great scenery (that's a rugged part of the world, especially around Big Sur), generally benign weather conditions (if a little unusual for coastal California at this time of the year), and (as usual), some pretty good diner food from The Spirit Of San Luis at KSBP (right next to the ramp!).

As penance for my laziness, I've cobbled together a short video from the trip. Nothing special (and it turned out it was actually bumpier than either of us had realised, making a lot of the more interesting video footage useless), and not always entirely coherent, but it was a lot more fun than doing some of the pro videos I have to do now and then. If you've got a late-model Quicktime player and broadband, try this link; otherwise, try this one. If neither of them work, oh well, you probably don't have a Quicktime player for your browser… (or you don't have the patience to wait for it all to download). Oh, and it has a soundtrack, so don't be surprised if it suddenly starts blaring away while you're surreptitiously trying to watch it at work….
* * *
A few words about my fave useful iPhone app, ForeFlight Mobile (yes, I've reviewed it before on YAFB, and I'm even quoted on ForeFlight's site, but I'm not connected with the ForeFlight people, honest :-) )…. ForeFlight did much of the grunt work for the flight back from San Luis (the legs when I was PIC) — including IFR flight plan filing and a great deal of on-the-apron weather checking, not to mention NOTAM listing and much more. I'm finding this thing indispensable; not quite an EFB, but Pretty Damn Good at its intended uses.

I've only very rarely ever talked to FSS, either in person (when that was still possible), or on the phone (I've had online DUATS access since I was a student), but it's kinda ironic that I now file flight plans and get weather and airport info, NOTAMS, etc., through my phone. Just not by talking to a human with that phone….
Posted by Hamish at 6/29/2009 10:54:00 AM 1 comments
Email ThisBlogThis!Share to TwitterShare to FacebookShare to Pinterest
Newer Posts Older Posts Home
Subscribe to: Posts (Atom)