An Evening Of (Fun!) Failure 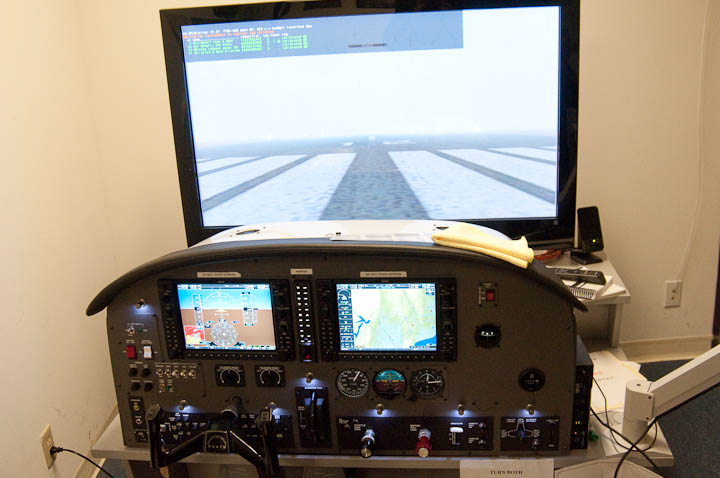 Somewhere just past GULLS waypoint on the RNAV RWY 25 approach into Rio Vista (O88), in thick day IMC, the G1000 GPS fails. Not just a GPS1 or GPS2 failure, or a RAIM failure, but a full GPS system failure. Perhaps the satellites have all just been shot out of the sky or something? Who knows? All I know is that the autopilot's making an unpleasant repeated "disconnect!" noise, and the HSI annotation is "GPS DR", i.e. dead reckoning. Time for plan B. First things first: are all the other instruments and comms OK (or at least plausibly still working)? Will the autopilot work on plain old heading mode rather than the nav mode it was just on? Yes to the second question (I switch immediately); "unsure" to the first. Everything looks normal — no big red X's or anomalous values on the screens — so I assume it's just the GPS. Which I can probably handle. The plane flies on; it's only been a few seconds since I noted the failure, but it feels longer. We're just inside GULLS with a stable flyable aircraft, so I don't need to do anything immediately, but I'd better get my act together fairly soon.

What now? Well, I'm flying the (excellent, loggable, certified) G1000 simulator at California Airways again, so I have time to think a bit without hitting anything in real life, but it's still stressful. John remains poker-faced at the sim's meta-controls. He'd mentioned something about "a scenario" earlier; this is it, I guess.

My scribbled notes from when I picked up Travis's ATIS for Rio Vista (Rio Vista doesn't have its own AWOS for some reason) earlier indicate a 1000' ceiling. Not too bad, but I don't trust it (Travis is some distance from Rio Vista), and we're well above 1,000' at the moment. So I call NorCal Approach (i.e. John) and tell them we need to go missed as we've got a total GPS failure in IMC. "NorCal" doesn't sound too concerned and gives me vectors, a climb-and-maintain 3,000' altitude, and a "when able, direct Sacramento VOR". I acknowledge the instructions and set up the HSI and OBS and autopilot to get me SAC direct, then start climbing. Everything non-GPS still seems to be working (but I wouldn't put it past John to throw in something like an alternator failure at this point, so I keep a good eye out for any other failures). A few seconds later "NorCal" asks my intentions. I need time to think, so I respond with that old standby, "stand by".

The only other approach back into Rio Vista is the VOR/DME approach, but without GPS I don't have DME, and (unlike a few years ago when I did my checkride on this approach for real), there's no radials from Travis VOR to substitute for DME (Travis VOR was recently decommissioned). No going back, then. I ask "NorCal" whether there are any VFR airports in the vicinity; NorCal replies that the nearest airport reporting VFR conditions would be Klamath Falls (KLMT). I've driven to Klamath Falls several times; it's in Oregon, literally hours away from Rio Vista by car at 70MPH, and probably involves all sorts of mountain passes or high en-route altitudes to get there (John has that sort of dry sense of humour). I ask what the ATIS at Sacramento Executive (KSAC) is reporting; after a short delay I get the picture: KSAC's at absolute ILS minimums, but a) it at least has a working ILS, b) it's an approach I've flown many, many times in IMC and under the hood in real life; and c), it's relatively close. Oddly enough, KSAC ATIS (i.e. John) is reporting "ILS in use runway 2, circle to land runway 20", which wouldn't quite work given the reported weather, but never mind — I don't think I've ever heard KSAC ATIS without that phrase.

I request the KSAC ILS RWY 2 approach into Sacramento, get vectors for the localizer, and within a minute or two things feel more-or-less routine. Plain old GPS failure is not, after all, any sort of emergency (or shouldn't be), just an annoyance. I can remember how to set up for the ILS and the missed approach manually, and at least the autopilot still works well enough for my purposes (flying this sim is a lot harder than flying a C172 in real life, and it's especially difficult to hand-fly smoothly by instruments alone). I join the localizer and a little later intercept the glideslope, then get handed off to Executive tower. Piece of cake! Then I notice the alternator's failed. And the engine seems to be losing power. What had John said earlier about slow power loss? There's no carb heat in this plane (I don't think I've flown a plane with a carburetor for years), but aha! I hit the auxiliary / electric fuel pump. The engine returns to normal again, gratifyingly quickly. I call "tower" and tell them I've had an electrical failure in IMC. Do I want to declare an emergency, they ask? I guess so — I have thirty minutes of battery power from this point, but with IMC widespread across the area, I'll probably need every minute of that time (at least) if I have to go missed. I turn off inessential electrical gear. I report passing EXEC, the ILS LOM (it's still in use, unlike RORAY, the old familiar KOAK LOM), and prepare for a down-to-minimums approach. I just know I'll have to go missed — a dingo on the runway, a huge squall line across the airport, fire in the localizer transmitter hut, an outbreak of sudden-onset ebola in the control tower, something like that from deep within the simulator — and resign myself to remembering how to do a hold manually (a hold I've done manually many times in real life, but — as I keep whining — the sim's a lot harder to fly gracefully and smoothly than the Real Thing).

But no — about 50' above decision altitude the runway approach lighting becomes visible, and a few seconds later I'm on the ground. Cool! This is the stuff good simulators are made for….
* * *
Just one in a whole string of failures this evening, all of them an education, most of them really enjoyable: alternator failures, a complete engine failure on departure, the total GPS failure, a combined nav 2 / comms 2 / GPS 2 failure, a pitot failure, a fuel pump failure… some in combination, some on their own, and all in IMC. Again, this sort of thing is just what the G1000 simulator's for — and just what I needed. All of the worst failures were mine: forgetting to get the emergency checklist out, forgetting to turn the auxiliary fuel pump on the first time the main one failed, not recognizing from instruments alone that the engine had just failed (the sound on the sim was off), being too hesitant in making major decisions, getting a critical approach altitude wrong, etc. But that's the whole point, I guess: get the failures out of the way now rather than in real IMC. In any case, I didn't do so badly that I'd have crashed in real life, and I also got to "fly" the new 200' minimums RNAV approach into Marysville (KMYV), which, despite the excessive approach plate small print, is easy to fly and (hopefully) portends more 200' minimums LPV approaches around here.

Unfortunately it sounds like the sim may be moved to a different location in the next few weeks, which would make it difficult for me to get to. This particular sim has been a godsend in many ways for IFR currency and proficiency training for me, and I'll be really sad to see it go (if it goes). We shall see….
Posted by Hamish at 9/29/2009 11:36:00 PM 1 comments
Email ThisBlogThis!Share to TwitterShare to FacebookShare to Pinterest

A potpourri of an evening, aimed at keeping me VFR- and club-current, and especially night-current, with John in the right seat on a short hop to Tracy (KTCY) and back. Not much to report here about the actual flying bits (except just how soberingly bad the first landing and time around the pattern was; at least by the third time around I was able to do a smooth and successful night soft-field landing and takeoff without prompting); but as always, the Bay from above at night returning over the hills into Oakland was breathtaking, and the Oakland airport environment itself the usual enchanting mixture of the mundane, the bizarre, and the sublime.

I won't say which was which, but the sights ran the gamut from the Texas Rangers 757 standing on the apron near the old Alaskan hangar, the Kaiser 737 wedged into a space right next to the fuel pumps causing me to wind my way around the orange markers to get refueled without hitting the plane's tail, one of the local Piaggios doing (loud and wide) pattern work (at great expense, I'd guess), the Coast Guard helicopters doing night-vision practice work around and over a darkened runway 27L (no lights at all), and, of course, the usual familiar feeling of standing on the ramp in the dark surrounded by lights and sounds and movement.

Back in the Oakland Flyers club house, Lou makes fun of John and my dueling iPhones. An occupational hazard for nerdy hi-tech flying amateurs like me, I guess. All my flying nowadays involves direct physical interaction with computers much smarter than even the biggest computers available in the university computing lab when I was an electrical engineering student; even the iPhone comes into the equation for every flight now. Not complaining, mind you (too much of a nerd for that); on the whole it's a great improvement for almost all the flying I do.
Posted by Hamish at 9/23/2009 09:58:00 PM 0 comments
Email ThisBlogThis!Share to TwitterShare to FacebookShare to Pinterest
Newer Posts Older Posts Home
Subscribe to: Posts (Atom)