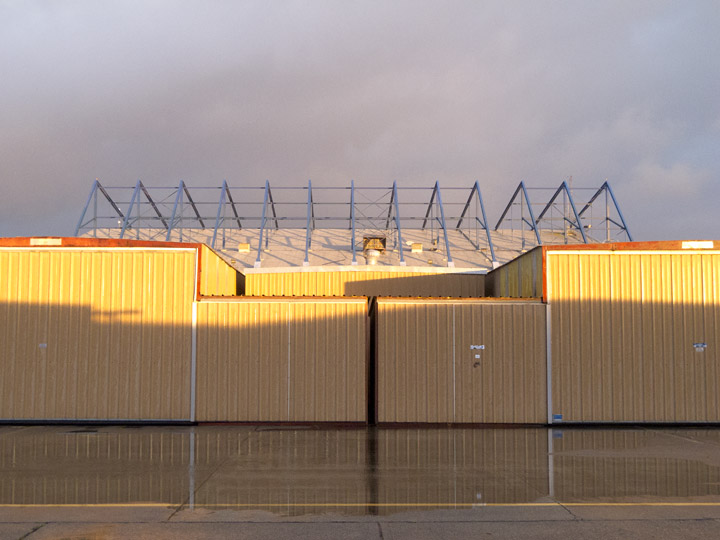 I live in a part of the world — Northern California — where you can confidently make plans for late May and know it won't rain. There might be a bit of coastal stratus or fog, and it might be a lot cooler (or hotter) than you'd hoped for, but it won't rain. It just doesn't rain around here — at all — from late April to early November in a typical year (and when it does, it's literally front page news, with breathless live reports on the evening TV news shows). So a few weeks ago when I booked a flight for this evening, I didn't give it much thought: a nice VFR run down to Monterey (KMRY) or up to Santa Rosa (KSTS), with a passenger or two who'd enjoy the view.

But when I check the forecast a day or two ahead, it's for rain. I've lived here long enough to not really take that forecast seriously — the weather guys get it wrong, a lot, when they forecast rain at this time of the year. But we've had a record year for rain (and snow up in the Sierras), and earlier today it's obvious: this isn't going to be a VFR sight-seeing flight, if it happens at all. I tell my passengers that the flight's off, but I keep the reservation, thinking I might get some nice IFR in (actual) IMC experience if things turn out OK — it's relatively warm, the airmass is fairly stable and predictable (at least on the large scale), and if I don't stray too far from home, I might safely spend a significant proportion of the flight peering out into that bright white or grey enveloping the windshield. Not the sort of thing a typical passenger would probably enjoy, but definitely my kind of fun.

And so it goes: by the time I'm at Oakland (KOAK) in the early evening, it's raining, and the field's IFR — the ceiling's low (but not too low to get back in safely if something goes wrong on departure), and the visibility's down to maybe 1.5 miles (officially; unofficially I'd have said it wasn't more than a mile in some directions). I've filed a couple of suitable IFR flight plans, and I've checked and checked (and rechecked) DUATS and Foreflight, so I'm cautiously optimistic that I'll be able to fly. The weather at my chosen destination (Napa, KAPC) is better than at Oakland (but still pretty mixed), and the en route freezing levels are fairly high (a few thousand feet higher than the highest altitude I'm likely to get assigned going there or getting back). Nexrad shows nothing serious, and there are no reported thunderstorms or anything especially worrisome in the area. And it's a short flight, combining a fair IFR procedural and communications workout with several outs in case of problems. So what am I waiting for?!

Not much, really, and after a careful pre-flight, I'm sitting at the run up area off 27R with rain streaming down around me, programming my clearance to Napa (basically vectors for SABLO intersection, Scaggs Island VOR (SGD), direct, a route I've been given many times, IMC or not). From experience I predict it'll actually be flown with a couple of initial vectors, then REBAS intersection direct, then straight onto the localiser for runway 36L. Which is basically exactly what happens — after being cleared for departure I enter the clouds at maybe 1,000', and spend the next fifteen or so minutes in and out of (mostly in) IMC as a rather benign set of stratus and cumulus passes around me at 4,000'. I monitor the outside air temperature (OAT) every few minutes; it doesn't go below about 4C the entire time; each time I break out I look around for thunderheads or anything malicious, but really, it's all looking rather nice; it's not even turbulent except for some very minor stuff here and there. There's not much traffic on-frequency, and I don't (quite) get the usual Napa slam on to the localiser — this time I'm basically left to my own devices from fairly early on and can get down early rather than attempting a 1500 fpm descent in actual.

On the localiser into Napa I break out very early, then realise that, while Napa airport itself is actually VFR, I'm about to follow the localiser back into some extensive cloud — the localiser seems to be boring its way through the only large cloud formation in the area. If I were VFR at the moment, I'd just go a mile or two left or right (it wouldn't matter much which), and I'd be safely and legally VFR all the way to the runway. But I head on regardless, straight down the localiser, straight back into the clouds, and break out again well inside LYLLY (the IAF) at maybe 1,000' — and a mile or two to either side the ceiling's at least 5,000'. Yes, the clouds seem to have deliberately formed a long tunnel around the localiser, which makes me smile as I break out. Following Napa tower's instructions, I circle south for runway 24, and land on a wet runway in what seems to be a very dead time for KAPC; the place sounds and feels deserted (all those Northern Californians afraid of the unseasonal rain, I suspect). I taxi back to runway 24's runup area and wait for my next clearance, which comes after a minute or two's delay. The clearance is exactly what I expect, and after another minute or two of programming and double-checking, I'm cleared for departure.

A minute or so later, I'm back in IMC, heading for Scaggs Island VOR (SGD), then REBAS intersection. Just past SGD I'm given "Oakland direct, expect the ILS 27R", and that's what happens, with the inevitable stream of vectors for the ILS and traffic closer in to Oakland. The cloud bottoms and tops are all over the place now, and I'm in IMC pretty much continuously until I break out on the ILS back into Oakland. Every now and then I break out between clouds or layers; at one point I see the Southwest 737 I've been hearing on the radio paralleling me 1,000' higher and off to my 2 o'clock as we both break into one of those cloud canyons; then it's gone again (I can see it on the G1000's traffic display, as well; remarkably, it doesn't seem to be going much quicker than me, which can't be true). A few minutes later ATC calls traffic at my one o'clock, heading north, type and altitude unknown; I respond that I'm in IMC but I'll keep a look out if I get clear of the clouds. A few seconds later I break out into another cloud canyon, and there a few thousand feet below me, very (very) close to the ground flying up a valley in the hills, scud running below a broken layer, is a yellow Husky or Cub (or similar — it's a bit difficult to tell from this distance). He disappears below the layer as I tell the controller what I'm seeing and tell him if that's the traffic, I have it in sight — or not, as by then I'm already back in IMC.

I get vectored onto the ILS back into Oakland, and break out at about 900'. Landing's pretty routine, and I taxi to Kaiser for fuel. It starts raining again just as I start refueling (of course!); but it's definitely clearing on the larger scale, if a little raggedly. Just as I finish refueling, I slip badly and manage to scratch the paint on the leading edge of the wing — a small scratch, maybe 3cm long, and not really visible unless you're looking for it, at least in the semi-light during refueling and hangaring — but things like this always end up costing an arm and a leg, and later I squawk the scratch with a small mea culpa. We shall see what this ends up costing me….

Back in the hangar, the evening sun breaks out weakly as I'm closing up, and the Port-A-Ports where I am become a lovely mess of puddles, sunshine, structure, and the odd sodden business jet. Hence the photos above and below, taken from the hangar. Not quite what this Anglo-Australian Californian expected to see at this time of year, but never mind.

A good flight — quite a lot of benign actual IMC, and, as always with a short IFR flight to Napa, quite a navigational and procedural workout. It's a shame about the paint scratch (and the pulled shoulder from the same slip), but it's all flying — in some way or another…. 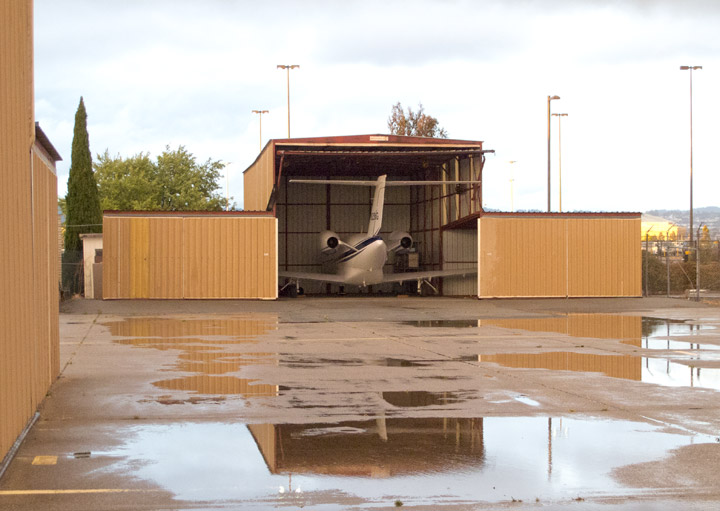