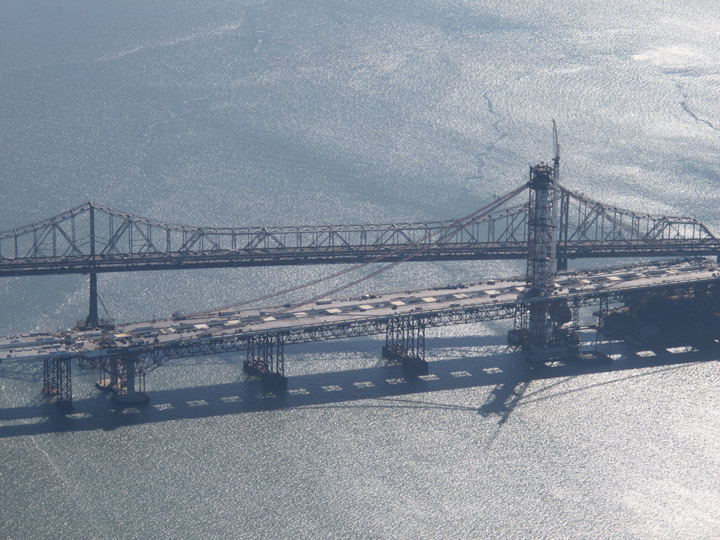 The Bay Bridge Under Construction (from 2,500' MSL).
On the ramp at Oakland (KOAK) it's a classic California winter's day — sunny, cloudless, windless, 19C (no, I don't know what that is in Nineteenth Century measurements — look it up!) Yes, it means yet another drought's on its way, but it's pleasant outside right now, and that's all that matters, right? Standing in front of 051's hangar I junk my original plan for a disciplined IFR run down to Monterey (KMRY) and back, and instead prepare for a leisurely VFR trip down over the Golden Gate and past Devil's Slide, Maverick's, Half Moon Bay, Pigeon Point, Santa Cruz, Watsonville, Moss Landing, and other assorted local Pacific Coast landmarks to, well, Monterey. Why Monterey? Why not? I used to do this trip a lot, and this morning I just feel like flying down the coast and back up the inland route after a snack and coffee at one of my fave California airports. The hundred dollar coffee, I guess. 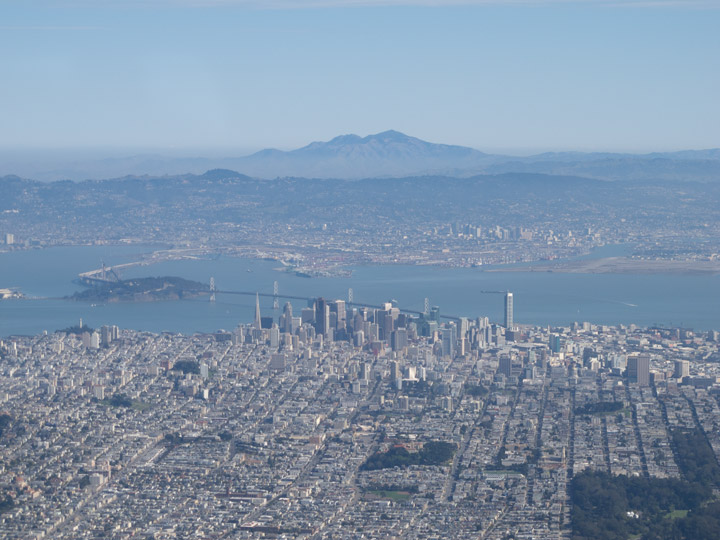 So thirty minutes or so later I'm climbing over the Golden Gate and San Francisco on an ad hoc clearance into the San Francisco Class Bravo at 3,500' along the coastline. It's beautiful — I can see for miles and miles — and even being vectored well out of my way for a United 747 departing KSFO right into my original path is fun (especially since the vectors take me just behind and over the 747 close in to KSFO itself; knowing a few tech crews myself (mostly Qantas and BA), I imagine the cockpit crew rolling their eyes as they hear that they're being altitude-limited so that my mighty Cessna 172 can roll on by on a glorified sightseeing trip). I resist making the obvious joke on-air about "caution wake turbulence from the Cessna crossing above you". I head slowly back to the coastline and potter on southwards, climbing to 5,500' to help keep me visible to ATC — radar coverage is patchy to non-existent for a stretch of the coast there below about 5,000' due to the Coast Range. From 5,500' the view's amazing — I can even see the Sierras some 150NM off to my left in the distance; ahead, I can see at least as far as Point Sur.

Closer to Monterey I'm handed off to NorCal's Monterey sector and slowly notice that there seems to be a bit more traffic than normal on air. This is usually a pretty sleepy sort of sector, but the controller seems to be handling a bunch of business jets and private planes heading mostly to or from Monterey. More intriguingly, I can see what looks like a blimp (or maybe it's the local Zeppelin) way off over the ocean abeam Monterey. What the hell's it doing there, I wonder — a sightseeing excursion for paying customers? A naval exercise? The ghost of the USS Macon? 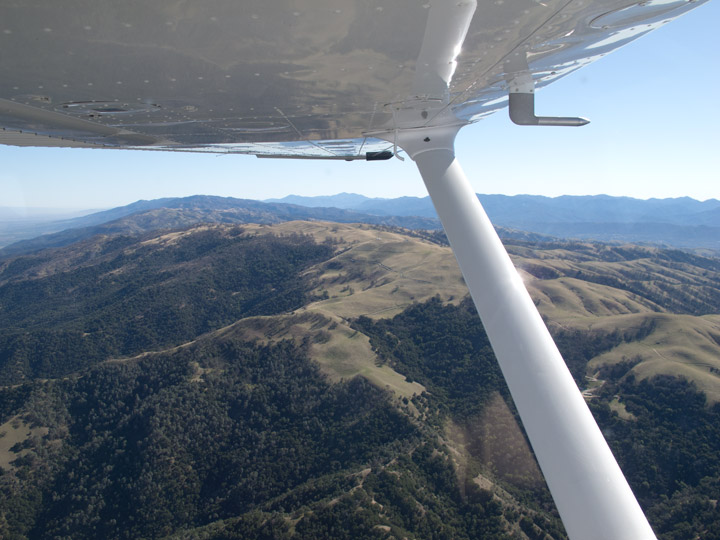 The View Outside From The KMRY RNAV 28L Approach…
I put it out of my mind as I request the practice RNAV Y 28L approach with full pilot nav including the course reversal (just for fun — it's not loggable, but it sure helps with procedural currency) and head across the coast towards HIXIE, an initial fix for the approach. I've commented before on this and the similar localiser 28L approach, so I'll just repeat what I always say about it: this is a scarier approach in VMC than in IMC. When you can actually see outside the cockpit, you can't help noticing that after the course reversal you turn onto an approach segment heading straight at a range that rises abruptly out of the Salinas Valley in a set of peaks and ridges that are noticeably higher than you (and that rise close abeam you as you start the descent), and that the ground below you slopes off towards the airport at the same angle as the glideslope for a while, seemingly just below you much of the way (as I descend on the approach I can easily see individual people in the back yard of one of the isolated houses on the ridge below me). Luckily, Monterey tends to use the ILS 10R approach when the weather's really bad — at least with that you only have to deal with the ocean, not the rolling peaks and low-level turbulence in the other direction. 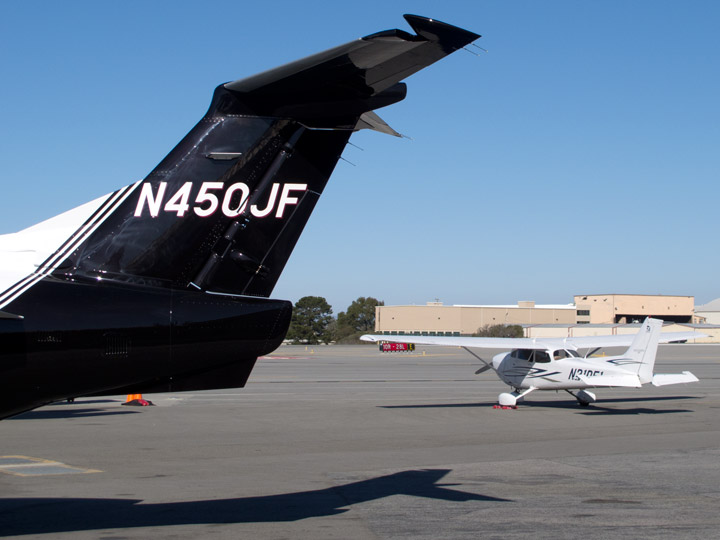 After landing I taxi to Del Monte Aviation, a place that over the years has become one of my favourite corporate jet GA FBO's (and no, I'm not being paid to say this — they don't even know I exist). The first thing I notice is that the guy waving me in to Del Monte's parking area has to step through several business jets to do it, and I gingerly edge my way through the gaps between the tens of millions of dollars worth of shiny gear all around me to park (I have this special admiration for the ramp guys — standing in front of even a small Cessna with its prop whirling dangerously a few metres away from you as you signal to some unknown guy in dark glasses lurching straight at you in it takes a lot of guts). The ramp guys chock me and get my fuel order and I wander in to the reception area, looking kinda scruffy in my usual black jeans, t-shirt (it's winter in California, remember), earrings, and bad shoes. Outside on the ramp right next to the reception there's a shiny new Embraer Phenom 100, looking gorgeous in the sun; inside it's busy. There's a four-stripe pilot at the desk trying to second guess his passengers with a catering menu, there's a bunch of suited guys in the corner watching some sort of golf game on the big screen TV, there are uniformed pilots and support staff purposefully walking around here and there, and behind the desk the staff is handling a bunch of phone calls and requests. What the hell?! Usually I'm either the only pilot in reception or there's only one or two other people hanging around. Once I get my fuel order in with the desk staff there I wander off and find some coffee and some rather nice chocolate chip cookies. Not bad, I think, and I find an empty chair in the main lounge, feeling smug about being the only person not in uniform or a suit, and still getting treated with friendliness, efficiency, and, above all, humour by the Del Monte staff. In the background the TV golf thing seems to be grabbing the attention of more people, but what would I know about golf? (What would I care about golf?) I'm semi-famous amongst friends for unwittingly referring to golf clubs as "golf bats", and the planes out on the ramp are much more interesting. 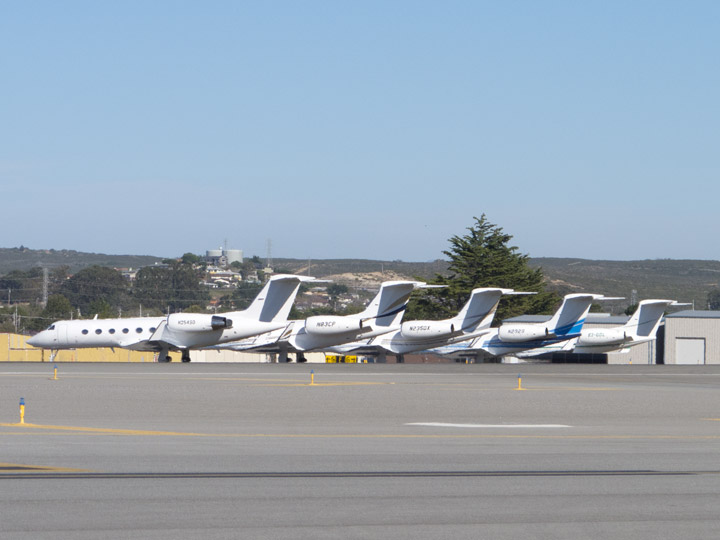 Over on the other side of the ramp there are several rows of neatly parked Gulfstreams and the like. As I'm sitting there with the coffee and cookies, several business jets arrive either for Del Monte or the other corporate business jet center up the ramp. There's a Pilatus PC12 that arrives while I'm watching and is parked right next to my little Cessna. Two helicopters land, one of them some sort of media thing. My plane gets refueled in between some other fuel requests. Something's up, but what? I would have asked the staff but they're kinda busy with catering and ground transport requests. Instead I somehow manage to get drawn into a funny animated discussion about Twilight going on behind the desk (can I be the only person in America who hasn't seen it?)

I sign the fuel receipts and wander out to the plane again. I start up and talk to Clearance for the VFR departure towards Hollister (KCHV); while I'm sitting there idling away on the ramp it occurs to me that the Del Monte folks might not like me blowing crud all over their besuited customers walking to and from the reception, but never mind — no one complains, and in a few minutes I'm way up taxiway alpha doing the runup.

On departure I can see a banner tow out over the point near the blimp — what is going on, I wonder? Monterey mid-week isn't exactly banner tow or blimp territory. A helicopter departs behind me for Carmel. Finally, I hear the magic words "Pebble Beach" from the banner tow as he requests a transition from tower. D'Oh! It's the AT&T Pebble Beach National Pro-Am, apparently. I'm just not the sharpest tool in the toolshed, am I? It's in all the media, now that I look — there's a lot of expensive golf bats being wielded professionally down there today apparently. Who knew?! Everybody but me, I guess.


On final back into Oakland's 27R, tower calls out a primary target at 12 o'clock, unknown altitude, less than a mile, "probably birds". I keep a sharp look out and, sure enough, a few seconds later there are two large eagles or hawks soaring up at me straight ahead; I swerve a little and then immediately after that there's a bunch of (I think) seagulls wheeling around between me and the threshold. I take evasive action, but there's not much you can really do except avoid the obvious targets and hope that you don't get hit. Down below me there are literally hundreds of seagulls congregated in some sort of small lake or pond in the golf course. This can't bode well….

Back on the ground, compared to Monterey, Oakland seems even sleepier than usual. But then our golf courses can't quite boast the views (or greens fees) of Pebble Beach, I guess.
Posted by Hamish at 2/10/2012 02:19:00 PM
Email ThisBlogThis!Share to TwitterShare to FacebookShare to Pinterest
Labels: kmry, koak, vfr