Back In The Comfy Chair 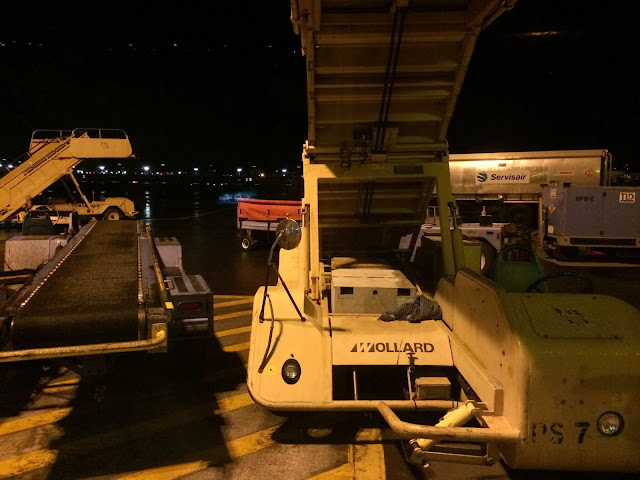 Once again I'm sitting in the California Airways Comfy Chair at Hayward (KWHD), answering John's questions and feeling a little... well, uncomfortable. How could I forget that detail? What does this question really mean? And so it goes — but this time it's for the club's DA-40 signoff, and this time it's actually pretty straightforward. I filled in the DA-40 fam sheet while down in LA over the last few days (I have a client in the Mid-Wilshire area, and I spend an inordinate amount of time at both Burbank and Oakland airports as a result; unfortunately, all the flying between those two airports is done on Southwest, not in the DA-40), and I didn't find it difficult — just incredibly tedious. Oh well — at least it's not a bundle of trick questions or anything, and if I can't work out how to answer all of those questions quickly or even by memory (in an emergency), I really shouldn't be flying this plane. After a fairly short session, John signs me off for the DA-40 without too much ribbing about my spelling mistakes and typos.

Theoretically, now that I'm signed off I could just wander out on to the ramp and fly away in the DA-40 on my own, but I have other things in mind. In particular, I want to drag John along to help me tighten up power setting / throttle management on approach, landing, and takeoff (it was pretty rough and abrupt last time), and I want to try a practice approach somewhere to remind me what IFR flying is like, and to set the stage for further work in reclaiming IFR proficiency sometime in the new year (maybe). So we drive off to the Green Ramp, and twenty minutes later we're sitting off runway 28L, waiting for take off. The plan is to do the left 270 departure off towards SALAD intersection, while contacting NorCal Approach near the Hills for the practice RWY 28L LOC/DME approach back in to Hayward. I tell John I'll do the approach without wearing The Cone Of Stupidity (a.k.a. "The Hood"), mainly because I think I'll screw up enough of the approach after 16 months off without also worrying about keeping the plane right-side-up. Plus this is a Procedure Thing (a.k.a. "taming the beast", where "the beast" is my old friend the G1000, a system I really like a lot, but that does have its idiosyncrasies) — or at least that's what I tell myself.

Hayward Tower dumps us over Castro Valley, and I call up NorCal, who sounds really busy today. Luckily, I don't stumble too badly asking for the approach, but I do feel really rusty. The controller gives us a heading of 90 degrees for sequencing, and I struggle to remember how to set up both Foreflight and the G1000 properly for the approach. With some hints from John, I finally get the approach set up, and it's only then that I realise I just didn't study or prep properly for this — too much effort into getting the sign-off, too little into actually looking over the approach plate(s). I could probably still do the Oakland ILS and / or RNAV approaches in my sleep, but I haven't done IFR into Hayward in many many years, and it shows. I don't even know the names of the important waypoints or fixes, let alone the associated altitudes. Oh well — that's why John's along.

A lot of it does come back pretty quickly — the noting of crossing or minimum altitudes, intersection names and distances, and the missed approach procedures, but I still spend some time hitting the wrong buttons on the G1000, and my power and autopilot management skills definitely need more work. And I stumble on radio calls a bit more than I'd like (but at least I catch myself doing that). But it's an enjoyable experience, and as we get a couple of long vectors for traffic and then the localiser, it all sort of comes together in my mind. The controller's busy as hell, and there are several students on air doing approaches or whatever who are taking way more of his time than he'd clearly like, and it makes me wonder if we're about to blow through the localiser or hit the Fremont hills looming up ahead. But we get turned on to it in the nick of time (and the hills are actually below us, despite the way it looks from the cockpit), and I basically let the autopilot handle most of the horizontal tracking, while I watch with an eagle eye and set up the vertical bits. I can't help noting the autopilot's having trouble tracking the centerline at first, and wonder why out loud. John points to the crosswind display on the G1000 — there's something like 33 knot quartering headwind pushing us away. Looking out over the nose, I should have noticed — we're heading quite a way away from the airport (which I can see off in the distance) towards the hills, while tracking more-or-less correctly. A lot of the altitude management stuff comes back, with John's help, but I have so internalised the C172's settings, that I don't always do things as smoothly as I should. But, again, that's basically why John's here….

At minimums I dump the power, pull back, put in full flaps, and, a few seconds later, we're on the ground for a series of touch and goes in the pattern. As hoped, these end up tightening my control over the power settings and general flying, and a few times around the pattern later, I call it a day with another swooping left 270 to get us into the right traffic pattern for 28R (when the controller asks if we want the left 270 rather than going the long way around, I answer with something like "2MA, sure!", which surely isn't approved aviation speak, but I guess it did the job).

And once again, I don't have a suitable photo from today's flight, so here's one from my latest trip to LA — a sight I see pretty much weekly from the Southwest terminal at Burbank (KBUR). One day in the next six months I hope to fly the DA-40 there and back for business. We shall see….
Posted by Hamish at 12/21/2013 05:28:00 PM
Email ThisBlogThis!Share to TwitterShare to FacebookShare to Pinterest
Labels: khwd, local, vfr