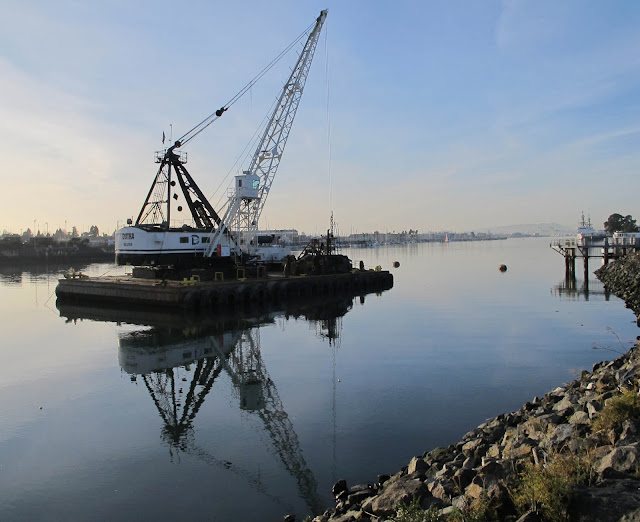 I still need to do my BFR (Biennial Flight Review) to get back into flying legally, so here I am in the California Airways office at Hayward Airport (KHWD) with John, sitting in the Comfy Chair being grilled on airspaces, VFR sectionals, and sundry other ... stuff ... to do with regulations and safe flying. John asks me what this particular airspace is, and I realise that while I know what it means (in this case, that 23 year old student pilots from Travis in giant C-17s will be under the hood in the vicinity of my little DA-40 or whatever, and that while I don't have to get permission to enter the airspace, keeping a good lookout might be appropriate),  I can't immediately remember what it's actually called (an Alert area). I quickly come to the conclusion that I still have an IFR pilot's view of airspace, which isn't all that helpful now that I'm likely to be mostly flying VFR. You fly IFR, and, to a first approximation, airspaces are the controller's problem; VFR, they're yours. It's kinda mortifying how poorly I remember some of this stuff.

On the other hand, I have done my homework (including a self-test worksheet from John), and most of the regulatory and other questions are not that hard, and much as I loathe the bad writing and inscrutable organisation of the FARs and the AIM, it's still light relief compared to some of the things I have to read or work on for a living as a techie. So the verbal bits go OK — John doesn't try to make the questions tricky, or ask about obscure regulations that would have no impact at all on a GA pilot like me — and we finish up after a little more than an hour, and decide to go flying. BFR part one, accomplished!

The agenda for the rest of the day was originally to get a club sign-off on the DA-40 as well as doing the BFR. Unfortunately, I haven't got the paperwork ready for the sign-off, so the focus today will be on the BFR only. I'll have to do the sign-off paperwork some other time -- I'd like to be able to rent the DA-40 on my own, as it's definitely a nice plane to fly.

This time things work really well with my iPad checklist, and that part goes OK, if slowly (I've internalised the complete pre-flight checklist for the 172s (including all thirteen fuel test points), but not the DA-40 yet). Once in the cockpit, I'm impressed at how well the new RAM mount for my new iPad Mini works (yes, I broke down and bought John's old iPad Mini after he got a new one). This time, the iPad just works, and throughout the flight it's a comfortable and useful addition to things. There's only one thing that irritates me — the Foreflight basic airport info should include pattern altitudes for each runway. Never mind, I'm sure I'll cope.

We depart VFR for Napa (KAPC), one of the most familiar non-Oakland non-Hayward airports in my life, and do the transition through Oakland Tower's airspace; we're then handed off to NorCal Approach. I haven't done this transition in years, and it probably shows — I pester John for hints on what happens next, and I'm not as immediately familiar with the various landmarks as I should be. Flying out of Oakland is definitely more straightforward, but then again, I can't rent a DA-40 there, can I? Hayward works fine if you can live with the little irritations of being a small Class D airspace airport wedged in under Oakland's busy Class C airspace (an airspace that extends to the ground only literally metres from the end of Hayward's runways and that gives you a 1,500' ceiling on departures that haven't been cleared into the Class C anywhere around the airport); Oakland's Class C is itself under San Francisco's Class B airspace, but that's less troublesome for departures towards Napa. Plus Hayward's a longer drive for me, but not significantly so (I could be like John and ride my bike, but I already ride my bike every day as part of getting to work, so sometimes I feel I need to exercise my car on drives like this).

So we potter off towards Napa, and NorCal gives us the frequency change about twelve miles out. I call Napa Tower and tell them we're inbound for touch and goes, and the controller responds with standard instructions for runway 6. This is a (somewhat) new one for both John and me — we both almost always get 18L or 18R, or 24. Woohoo! But I'm more interested in the controller's accent (being a funny-accented guy myself — I collect accents) and ask John what he thinks her accent is. Neither of us is sure, but John's probably right that it's very slightly Caribbean, maybe Guadalupe; in any case, it's pleasant and intrigues me the entire time we're at Napa.

The first touch and go at Napa is a fairly straightforward thing from a right base, and I don't break anything or kill anyone, even if I did come in like I was landing a bit short. There's really not much wind, but there's more traffic than I expect, with a constant (small) line of planes waiting to take off much of the time. Just as we're downwind abeam the tower for the second touch and go, tower clears me for another touch and go, with the short approach. Alllriiiighht! I think (I love these swooping approaches), and go ahead and try it. First lesson here: you can easily do a forward slip in the DA-40, and while it feels and looks dramatic from the left seat, it doesn't actually lose you much airspeed or altitude. Oh well. Again, I actually make it onto the ground and back up into the air without breaking anything (and only once, not repeatedly), but it wasn't as smooth or as professional-looking as I'd like.

The next few times around include a couple of power-off and no-flap approaches and landings, and, again, while they're nothing to write home about, they don't cause me to question my choice of ways to spend a Saturday afternoon (and what always feels like millions of dollars :-)). Despite the fact that I don't seem to have internalised the proper power settings for each part of the pattern, John seems satisfied, so we head back out over San Pablo Bay to do some airwork. The next fifteen minutes or so have me either repeatedly on the edge of a stall as I wander around the sky, or actually stalling, or doing steep turns (and definitely not stalling). I love this stuff, even if it's not the aerobatics I used to do, and even if we can't do spins. Again, although my flying is nowhere near as precise as I'd like (that word "agricultural" keeps popping into my head at times like this), John seems satisfied, and we head off back to Hayward.

We call up NorCal and tell them where we're going, and the rest of the flight — over Berkeley, over the Coliseum abeam Oakland (KOAK) and so on all the way to Hayward — is familiar territory and relatively easy. At one point as we're somewhere north of Berkeley I look west towards the Golden Gate, and, yes, it's Just Another Boring Bay Area Sunset out there. Hopefully fairly soon I'll start taking people up to see all this again....

I line up on final for Hayward's 28R... and promptly botch the landing. Well, as I seem to keep saying, I didn't kill anyone or break anything, but I was definitely a little slow, and while almost all my other landings were fairly smooth, this was not. Oh well. Must Do Better Next Time, as my old primary school teacher used to say. We taxi to the Green Ramp, tidy up, tie down, order fuel, and drive back to CalAir. On the short drive back I can't help noticing just how well-maintained Hayward Airport is compared to Oakland Airport nowadays — there may be fewer planes on the Green Ramp, but there's a waiting list for hangars, and those hangars, and the taxiways, the ramp and runway surfaces, the buildings, the lighting, etc., all feel both more modern and just plain newer than the Oakland equivalents (except, of course, Hayward's classic old tower). We discuss the different business approaches the Port of Oakland and the City of Hayward take to the respective airports — it's striking how much more care Hayward seems to put into the GA side of things. It's no secret that Oakland's not thrilled by the small GA side of its operations, but coming back to Hayward made it even more obvious. Not sure what it all means for flying out of Oakland, but we'll see....

Back at CalAir we do the debriefing — yes, John's signing me off for the BFR — and decide on next moves. I still need to get signed off on the DA-40, so hopefully next weekend I can get that out of the way and start flying out of Hayward again.

I wish I had some photos from the flight, but, hey, my little iPhone doesn't always come up to scratch for things like this, so what you see up there is a typically pastoral scene from my neighbourhood instead. Sorry.
Posted by Hamish at 12/14/2013 07:30:00 PM
Email ThisBlogThis!Share to TwitterShare to FacebookShare to Pinterest
Labels: khwd, local, vfr

Why is "agriculatural" a synonym for imprecise? It seems that agricultural flying - like crop-dusting - would need to be particularly precise due to low altitudes and the requirement to apply the materials carefully?

It's an old cricketing term. Richie Benaud used to drily say of a wild hit (or even a swing and miss) that it was "agricultural"….