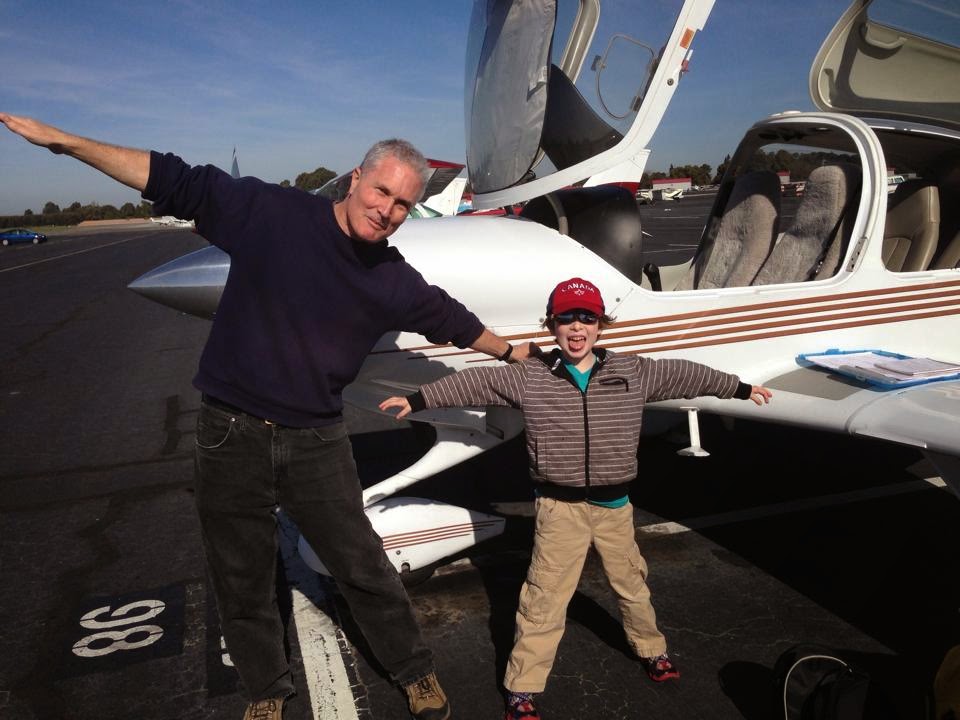 (The latest pic in a certain theme...)

I haven't taken my little nephew Alex flying since he was nearly four, and now he's six and a half (going on seven), and he's been bugging me about it for a year. So here we are, on Hayward's Green Ramp, pre-flighting 2MA, CalAir's DA-40 in bright morning sunshine. I had to cancel this flight a few weeks ago due to rain, but this time the weather's perfect. I get Alex to help with the pre-flight — moving the chocks, unchaining the wings, etc., while he watches business jets, little Cessnas, a helicopter, etc., taxi around us or take off and land. He asks all sorts of questions about ... well, everything... of course, and I can't always answer them, but he learns what each bit of the plane is called, and how to drain and check the fuel sumps. He won't remember it all, but it's a start, I guess. He particularly likes the way 2MA looks — it has the sort of sleek modern style that seven-year(ish) old boys think is cool — more so than the C172 which he in flew last time, anyway.

We climb in — Alex's mother Annette sits in the right front seat — and close the bubble (as Alex calls it). Alex loves his headset (which he's been wearing continuously since we finished the pre-flight) and I thank god that the back seats have no push-to-talk (he's not exactly the most taciturn of kids). We start up and I tell Ground we'll be doing the VFR Bay Tour transitioning through Oakland Tower's airspace, then taxi to 28L (I chose this runway rather than the smaller and closer 28R because I want Alex to see a big runway from the ground). I get a running "are we taking off yet? are we taking off yet?" from the back seat, which is pretty funny, especially when I have to patiently explain things like taxiing and the runup (I'm such a killjoy). I keep wondering when he's going to ask where the triggers are; sure enough, he points to the red autopilot disengage button on the stick and asks whether that's for the missiles. I wish, is all I say.

After a successful runup we taxi forward to the hold short line at Alpha, then get cleared for the usual takeoff and departure towards Lake Chabot below the Oakland Class C. And off we go... with Alex sitting quietly in the back as instructed, looking out intently at the world going by. We get handed off to Oakland Tower, then do the 880 transition up to the Bay Bridge, passing Alameda (where Alex lives) and Jingletown (where I live) to our left. Annette points out Alex's school for him, and he spots the various bridges across the Estuary, and then the Bay Bridge. He keeps saying things like "Coooool!" or "that's FANTASTIC!!!", which (of course) makes it so enjoyable. 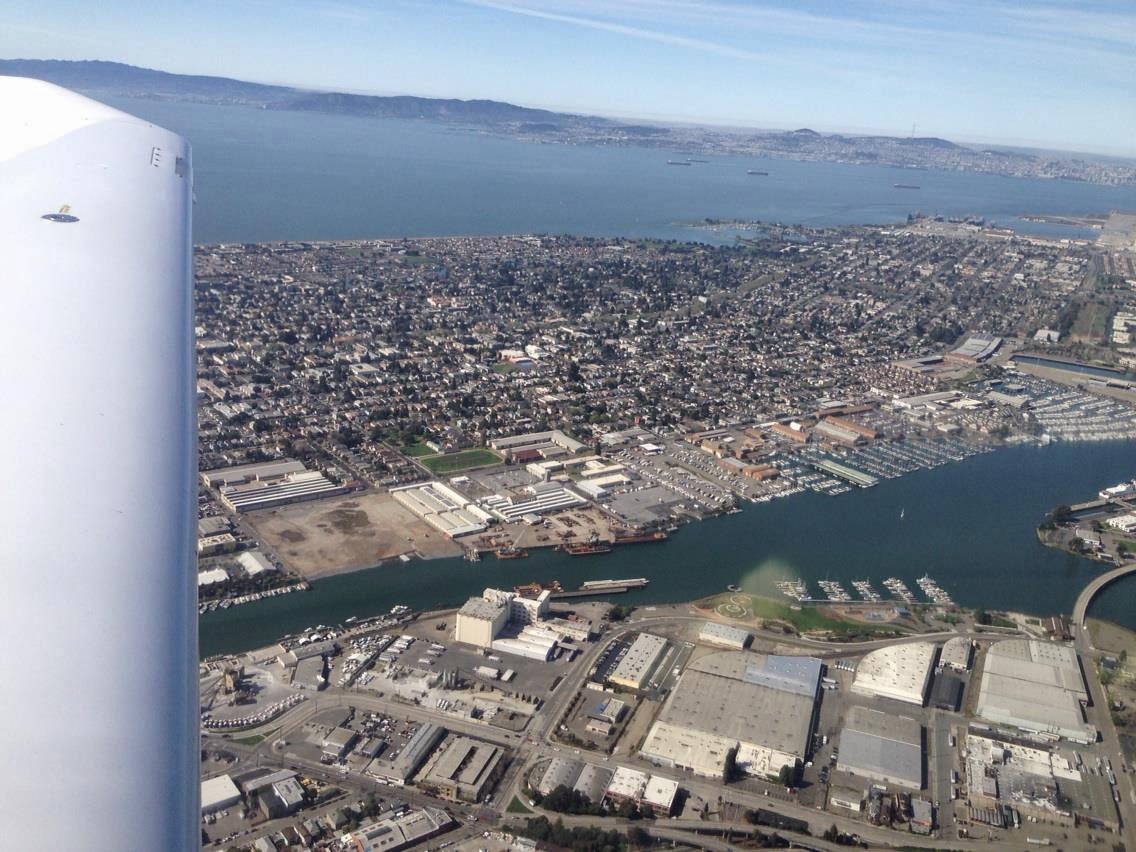 (I live in the industrial area at the bottom centre of the photo above; Alameda's the island just across the Estuary from where I live).

We fly past the Bay Bridge toll plaza then head for Alcatraz. I circle it at 2,500' so Alex can look at it; he said the other day he wanted to see a jail, so here it is. Sometime soon I guess we'll take him on a boat to see Alcatraz up close, but right now it's wreathed in a loose tongue of fog coming in from the Golden Gate — which itself is picture perfect, with the fog coming in from the Pacific and bright sunlight above it all. We head for the Golden Gate, circling it a couple of times in each direction for photos and to give Alex a good view. 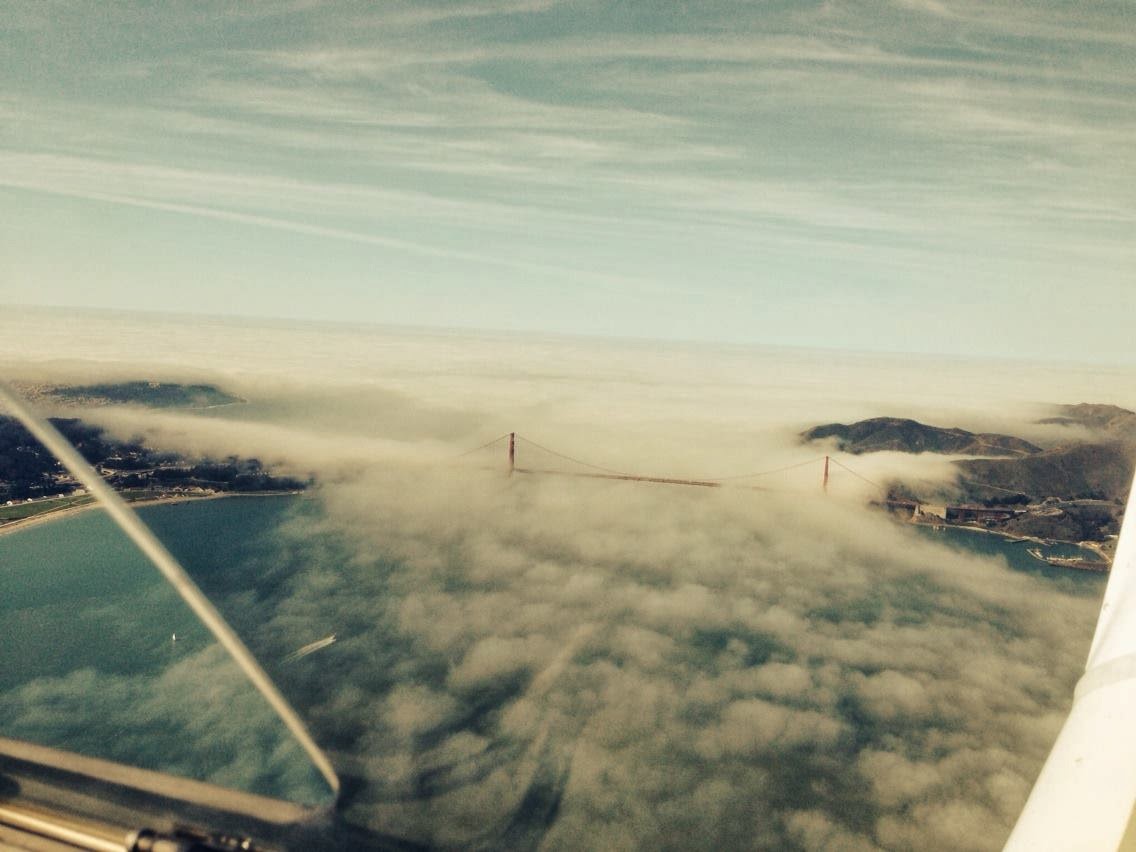 (An accidentally arty pic of the Golden Gate today).

We go back down the shoreline in front of San Francisco, then head across to Angel Island, then across to San Pablo Bay, where we drop flight following. I have the idea that I'll do some very light maneuvers for Alex to see how he responds; he loves them of course, so the turns get tighter, which amuses him, but Annette — who gets queasy at even the slightest bump — doesn't look so happy, so we return to normal level flying and head towards Concord, then along the Diablo Valley to Livermore. Alex recently went camping on Mt Diablo, and thinks it's really cool to see it from 3,000' up. On the way along the valley I do a series of little pull-up / pull-down maneuvers for Alex, which he later says was the high point of the flight, but Annette isn't so happy. Later, she sends me a short video she took on her iPhone of Alex reacting to the maneuvers — he's giggling ecstatically.

I was originally planning on doing a full stop landing at Livermore, and getting out to stretch our legs, but I suspect Alex would find touch-and-goes more exciting, so I call up Livermore Tower and ask for touch and goes. We get right traffic for 25R, and in what becomes a bit of an unintentional running gag, the controller promotes us to a Diamond Twin, then misunderstands my correction, meaning that for the entire time we're in the pattern, either we're a Diamond Twin, or she has our call sign one digit off (occasionally both). After about the third correction I just go with the flow — the controller's otherwise very competent and friendly, and who cares that we're missing an engine?! I keep waiting for a snarky comment on air about that missing engine, but everyone keeps it to themselves, I guess. It's predictably quite busy at Livermore, and we quickly get switched to 25L, which is a much smaller runway, and have our downwind extended a couple of times. Alex says he thinks the runway looks too small, but when we do the touch and goes, he's thrilled by the whole thing.

After the third touch and go (and to Annette's immense relief, I suspect), we head off back over the hills to Hayward. On call up to Hayward Tower, I'm amused that we still get asked to report "Cal State Hayward" when it's been "Cal State East Bay" now for years, and when the main landmark CSEB building was demolished a while back, and if you're not a local you probably have no idea where CSEB is otherwise, but never mind (it'll always be CSH for many of us locals anyway).

We land on 28R, taxi back to the Green Ramp, and tie the plane down. It's been a fun morning, and I suspect that the next time I take him flying, Alex will be sitting in the front seat. We shall see....
Posted by Hamish at 3/16/2014 04:22:00 PM
Email ThisBlogThis!Share to TwitterShare to FacebookShare to Pinterest
Labels: khwd, local, vfr

What a great, heart-warming story. This is just the type of stories that AOPA should be promoting if they want to "grow" the pilot population.

John -- thanks! It was a lot of fun, and he loves flying, but realistically, unless someone like Uncle Hamish is around to fund him, he's never going to be able to afford to learn to fly until he's, well, as old as I am, I suspect. It's just so damn expensive nowadays...