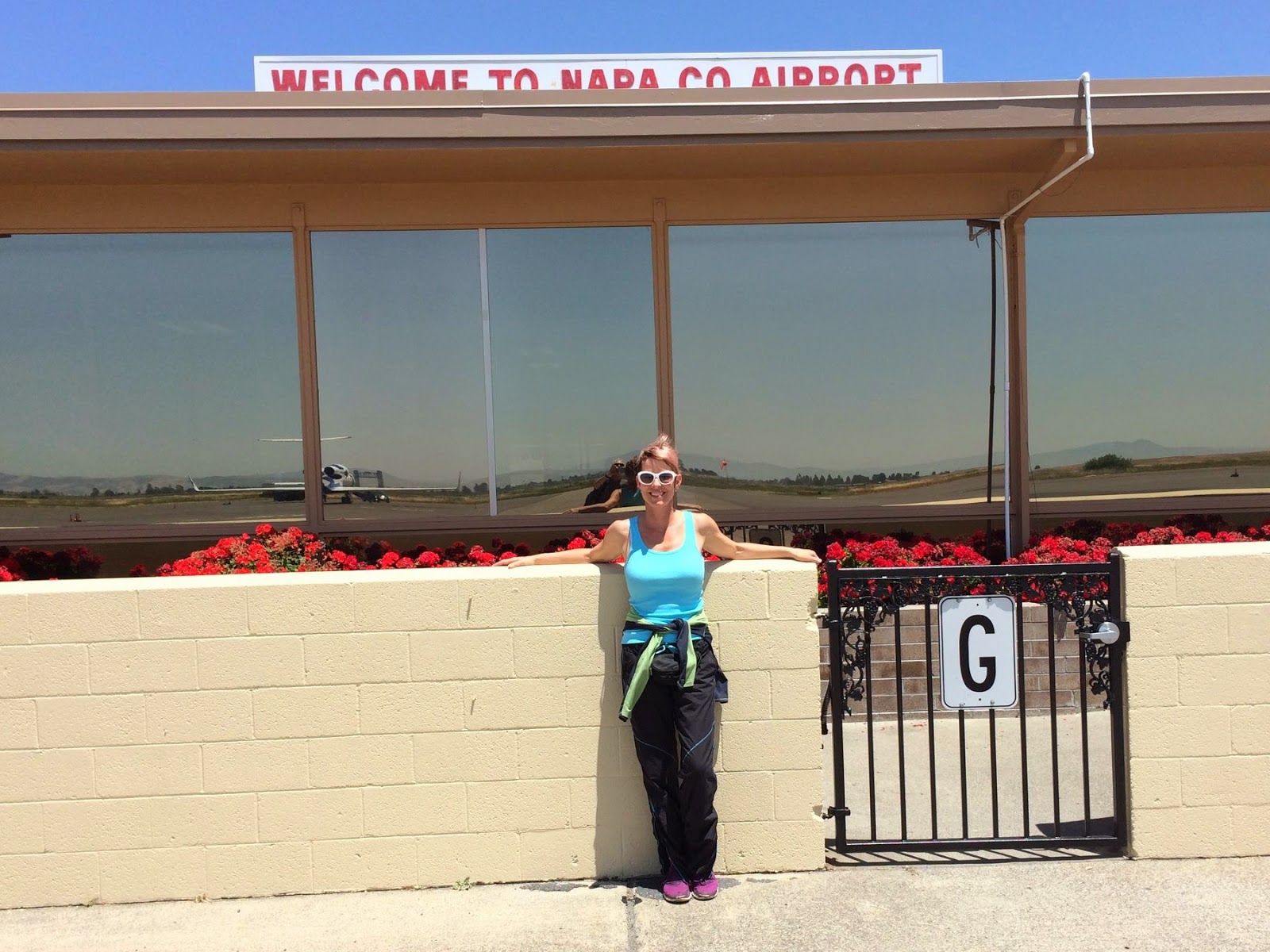 Well, it's not quite the first time I've been here, but it's J's first fly-in, and that's pretty much all that matters, no?

We're on one of those enjoyable extended Bay Tours, this time out of Hayward (KHWD), once again in CalAir's DA-40. The weather's perfect for it, and we have the plane for four hours, so why not just ... fly? And so we do: departing from Hayward we do the (always-rather-stressful) head-for-Lake-Chabot-and-wait-for-hand-off-to-Oakland-Tower-while-trying-to-remain-out-of-the-Class-C-and-Class-B-airspaces-and-simultaneously-try-not-to-hit-the-Oakland-Hills thing, then get the Oakland Tower transition along Interstate-580 (which I asked for rather than Interstate 880, mostly because I'm like that (and there was some sort of game on at the Oakland Coliseum which we would have had to avoid on the I-880 route)), then get quickly handed off to NorCal for the usual "remain well north of the [Bay Bridge] toll plaza and clear of the Class Bravo at all times" Bay Tour, then potter along at 110 knots or so past Downtown Oakland and Emeryville, destination the Golden Gate. So far so good.

My passenger J., a recent acquaintance (we have several mutual friends) who didn't seem too horrified by the idea of flying with me when I first asked, seems to be enjoying it, and I start to relax. This is her second time in a small GA airplane; the first was a long time ago out of Willits, an airport that I've visited a couple of times, and that isn't exactly the least exciting place to land or take off at. We head off over the Bay towards Alcatraz, which we circle a couple of times, then wander off towards the Golden Gate. I hand J. the stick and let her fly for a while; she's a bit nervous with that, and hands control back to me after a couple of minutes, but she does pretty well, and no one dies or gets arrested as a result of her flying. The Golden Gate turns out to be invisible under the stratus layer, so we go back down along the San Francisco shoreline for a while before heading across to Marin via Angel Island. J. seems content to mostly just watch things go by — as she says later, it's great being above it all, no? Yes, it is.

We then head off towards San Pablo Bay, passing San Quentin and the Richmond Bridge, ending up over San Pablo Bay at 3,000' so we can do some light maneuvers. Once again, I give J. control of the plane, and we do a few turns and things until she gives it back to me. She seems to be enjoying this too, but I suspect she's more comfortable just watching the world go by. I do a few steep turns to show her how that works, and she enjoys that, at least.

We head off towards the Petaluma River, fly up and around it for a little while, then head off towards Napa (KAPC). We join the pattern for runway 18R on a long 45 from Scaggs Island VOR, then get an extended downwind and then a wide left 360 out of the way as we wait for a rather fast Challenger to do the straight-in from seven miles out. We finally see him and join the pattern again, landing on 18R staying high to avoid wake turbulence. We taxi to transient parking; embarrassingly, I have to ask Ground the best way to get there and where to park (it's been a while, and there was some weirdo stuff with orange cones and maintenance along the obvious way; plus the Challenger was bearing down on us from the other direction...).

We get out and wander off to the terminal, then spend a few minutes relaxing quietly in the comfy chairs looking out at the apron and runways. There's a beautiful view of Mt Tamalpais shimmering darkly way off in the distance, and in the foreground there's a bunch of reminders of how the other half (or 1%) live, shiny and simmering in their own way (or maybe they're just glinting).

As we're sitting there, a bunch of people come in through the main terminal door from the parking lot looking for Jonesy's, the steak house that used to be in the terminal. But Jonesy's has been closed for a while now, and they leave disappointed. In fact, the terminal's quite dead; we're the only people there as far as I can see.

We eventually wander back out to the plane, with J. commenting that our plane looks nicer, newer, shinier, faster, and better-maintained than the other small GA planes out on the ramp. I'm not sure I quite agree (she would say that, wouldn't she?!), but it makes me feel proudly-amused (or amusedly-proud; maybe both). There's a Cirrus SR-22 sitting there next to our plane, and for my money it's the better airplane overall, but it's got a puzzlingly-bad paint job on it (aesthetically, anyway), so I guess we still look the hippest and sleekest and most modern of all. Not that that matters to me, oh no!

We depart Napa towards Concord and the Diablo Valley, and it starts to get a bit bumpy. This doesn't faze J., but she definitely notices the way the plane's reacting and the way it affects the controls. The view of Mt Diablo off to our left is dramatic (I get so jaded flying around the Bay Area), and J. gets an appreciation for just how extensive the Berkeley / Oakland Hills are for the first time (it's difficult to judge from the ground). We fly down Interstate-680 until I decide to do a detour out towards the Altamont wind farm, after which we fly back up past Livermore, then up Interstate-580 (it's been an Interstate kind of day in the best sort of way...), and over the Hills into Hayward, getting the old "Report Cal State Hayward" thing that always amuses me (I'm easily amused).

Back on the ground at the Green Ramp, someone else has parked in our designated space, and I fret and fume my way around the obstruction and park in the spot next to it, wondering if the Hayward Airport Parking Police will come and ding me for it. I have to steal the wheel chocks from the plane parked in our authorised spot (actually one of the club's other planes, but never mind) because they're the only ones that fit under the reduced-clearance wheel pants on the DA-40. I keep imagining Hayward Tower watching me take the chocks through their binoculars, but no one turns up to arrest me or anything (and I do at least put the other chocks in the right place under the Other Airplane).

While we're still there, the fueling truck arrives, and I discover that we used a fair bit less fuel than I expected. I guess all that paying attention to leaning and throttle / prop settings can pay off, but then the DA-40's a pretty fuel-efficient plane anyway. Back in the club, I tell Susie about the planes being in the wrong place, and feel better that this is an irritatingly-common thing with certain club pilots (I KNOW WHO YOU ARE!), and I won't get blamed for it. Not this time, anyway.

Later, I ask J. what the best bit was. "Oh, everything!", she says, which is an enjoyable thing to hear after a flight like that.