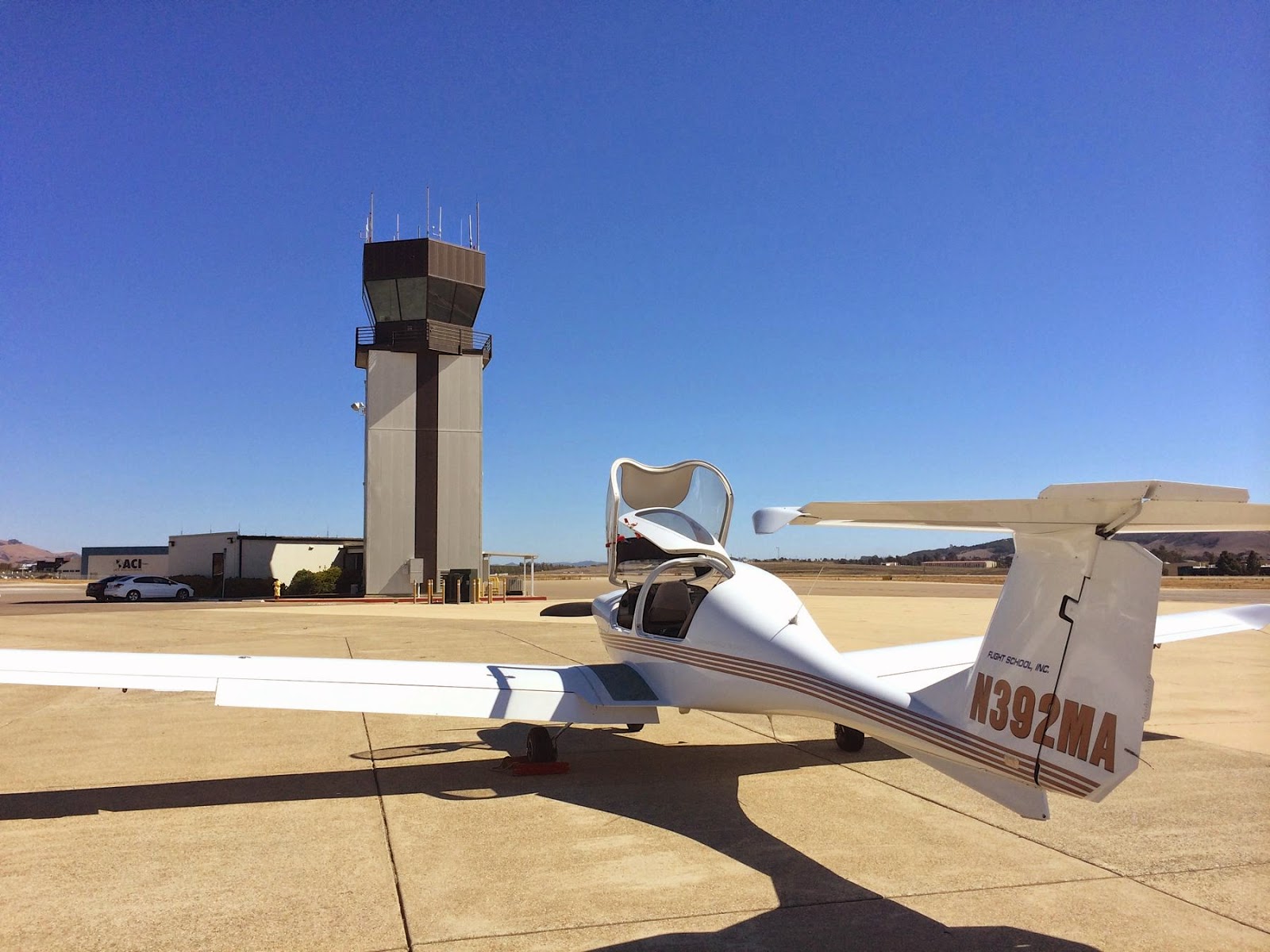 It's a beautiful warm cloudless California day. I do what I think is a nice smooth landing on San Luis Obispo's runway 29 in the DA-40, slow down, and turn towards the taxiway. Tower tells me to contact Ground on 121.6, and as I switch frequencies there's an ear-splitting ELT (emergency locator transmitter) going off on frequency. I very quickly suspect it's me, even though I landed without a bump, and they're only supposed to go off automatically like that after a severe accident.

I'm rattled enough by this — and by trying to debug it on-the-fly — that I stop before the hold short line while exiting the runway, and try to contact ground over the noise. Ground responds, then admonishes me severely for not pulling over the hold-short line (it takes two tries for me to hear Ground properly over the noise). And he tells me my ELT is going off. Guilty as charged on all counts, I think, but my brain's lost forty points of IQ because of the noise and the sudden stress of the ELT going off, and I just forgot. I taxi to the transient parking in front of the Jet Center, and a guy comes out and marshals me in. I shut down the engine and avionics, and realise I don't know how to turn this particular ELT off. It doesn't take long to find the reset switch, but it's mortifying a) to have the ELT go off; and, b) to not be able to turn it off for several minutes.

Even worse was the knowledge that I did not handle the whole thing well at all. I should have just ignored the ELT until I was parked (it's not like it's a long taxi at that point); and I should have immediately reset the bloody thing instead of wondering where the hell the reset actually was. Instead of looking for the panel, I tried to find it in the manual. Not the sharpest tool in the toolshed, am I? Amazingly, perhaps, this is the first time I've ever been in an aircraft when the ELT's gone off.

Still, as far as I know, no people or cute furry animals were harmed in this episode, and I survived to depart KSBP a few hours later… only to have the bloody thing go off again at least twice in mid-air. But that's for later.


* * *
I've planned a trip to San Luis Obispo for several months, mostly to visit John at his new place down there, but also just as a good excuse for lunch and a day's getaway from Oakland. Life kept getting in the way, of course (work especially — I travel a lot for work, often with only a few days' notice, and planning more than a few days ahead can be a frustrating experience). But here I am with a day off and several weeks without being sent to New York or Minneapolis or Los Angeles or wherever, so it's off to San Luis for the Billion Dollar Hamburger (or so it sometimes seems with the cost of flying).

I arrive at the California Airways office around 9am, hoping the eternal summer stratus layer will burn off early. But it's officially OVC 1,400 (overcast at 1400 feet), and forecast to stay that way until at least 10am, so I can't depart VFR for a while. Not for the first time in the last year or two I rue the fact that I'm no longer IFR current; this is exactly one of the sort of situations I got the instrument rating for in the first place. Oh well, maybe one day I'll get around to doing the full proficiency check; maybe not. We shall see. In the meantime I wander off to the local Starbucks (not my kind of place, but hey...).

But there's also a more interesting weather issue on the horizon: an unusual Pacific storm system coming down the coast promising light rain and maybe even thunderstorms later today. Rain at this time of the year around here is unusual, to put it mildly; plus we're in a prolonged drought. So it feels ironic that the only day I'm likely to be flying for a while may end up being pre-empted by the sort of unusual weather we desperately need. At the very least I'm going to have to come back earlier than I'd like, to get in before the storm.

In any case it starts clearing by 10am, and I depart Hayward (KHWD) at 10.45, destination San Luis Obispo (KSBP), my tentative VFR route KHWD, VPEMB (the Embassy Suites, a local landmark and VFR reporting point), KRHV, E16, KSNS, KKIC, BRALY, KPRB, KSBP. Not necessarily the shortest or most direct route, but it keeps me out of a restricted area, keeps me away from some sharp terrain that often generates unpleasant turbulence, and keeps me close to a bunch of airports in case of trouble. This is a route I've done with minor variations a bunch of times in the last fifteen years.

Hayward Tower hands me off to NorCal on the downwind, and I quickly get cleared into the Class B at 5,500', my cruise altitude all the way to San Luis. I climb in the face of a steady stream of 737s and bizjets arriving for Oakland and Hayward, and get vectored several times for traffic — just the usual for this sort of departure. At 5,500' I level off and notice that the forecast 30 knot headwind for much of my journey is real — it wasn't an exaggeration or a pessimistic prediction. So for the next forty minutes or so — until well clear of King City — I have a TAS of something like 130 knots giving me a ground speed of about 100 knots. I'm not dumb enough to believe this will work for me coming the other way, and, sure enough, hours later on the return trip I have little more than a 5 knot tailwind for most of the trip back. The rest of the trip down is pleasant and uneventful until the ELT Incident; the landscape below me is typically Californian, rugged, mostly parched, and very familiar to me both from the air and from the ground.

After landing, parking, and resetting the ELT, I meet John at the Jet Center, and we go off to lunch. We go to Taste on Broad, a nice grownup-Hip sort of place with excellent food (I ordered the three sliders special which nicely did the trick), and friendly staff. John and I talk about instructing, flying, work, etc., down here, and SLO life in general (it's different from life in Berkeley or Oakland, that's for sure). He's covered most of the printable things in his blogs so I won't repeat them here, but it's an animated and very pleasant conversation. It's good to see John again.

After lunch we drive the short distance to John's place and down some strong home-made espresso over more enjoyable talk and gossip, but then I have to leave so I don't get caught in the promised storm. On the San Luis ramp in front of the Jet Center there's a rather odd-looking white-and-orange Navy Cessna 337 with only a rear engine, and instead of the forward engine, a long, thin, extended nose probably full of weirdo surveillance gear. Two crew-cut guys in business casual are walking towards it when I'm passing it, so I think twice about taking its photo. A few minutes later it's climbing out of San Luis just behind me.

I depart with flight following back to Hayward; the route back is basically just the route down to KSBP, reversed. Not much to report about the flight back except (as noted above) the strong headwind coming down turned into a pathetic tailwind going back, there seemed to be a lot more turbulence this time (too much for the autopilot), and the ELT goes off twice in quick succession somewhere abeam Salinas, in smooth, calm air. This time I'm prepared for it and immediately reset the ELT as soon as I hear it, but still, it's worrying.

The only other thing I took much notice of was that I had a weird hand-off between NorCal Approach sectors somewhere around Fremont. I usually check in on hand-offs with something like "NorCal Approach, Diamond Star N392MA, level at 5,500" or similar, and the controller typically just responds with an altimeter setting for a nearby city, and that's that. This time the controller responds to my checkin call with a gruff set of questions about where I'm going, whether I'm VFR or IFR, etc. All this despite having been on flight following continuously since arranging it with KSBP tower, and having one of the previous NorCal controllers asking me unprompted whether I wanted the Moffet / Dumbarton route back to Hayward (I'd replied with something like I'll take Reid-Hillview and up the hills, which satisfied him). I give my details to the new controller, who ends the exchange with  something along the line of "Next time, it'd help if you tell me where you're going, whether you're VFR, your altitude, etc.". OK, if you say so…. A dropped hand-off? I don't know, but only a mild irritation in any case.

Closer to Hayward I can see some interesting-looking clouds over the North Bay as the system rolls south towards us — the layered lenticulars in particular look kinda threatening and out-of-place in this most benign of all weather worlds. I'm sort of glad I got back early, but I'm betting the storm will be pretty dismal, rain-wise [later: yes, a little bit of warm drizzle only].

I park the plane back on the Green Ramp, then go back to California Airways to squawk the ELT problem. Not a bad day's flying, really.
Posted by Hamish at 9/17/2014 07:35:00 PM
Email ThisBlogThis!Share to TwitterShare to FacebookShare to Pinterest
Labels: ksbp, vfr