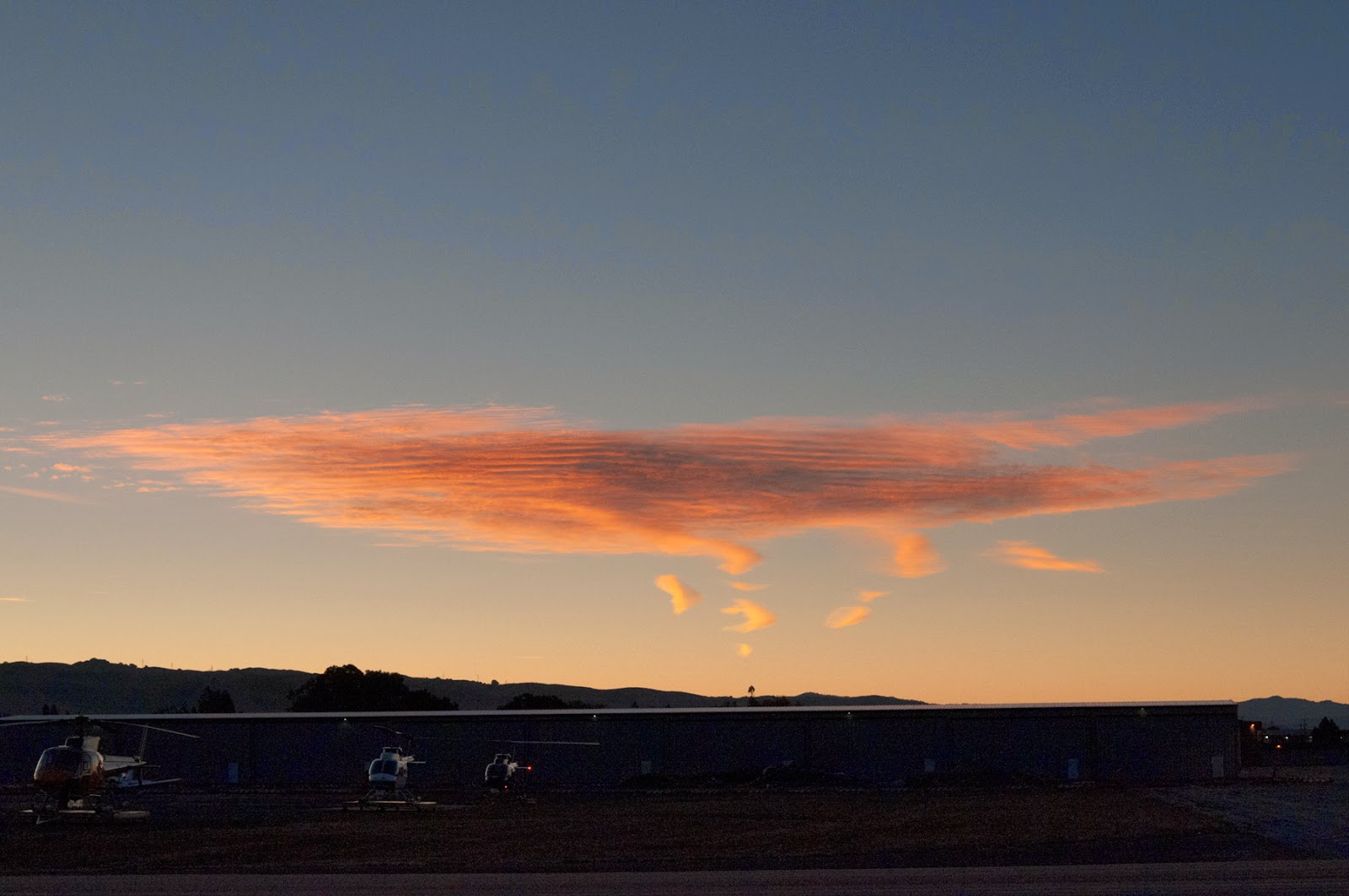 7am, Hayward Executive Airport (KHWD). I currently work a lot on New York time, so I'm used to being at work this early, but it's still a slightly weird experience looking forward to a flight in the club's DA-40 as a passenger — I've never been in the right seat of a DA-40 before. I watch the sunlight hit the only clouds in the sky and the news guys warming up the helicopters just down the line. A wonderful sight; and the weather's perfect for what we're about to do.

I'm waiting for Arpad M., another club member, who's going to pilot us up to Obsidian Ridge (near Clear Lake and Lampson Field, 1O2) and then back via Napa to do some aerial photography of the two vineyards he co-owns. I'm not too sure we'll get any useful images, for several reasons: firstly, most of my aerial photography experience has either been air-to-air or has been done with a full window removed on a 172, and the DA-40's tiny opening side windows probably won't cut it (they're more like small vents than windows); and, secondly, it's probably a little too late in the year, and the sun will be too low and in the wrong place. But it's worth a try if Arpad's up for it, and it surely can't hurt. I've brought along my two main DSLRs — a Nikon D800 and my old D300, with a bunch of assorted lenses.

Arpad arrives and pre-flights the plane. We discuss the goals and the problems a bit, and end up with an informal plan that amounts to, well, "let's see what works..." once we're over the vineyards. Which works for me, but I'm a pessimist at heart.

Once in the air heading north(ish) over the East Bay it becomes obvious my original plan of sticking the lens a little way out the window on my side and using the cameras' live view screens to frame and focus (etc.) just isn't going to work. And neither is just looking directly through the viewfinders — in both cases the angles are too difficult (I'm not a contortionist) and the live screen view is too small and washed out by the light in the cockpit. I should have known — and I even have a separate much larger properly-shaded screen I use for live viewing of video work with the D800 that I could have hooked up and used. Oh well, next time.

In the meantime, we fly on up through the clear early morning air towards Obsidian Ridge; Arpad's a good pilot, better on the details than I am, and it's enjoyable just being able to look out without worrying too much about altitude or airspeed. I have to admit I didn't know where Obsidian Ridge actually is until now, and even flying up there I still had only a hazy idea of the lay of the land around it — this isn't a familiar part of the world for me, unlike the coast to the west or the Central Valley to the east, both of which I know well from the ground and the air. I do know where Clear Lake and Mt Konocti are, though, which is better than nothing — Obsidian Ridge is near enough to the latter that I could find it if I had to. It's beautiful, rugged country up there, and there's a bunch of new age and hippy settlements down in the forests along with the vineyards and small farms dotted around the area.

Once we get to Obsidian Ridge, I start taking photos in earnest. We fly around the vineyard — clearly visible on the slopes beneath us, surrounded by forest and one or two other settlements —a bunch of times and I quickly get the lay of the land and start taking photos. Unfortunately, as predicted, the sun's a little too low and southerly now, and although the air's pretty clear, having to shoot through the canopy degrades the image a lot, both with internal reflections and with the poor visual quality of the plastic. I try a few randomly-aimed shots out the side vents but they don't work too well either. Oh well, once again. We circle around several times looking for different angles, etc., and I get a lot of shots, but I'm pessimistic whether any of them will turn out well. But I can see what Arpad's aiming for — the vineyard surrounded by forests with the quiet drama of the Mayacamas mountains as a backdrop. After I get maybe a hundred shots of wildly-differing quality and viewpoint, we head on back south(ish) towards Napa. Our next photo point is Poseidon vineyards, Napa Carneros, and I recognize it fairly easily from the air from some distance out. It's down near the bridge across the river, in Napa Airport's airspace, and as we approach Arpad calls up Napa (KAPC) and advises them we'll be circling here doing photography for a while.

And so we do — but I still have the same problems with aiming the cameras and the glare from the cockpit canopy, and after another hundred or so shots, I have to basically admit defeat. There's probably a couple of good(ish) shots, but I'm really not pleased by the way they're turning out in general. 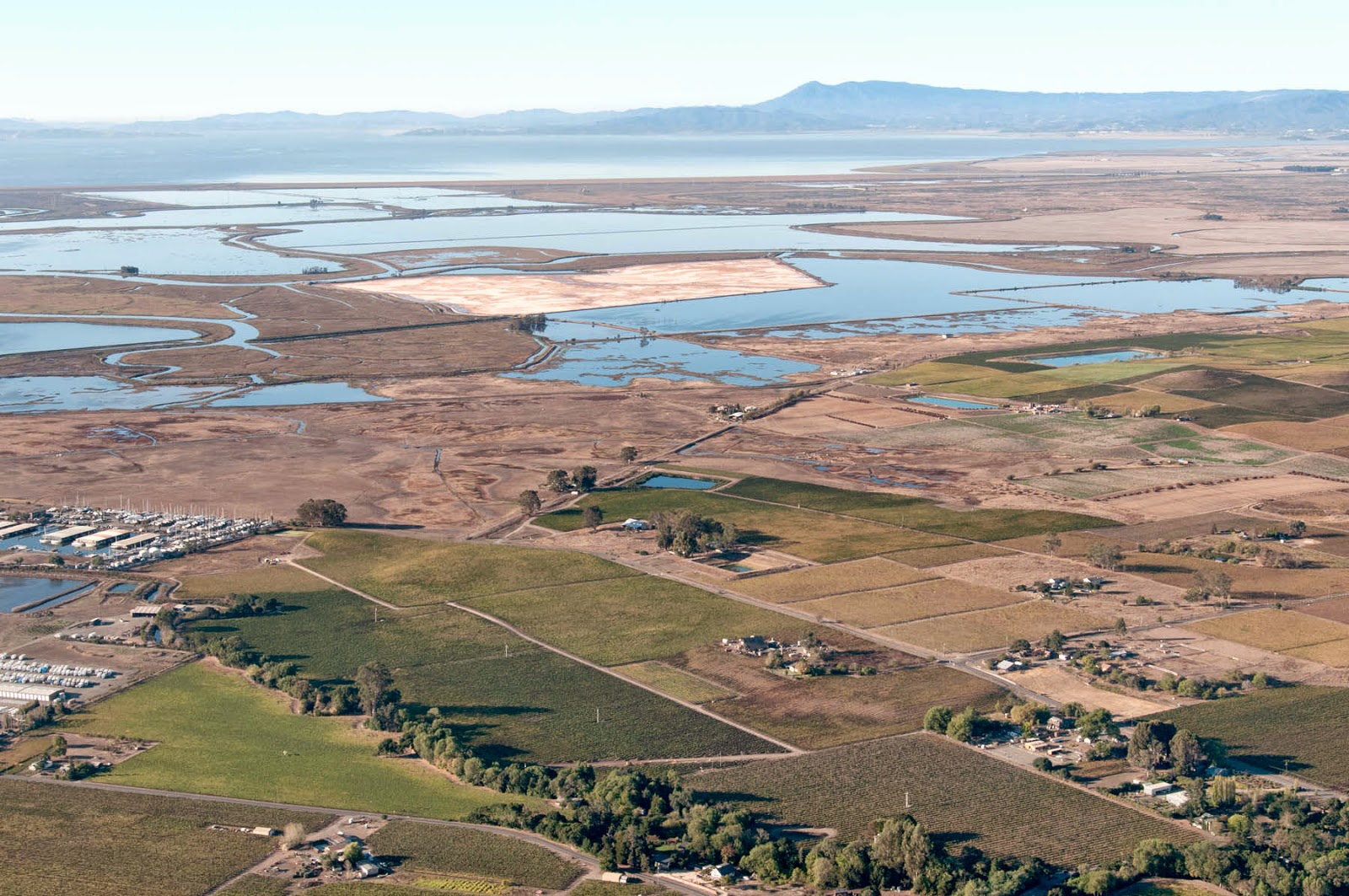 We head off back towards Hayward after a while, and land at about 9am. It's been an enjoyable flight
— some wonderful landscapes and sights — but I can't get over how irritated I am by the likely poor results. Next time I'll try the external monitor for (at least) framing and let the camera do its own focusing and exposure.

A lot of lessons learned, but expensively (sorry Arpad!). But hell, it was an enjoyable ninety minutes or so of flying, even if I was in the right seat.

Posted by Hamish at 10/13/2014 04:49:00 PM
Email ThisBlogThis!Share to TwitterShare to FacebookShare to Pinterest
Labels: photography, vfr

The shots posted here look fine - are they the best of the bunch, or not your photos at all? (Sorry if that's a dumb question, I don't know the scenery pictured and there aren't any captions...)

Jeremy -- thanks. They're my shots, but they really don't bear looking at in close-up -- I can do a lot better than this...