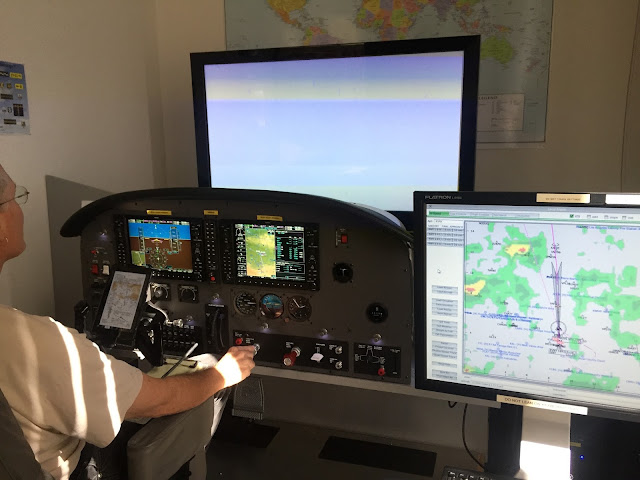 Somewhere on the (simulated) ILS RWY 16R into Van Nuys (KVNY) I can hear John clacking away on the keyboard behind me and to my right. Cool! I think — he's cooking something up to make my life harder. Sure enough, closer in on the approach, I start hearing thunder over the sound of the engine, and drops of water start hitting the screen. Not as visually disturbing (or just disturbing, in its own way…) as the prancing deer he had on the runway on the simulated FREES8 departure out of Santa Rosa (KSTS) a short time earlier, but in real life much more dangerous. But this isn't real life, and, sadly, the simulator doesn't rock or shake or buck wildly in the storm, and after telling John in real life I'd back right out of this approach now with ATC help, I fly on regardless, successfully breaking out a little above minimums and landing as well as one can in a sim like this (i.e. badly).

I've done this approach in real life (see e.g. "One Six Right"), and the real life version's much more scenic (especially at night), but I don't have the luxury of being able to do it in real life until I get IFR current again. Which is why I'm here at the sim, doing the remainder of the IPC with John. The time goes quickly, with a barrage of approaches, holds, departures, prancing deer, instrument failures, etc., and after what seems like a sweaty forever, I'm current again. It's been a long trek back, but worth it, I think, and I start thinking about a real-life trek to Van Nuys or Burbank later this year in one of the club's DA-40s, with the usual IFR leg into and back out of the LA basin. We shall see, as I keep saying.

Later, John sends me the picture above of the God View from the session, with the storms bearing down on the approach from the west. The joys of simulation….
Posted by Hamish at 6/13/2015 06:30:00 PM
Email ThisBlogThis!Share to TwitterShare to FacebookShare to Pinterest
Labels: ifr, khwd, sim